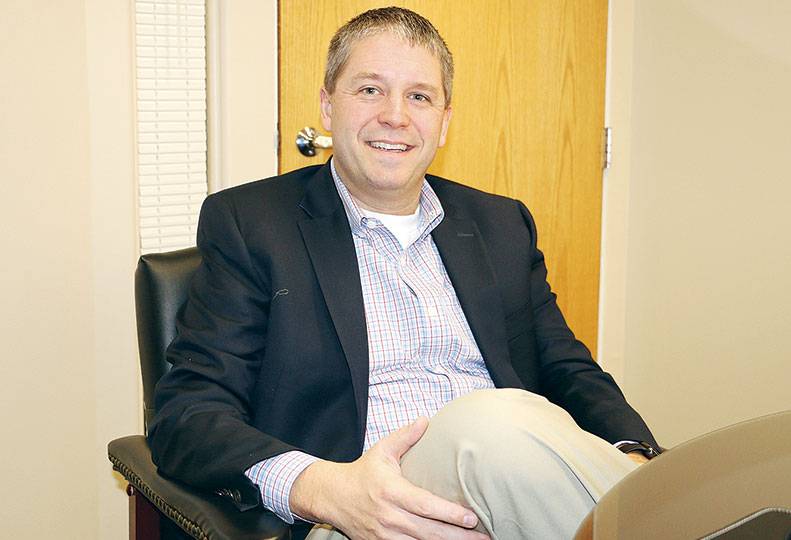 -—Virginia Thomas
Eric Christiansen, managing member of Spokane-based Quantum Financial, says the company has about $350 million in assets under advisory.

Quantum Financial Planning Services Inc., founded here by Al Herman and Houston Scrudder in 1979, got on the financial planning train relatively early, says Eric Christiansen, certified financial planner and a managing member with the company. Since its founding, he says the company has maintained a focus on guiding their clients down the right track by working together as a team for each client.

“Back in the ‘70s and early ‘80s, there wasn’t much financial planning going on, so (Scrudder) was one of the visionaries in doing financial planning,” Christiansen claims. “The biggest thing for us is making sure we’re doing comprehensive planning and doing the right thing for our clients.”

Quantum Financial, which also has an office in Kirkland, Wash., is based in the One Rock Pointe building at 1212 N. Washington, where it has occupied the same 3,400-square-foot space since developer Walt Worthy constructed the building in the late 1980s.

Christiansen says Quantum Financial has 10 employees at its Spokane office and two at its Kirkland location. Between the two offices, Quantum Financial serves about 450 clients and has about $350 million worth of assets under advisory.

Christiansen says most new clients are between 55 and 65 years old and are looking at retiring within the next five to 10 years.

“We work with savers,” Christiansen says. “They’ve saved their whole life. They’ve done it on their own; they had a good mentor that said, ‘Make sure you’re putting in 10 percent, 15 percent,’ and now they’ve got this chunk of money and they want to make sure they’ve saved enough.”

He says that when Quantum Financial takes on a new client, several financial planners will meet with the client in a series of meetings to ensure every aspect of the client’s situation and desires are taken into account when creating a plan.

“Then we meet with our clients every six months after that and always go back to that plan,” Christiansen says. “Are we still on track, or has something changed so that we need to change our plan? It’s not just doing the financial plan and putting it on the shelf.”

Many clients are concerned about whether or for how long they can remain in their home after retiring, Christiansen says.

“The average client wants to stay in their home for as long as they can, and we want to help them to be able to do that,” Christiansen says. “If they’ve (can) afford to bring in home health care, that’s the thing that you try to do.”

Christiansen asserts that one of Quantum Financial’s strengths is its team approach. He says that typically multiple certified financial planners will attend a client meeting so that a sort of succession plan is in place.

“We’ve got (a financial planner) in their 70s, somebody in their 40s, 30s, and 20s, so we’ve got a multigeneration team so that we can be around for the next 200 years,” he says. “If something happens to me, the client knows that we’ve got a process and systems in place, that our firm can still help them even if I’m not here.”

He says that happened last summer, when certified financial planner John Nord retired after 36 years with Quantum Financial. When Nord was preparing to retire, Christiansen says the team made sure to acquaint themselves with Nord’s clients, a process that took roughly three years.

“We had very few clients leave during that process,” Christiansen says.

Christiansen says the company is growing, both in size and in revenue.

“We’ve added a couple of new team members in the last year,” he says. He says Quantum Financial sees annual revenue growth of about 15 percent.

Financial planners tend to stay with the firm for decades. Scrudder is still at the firm after 39 years. Christiansen says he has remained with Quantum Financial for 23 years.

“I started here as an intern in my senior year at Gonzaga, and I’ve been here ever since,” Christiansen says. “Jordan (Curnutt), one of our other planners, he’s in his late 20s, he started as an intern here when he was at Eastern. This is his only job as well. I don’t talk to too many peers that are in their 40s that have been at one job their whole life. The plan is that this will be my job my whole life. I love what I do.”

Christiansen says that the other financial planners share his passion for helping clients, and that’s why they remain with Quantum Financial for so long.

“We’ve got clients that have been here for 30 or 40 years,” he says. “That’s pretty cool, to see that long-term relationship and know that you’ve helped these people throughout the years.”

One recent concern in the financial planning industry, Christiansen says, relates to fiduciary rules. A U.S. Department of Labor rule that had been set to go into effect April 2017 would have required financial advisers to act as fiduciary advisers, placing clients’ best interests ahead of their own.

While that rule was ultimately struck down in a circuit court of appeals, the SEC earlier this year proposed an investment advice rule. Christiansen says whether or not that rule is implemented, fee-based Quantum Financial’s planners are already on board with keeping clients’ best interests in mind.

“We’ve always been a fiduciary for our clients,” he says. “People need to be doing what’s in their clients’ best interests and we’ve thought that to be the best thing all along.”