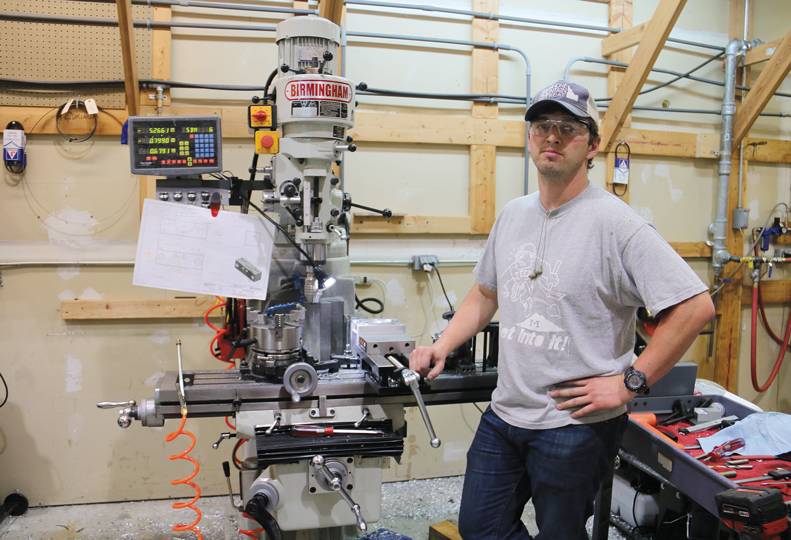 Top executives at RadMax Technologies Inc., a Spokane-based research and development company, say the company is positioned to launch innovative new motor technology that has been attracting attention from companies and governments here and internationally.

RadMax Technologies has been working to refine a rotary engine technology that the company says has a myriad of potential applications and little competition.

The RadMax device, called the RadMax TPXG, can be an internal combustion engine, a compressor, a gas expander, a pump, or it can perform a combination of these functions, depending on how the intake and exhaust ports are configured.

Lynn Petersen, vice president of business development, says that the essential technology of the device relies on the expander, or turbine, which extracts energy from a pressurized flow of gas or liquid.

“The two areas we’re working on are natural gas distribution systems and refrigeration systems, because they use what they call throttling valves to reduce the pressure,” Petersen says. “(A normal throttling valve is) like when you have air in a balloon, and you let it out to reduce the pressure. Our device actually captures that pressure release, we create rotary motion with it, and we generate electricity.”

Paul Chute, RadMax CEO and chief financial officer, says the company has focused on creating a simple design with few parts relative to similar devices. For example, where most diesel engines have more than 1,000 distinct parts, RadMax’s diesel engine prototype has 75.

The simplicity of RadMax’s designs allows such engines to be produced in smaller scales while retaining high energy output, Chute asserts.

The company’s headquarters and a manufacturing lab are located at 7520 N. Market, in the Dennis Court building. Chute says RadMax and its parent company Regi U.S. Inc. have seven full-time employees and works with several consultants.

RadMax has received two patents, has filed another six patents, and is working on several additional patents, Chute says.

RadMax’s technology has received attention from some Canadian natural gas companies that are interested in partnering with RadMax on devices for pipelines, Chute says.

RadMax is also a semifinalist in a funding competition sponsored by the Natural Gas Innovation Fund, which is a part of the Canadian Natural Gas Association.

Petersen says several natural gas industry members contribute to the fund, the purpose of which is to find and promote new technology that will benefit the industry.

“They also bring in the Canadian government agencies and some other people who could also contribute financing to this,” he says.

About 30 companies entered a project for consideration. Petersen says both of the projects RadMax submitted advanced to the semi-final round, where 12 total projects are vying for funding.

One of those projects is a unit that is a combined expander, electricity generator, and compressor that RadMax is developing for use on a natural gas pipeline or wellhead. Most systems release pressure by venting small amounts of natural gas — too small to be used — through pneumatic control devices. Petersen says RadMax’s device can either replace these pneumatic instruments with an electrical version that doesn’t use natural gas pressure or convert the pneumatic device into one that uses compressed air instead of natural gas.

The second project under consideration for funding by the Natural Gas Innovation Fund is a small natural gas compressor for use at oil wells. Petersen says the device recompresses gas that normally is vented into the environment and instead redirects the gas back into the flow of mixed oil and gas. Further down the flow, the gas can be separated from the oil in quantities large enough to be used for fuel.

“These small amounts of gas that are vented may not seem like much, but, add it all together, and it’s a lot,” Petersen says. “There are compressors out there that do this on a larger scale, but nothing on a small scale like what we’re proposing.”

Petersen is optimistic about RadMax’s chances of success in the Natural Gas Innovation Fund competition.

“We’ve gotten some feedback that looks like we’ll have a pretty good chance of these projects getting funded,” he says.

The finalists of the competition will be announced in September.

Other applications for RadMax’s devices include air conditioning, capturing heat from waste gases produced from landfills, and food manufacturing.

Chute says RadMax has fielded interest from countries around the world and is in the early stages of discussions with several international companies.

Closer to home, RadMax sold its first finished product, a combined expander and generator, to the U.S. Department of Energy earlier this year.

As for RadMax’s other projects, Chute says RadMax is building a small unit for use in monitoring natural gas pipeline systems. He says the company hopes to see the device completed by the end of this year and available for commercial purchase by mid-2020.

“We want to develop the prototypes and then license the technology to the major players already in these markets,” Petersen says.

“We’ve funded it to date with family and friends, but we are looking for some big investors to step in,” Chute says.