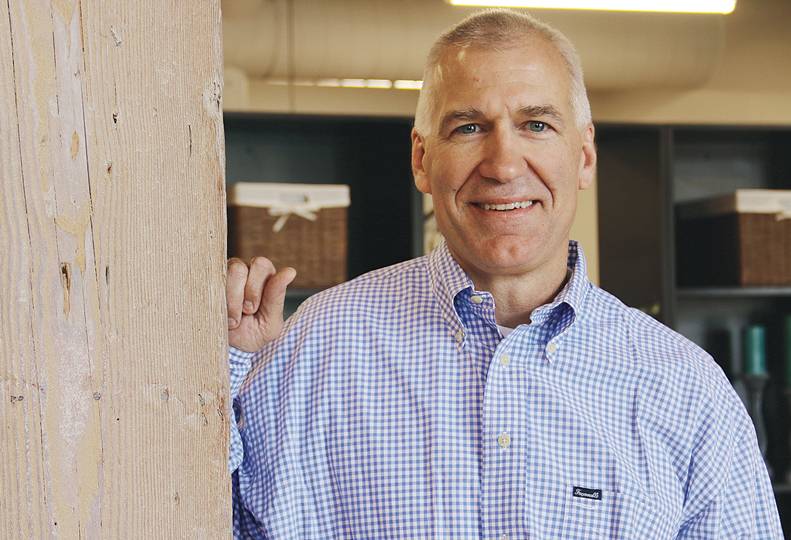 Paul Mitchell, patent attorney at Spokane-based Rainier Patents PS, has intentionally maintained a gradual rate of company growth that he contends lends itself to better client interactions - and eliminates the need for formal staff meetings.

It’s a methodology that Mitchell, who also founded Rainier, says has lent itself to the firm’s success.

“It’s the same status quo, if we need to grow then we will, but growth is not the mindset,” Mitchell says.

The small patent and intellectual property law firm currently employs four patent attorneys, two of which work remotely. The firm brought on both within the last two years; one is based in Washington, D.C., and the other is in San Diego. Rainier also employs two full-time support staff members and a part-time bookkeeper, he adds.

“When you get to a threshold number of people, meetings become mandatory,” he says, adding that eliminating the bureaucracy typically necessitated in larger firms allows the team to keep clients more fully involved in the process and it makes it easier to bounce ideas off other members of the firm.

“Clients are better served that way,” he contends.

Rainier is located at 216 W. Pacific in the historic Commission Building, where it moved roughly a year and a half ago. The understated building is just west of the Spokane headquarters of Thomas Hammer Coffee Roasters and just east of the Washington Cracker Co. Building.

The 2,000-square-foot former fruit and produce storage space was renovated at the time the firm moved in, but Mitchell says he opted to retain much of the space’s original character. Large wood poles are cracked from years of having axes used for opening shipments thrust into them, and the original flooring and iron detailing in the ceiling are preserved, for a mix of old and new.

Mitchell adds that Rainier in particular focuses on patent portfolio management and aids companies in determining what ideas have enough value to require protection. It also helps clients determine where a business portfolio is heading.

Patent lawyers are required to have a degree in a science field to take the patent bar examination, and Mitchell says he got his bachelor’s degree in biology from Eastern Washington University, while the other three attorneys hold degrees in computer science fields.

“We kind of live on that island between technology and law,” he says, adding that working with inventors and engineers can be very humbling.

“It keeps it in perspective,” he says. “Everything I think I know, (they) know more.”

The firm works with several companies based in Spokane and a few Fortune 500 companies, Mitchell says, but its main clientele tends to be regional companies.

He adds that the firm’s client load at any given time varies, as most tend to go through cycles of product development.

“The big companies tend to be really consistent though,” he says, “Which helps to streamline the workload month-to-month and year-to-year.”

Steven Thomas, patent attorney with Rainier, adds that Spokane has a relatively high number of patent firms in comparison to similar markets, which both Thomas and Mitchell attribute to the business and community environment in the Spokane region, as well as the relatively low cost of living.

Despite the comparatively large number of patent firms in the area, Mitchell says he doesn’t view Rainier as being in competition with other Inland Northwest firms and describes the local market as more cooperative.

Mitchell says he can see the patent field in Spokane growing over the next few years as a result of the focus the city and investors have placed on startups and new technologies.

“It’s exciting to see all the people and activity. … Whatever we can do to facilitate technology growth in Spokane, we’ll contribute to,” he says.

Between 2000 and 2015, companies based in Spokane County filed just under 1,200 patents, according to the U.S. Patent and Trademark Office. Data was not available for 2016 to 2019. During the same period, companies in Washington state filed just over 86,500 patents, placing it in the top 15 states that filed the most patents during that time.

Mitchell says he doesn’t actively track the number of patents Rainier has filed, but estimates that since its inception, the firm has drafted hundreds and prosecuted thousands of patents for clients.

Mitchell says he doesn’t think those looking for patent representation will have any problem finding a qualified attorney in the Spokane area, though he notes that it isn’t uncommon for companies and inventors to contract with patent lawyers outside the area in which the company operates.

“I don’t think that any company is not going to come to Spokane because of a lack of patent attorneys,” he says.