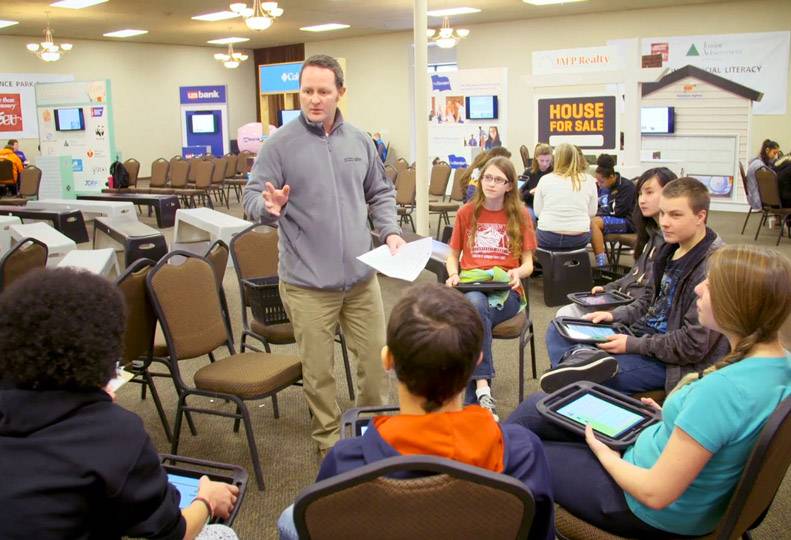 Junior Achievement will partner with Spokane Public Schools for the second year in presenting middle school students with a day of hands-on experience with financial challenges they’ll likely face as adults.

About 1,900 Spokane-area students, including 110 students from Cheney School District, will learn about finances in real-world simulations this fall and next spring, Banuagh says. About 800 students, mostly from Spokane Public Schools, took part in the program last school year, the first year it was offered here.

For the fall session, The JA Finance Park mobile unit will be set up Nov. 28 through Dec. 9 at the Shriners Event Center, at 7216 W. Westbow Blvd.

The mobile unit will be transported here via semitrailer, and components will be assembled at the Shriner’s Event Center to simulate a business park with 8,000 square feet of interactive space.

The JA Finance Park has kiosks that correlate to 16 household budget expenses, including housing, groceries, daycare, and transportation.

Dianne Volz, a teacher at Salk Middle School whose class last year participated in the JA Finance Park, says the program enabled students to apply what they had learned in class.

In preparing students for the program this year, she’s leading students through a 12-lesson plan that will cover income, investing, financial institutions, credit, debt, insurance, and budgeting options.

At the JA Finance Park, each student will be handed an iPad and assigned an adult identity, including a job, annual household income, marital status, and family situation to use as the basis of their budgeting experience, Volz says.

Groups of six students will be paired with a volunteers from the business community who will counsel them throughout the day as they weigh budgeting options, she says.

“It’s neat to see the students who are 13 and 14 years old interact with community volunteers,” Volz says.

The volunteers also see the positive side of students that age, she adds.

Volz says she welcomes the addition to the financial literacy curriculum that the JA Finance Park provides.

“This has increased our time spent on it and has given us a new way of presenting it in a fun, interactive experience,” she says.

Community volunteer Kevin Campbell says JA Finance Park goes beyond the classroom to introduce students to skillsets that will help them make responsible decisions for years to come.

“The difference between responsible financial planning and just not knowing can lead to decades of putting themselves ahead or digging themselves out of a hole,” says Campbell, a Spokane-based lending manager for Boeing Employees Credit Union.

Were it not for programs like JA Finance Park, students might not think about the juggling act parents perform to manage a financial budget, he asserts.

After students go through the program, though, he says, “I’m pretty sure there is a higher level of appreciation of what parents do and of the sacrifices they are making on a daily basis to support children.”

He says the life scenarios posed by the program encourage students to think critically about their financial decisions.

“For many students, it’s probably the first time they start thinking at that level,” Campbell says.

The program also could encourage more students to start thinking about college at a younger age and preparing for it financially, he contends.

David Moore, Seattle-based president and CEO of Junior Achievement Washington, says the JA Finance Park experience can have a profound effect on the students’ frame of mind regarding personal finances.

It’s not just youth who learn from the experience, Moore says. JA Finance Park gives business leaders an opportunity to find out how challenging it is to teach, and teachers find out how much knowledge businesspeople have.

JA Finance Park is funded largely by Junior Achievement through sponsorships and donations. Participating schools also contribute to the program.

Junior Achievement, which has its U.S. headquarters in Colorado Springs, Colo., operates numerous finance parks around the country, he says.

In Washington, JA Finance Park has been offered for 10 years at permanent facilities in Auburn, where the program serves 10,000 students annually.

The program also has been offered for five years at another permanent facility in Yakima, where it serves 4,000 students annually.

“The scenarios and modules set up through the mobile unit are no different than those at Junior Achievement’s permanent structures in Yakima and Auburn,” Moore says.

Moore says the Spokane area has the highest priority in the state for a new mobile facility, although Junior Achievement Washington also hopes to use the mobile JA Finance Park in Snohomish and Whatcom counties in northwest Washington.

Most other Seattle-area students can be bussed to the Auburn site, he says.

Moore says he anticipates that the number of students served by the mobile JA Finance Park will continue to grow here and in other communities, because the curriculum that accompanies the program helps schools meet new state-mandated financial literacy requirements.

The Office of the Superintendent of Public Schools adopted the new kindergarten-12th grade financial education standards in September.

Junior Achievement is an international nonprofit organization that works with businesses, schools, and other organizations to provide financial literacy, work education, and entrepreneurship programs for youths in grade school through high school.

The organization was founded in Springfield, Mass., in 1919.