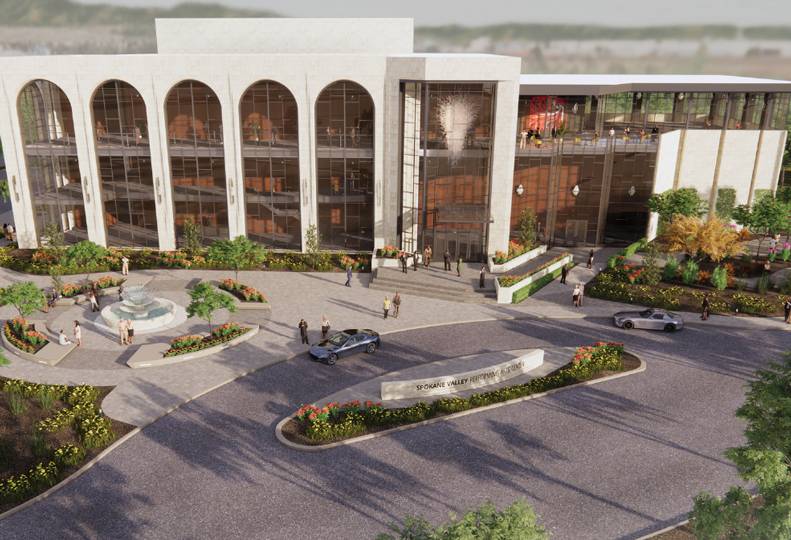 -NAC Arcjhitecture
The envisioned Spokane Valley Performing Arts Center is expected to be built in the Mirabeau Park neighborhood of the Valley.

Yvonne Johnson, executive artistic director for the Spokane Valley Summer Theatre, says the envisioned site for the theater is next to the Tru by Hilton hotel, at 13509 E. Mansfield, in the Mirabeau Park neighborhood.

“We need more arts and culture here, and SVPAC will help drive the economy, hospitality, and tourism,” Johnson says.

The construction of the performing arts center will be financed through State Bank Northwest, according to Johnson. A five-year capital campaign for the project now is entering its second year. Thus far, SVST has raised $12 million--or a third of the project cost.

Groundbreaking is expected to occur in September 2022, with project completion slated for February 2024. The first show would be scheduled for June 2024, if that timetable is met.

Spokane-based NAC Architecture is designing the performing arts center, and Garco Construction Inc., also of Spokane, is the contractor.

Johnson says the organization is in the process of securing the site along Mansfield. She says the 5-acre parcel next to the hotel—and a short distance from the CenterPlace Regional Events Center—is ideal because it will accommodate about 300 free parking spaces for guests attending different events occurring at the same time.

“At any time, we could have three events going on at once,” she says.

She says she hopes the Mirabeau Park neighborhood will be the heart of Spokane Valley, and guests can expect a Kendall Yards-type feel with the additional businesses and developments that are planned nearby.

Inside, as envisioned, the performing arts center will feature a main stage theater with more than 475 seats, as well as a 200-seat flexible studio theater, an acting conservatory, and an event and meeting space. The design show an expansive lobby with a grand staircase will lead guests to a second-floor overlook area. The third floor will have 10,000 square feet of special event space including a kitchen, bar, and terrace with views of Mt. Spokane.

Johnson says that building a new center from the ground up allows her to imagine the technology needs of future programs and include those elements in the design to enhance theater productions now. Designs call for a 70-foot-tall full flight system that will allow actors to fly over the audience, as well as a 4-square-foot hydraulic trap door system, a new sound system, and Ion lighting boards.

The Spokane Valley City Council has awarded over $6,000 to the Spokane Valley Summer Theatre to help update a public prospectus for donors for the new theater project, which had requested $20,000 from the council.

Johnson founded the Spokane Valley Summer Theatre in 2016, which has just completed its sixth season.

Johnson says the new center will allow the theater program to operate year-round once complete, which is the most important factor she considered for the project.

“This will be a legacy project for the region. It’s a once-in-a-lifetime opportunity to be a part of this,” Johnson says.