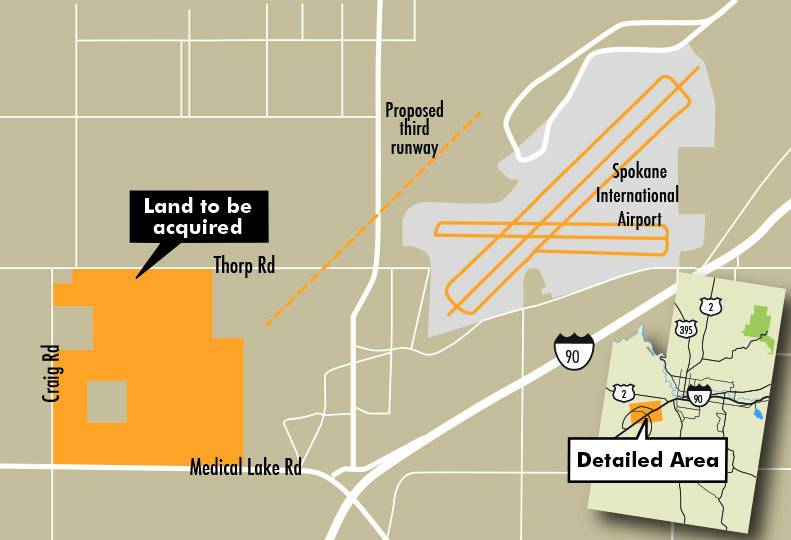 The Spokane Airport Board has agreed to acquire 844 acres of bare land west of Spokane International Airport for a possible expansion of an envisioned third runway, says airport spokesman Todd Woodard.

The cost for the land, located south of Thorpe Road and east of Craig Road, is about $2.4 million, Woodard says. The transaction, he says, should be completed by the end of the year.

The property will be set aside as part of the land bank for the future runway and associated safety areas, as well as a high noise exposure area.

While all the land for the initial 9,000-foot-long third runway already has been secured through purchases made in the 1980s and 1990s, Woodard says, this land parcel will allow the airport possibly to lengthen the runway to 11,000 feet to match existing taxiways.

The purchase, he says, is consistent with the airport's master plan and will enable the airport to control the land use in areas around the runway.

However, Woodard says, the master plan still is being reviewed by the FAA and likely won't complete the review process until next summer. Planning for the third runway is an ongoing process, he says, and the actual construction timetable for the runway will depend on growth in the number of flights the airport handles.

Some of the cost of the land potentially could be reimbursed by the Federal Aviation Administration's Airport Improvement Program, as some of the land has partial eligibility related to future safety areas, Woodard says.

The airport will be using general airport funds for the purchase. He says the land currently is owned by Louisa Mager, of Kirkland, Wash.