Amazon Again? Site work is underway on the West Plains

Early plans show facility will have about 700 employees 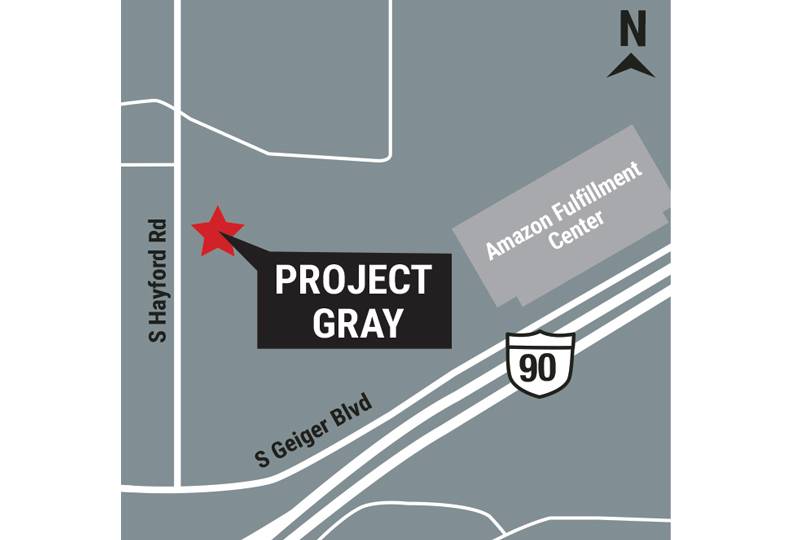 If the project is indeed to be an Amazon.com Inc. center, it will mark the sixth facility for the mega retailer in Spokane County.

A State Environmental Policy Act application for Project Gray shows that about 700 employees are expected to work at the completed site, with construction beginning this year and wrapping up in 2022.

The building permit application submitted by Columbus, Ohio-based Ford & Associates shows a construction value of $23.6 million for the structure, but public records didn’t show a total project cost. Ford’s website shows it designs commercial and industrial projects, with Amazon among its clients. Its Amazon projects include a sort facility, a call center, and a campus pickup store.

If Amazon is behind the Project Gray facility, the additional warehouse project likely would lead to Amazon.com Inc. being the fourth largest Spokane County employer, behind Fairchild Air Force Base, Providence Health Care, and the state of Washington. The company would have a projected 4,000 employees at six locations, including Project Gray, in Spokane County.

In addition to the original fulfillment center along Geiger, Amazon’s other regional operations include the recently announced Amazon Air cargo facility at Spokane International Airport; a last-mile delivery station at 11901 W. McFarlane Road, in Airway Heights; a Hub Locker+ at Playfair Commerce Park, in Spokane; and a fulfillment center at 18007 E. Garland, in Spokane Valley.

Earlier this year, Amazon withdrew plans for a last mile delivery station on the North Side at the Lowe’s Home Improvement site at 6902 N. Division.

The environmental checklist for the construction project also shows that the site will include 80 loading docks, 500 parking stalls, nearly 360 truck stalls, and utilities and stormwater facilities.

Preliminary architectural site plans show two guardhouses also planned at the facility. The primary guardhouse will be a 286-square-foot structure with a construction value of about $33,000.

Nearly 261,000 square feet of building space is planned for moderate-hazard storage, with the remaining 17,000 square feet to be used for other business purposes, according to permit documents.

Moderate-hazard storage is a classification of buildings that house flammable or combustible materials with the potential to develop or produce a fire at a moderate speed.

ALM Spokane LLC, a San Antonio, Texas-based holding of LM Logistics REIT II, bought the project site from West Plains Development LLC, of Spokane, for $7.2 million in early October, according to tax documents on file with the Washington state Department of Revenue.

While the building permit application for the main facility and security structures are under review as of earlier this week, the county has issued permits for commercial grading, fire-protection water service, and a rural approach to access the site.

Pierson performed some of the initial site work for the neighboring Amazon facility.

Environmental documents show that 592,000 cubic yards of material will be cut and filled as part of the grading work.

The report states that afternoon traffic to and from the new facility will be less than one-fifth of the trips generated by the neighboring Amazon Fulfillment Center.

The traffic study also describes the site as a cross-dock truck terminal. Cross-docking is the process of moving cargo from one truck directly to another, and cross-dock terminals usually are placed at distribution sites.