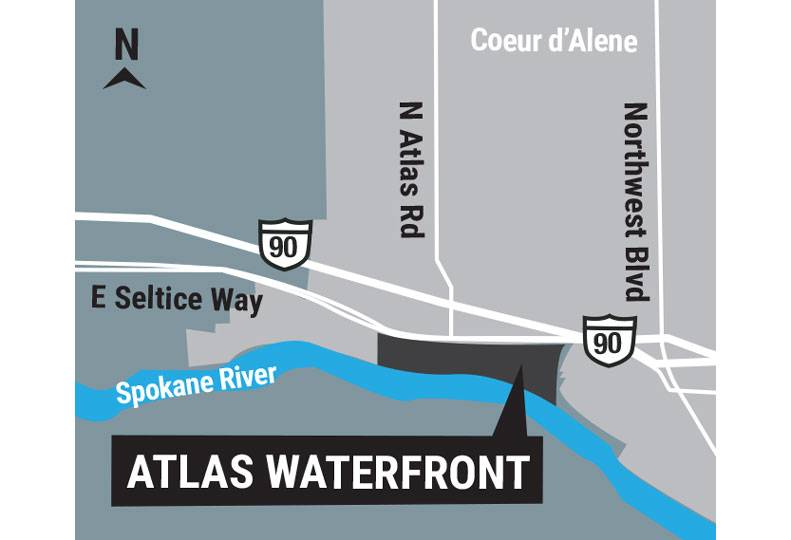 Redevelopment has started at the former Atlas Mill site, located along the Spokane River in northeast Coeur d’Alene.

Hilary Anderson, community planning director with the city of Coeur d’Alene, says the first phase of the development is scheduled to be underway in the first half of this year, with single-family, multifamily, and townhome construction planned.

The construction value of that first phase likely is more than $50 million, according to information compiled from the city’s financial feasibility report for the development, together with other project information provided by the city.

Boise, Idaho-based deChase Miksis Development plans to develop multifamily housing and mixed-use buildings on the western portion of the property. Bluegrass Development LLC, of Coeur d’Alene, in partnership with Atlas Building Group LLC and Aspen Homes, is planning single-family homes within that western portion as well, and ActiveWest Builders LLC, of Coeur d’Alene, is planning townhomes on the eastern-most part of the site, says Anderson.

Infrastructure for the projects, budgeted at $2.9 million, currently is under construction, she adds.

The overall plans for the development site will undergo some redesign, as the Coeur d’Alene City Council recently approved adding a 3.85-acre triangle portion of the property on the north side of the development.

The 47-acre site currently has 13 development plats, four of which are slated for use in the first phase.

Each participating developer has signed a development agreement with ignite cda, the city of Coeur d’Alene’s urban renewal agency, that will allow the city to transfer ownership upon issuing building permits or platting the properties.

No timeline is set for development of the entire site.

Although known as the Atlas Mill site, the lumber mill that had been located there was last operated by Stimson Lumber Co., which closed it in 2008.

The city of Coeur d’Alene purchased the site in May of 2018 for $7.85 million with the goal of developing it and preserving the waterfront property for public use.

The waterfront portion of the property has undergone shoreline restoration to protect water quality, Anderson says. Open space has been preserved along the waterfront for public access, with piers installed for public fishing or swimming. A dog park with water access also has been constructed, she adds. Accessible swim and kayak platforms also have been installed, she says, along with a park with playground features.

A public beach was also included, says Anderson. In total, public open space along the river is nearly a mile long, she notes.