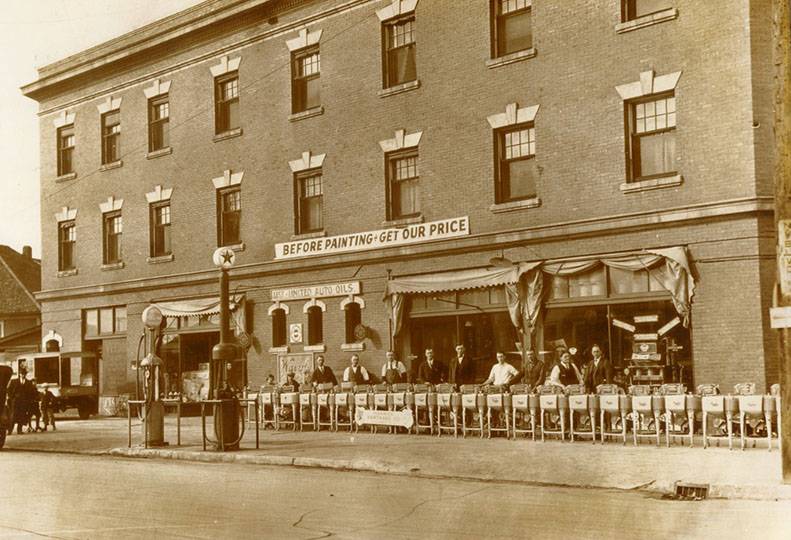 The store occupies 3,000-square-foot leased space in the triangle-shaped, two-story building at the corner of Northwest Boulevard and Monroe Street.

“The whole purpose is to assist people exiting a homeless situation and help them stabilize in a new housing situation,” Nicks says. “Most don’t have the resources to purchase furniture and other essential household items, like silverware.”

Nicks says that Furnishings for Hope, which currently has three employees and a few volunteers, will be selling both new and donated used furniture. The new furniture is purchased from distributors with funds donated to Catholic Charities, he says, and the donated items come through the furniture bank. Nicks says that the charity often receives furniture donations that it can’t use for the program.

“A lot of the time we get donations into the furniture bank that are really not relevant to the mission, such as antique, unique, or high-end pieces,” he says. “We didn’t really have a way to appropriately maximize those donations. Eventually we thought, why not sell those items and generate revenues to help with the operational costs at the furniture bank.”

Nicks says the store was created to be intertwined with the charitable program.

“We’re really trying to make this a financial engine for the furniture bank,” he says. “I really consider them to be sister programs.”

The Stewart’s True Value Hardware building has a long history in Spokane. Construction of the building began in 1909 and was completed in 1912.

The space leased by Catholic Charities has been vacant since early 2012, when the hardware store, then owned by Mike and Daun Czechowski, closed its doors. Czechowski took over ownership of the business in 1982 from his father, the late Theodore Czechowski.

Stewart’s was named for Irwin G. Stewart, who bought the building from former Washington governor C.D. Martin in 1946.

The building now is owned by Diane Kelly, who along with late husband Don purchased it from Irwin Stewart in 1984, their son Daren Kelly says. Catholic Charities is leasing the space for Furnishings for Hope from the Kellys.

Daren Kelly also says that 10 apartments on the upper floor of the building are being renovated. A few of the units have been completed and now are occupied, he says, and work is continuing on the rest. He says the renovation work includes updating kitchens and bathrooms and installing new hardwood floors.