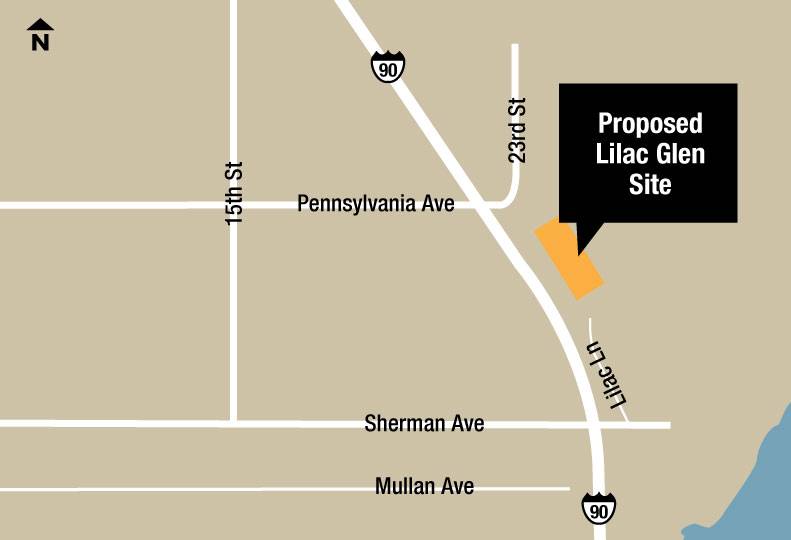 The Coeur d’Alene City Council has approved land-use requests for an envisioned 70-bed assisted-living facility and 20 other residential units on 13 acres of land near the French Gulch area on the east edge of the city, says architect Dick Stauffer, who represents the development owner Larry Fluet Revocable Trust, of Coeur d’Alene.

In a number of related actions, the Council approved a 3.5-acre annexation into the city from Kootenai County, as part of the development site. A portion of the annexation area is zoned to allow up to three residential units per acre, and a portion is zoned for eight units per acre.

The Council also approved a zone change for portions of two of the adjacent 9.5 acres of the development site, already inside the city limits, to eight and 17 residential units, respectively, per acre, while a portion of the site retains its three-units-per-acre zoning, says Stauffer, who is a principal at Miller Stauffer Architects PA, of Coeur d’Alene.

The council actions include approval of a special-use permit for an assisted-living facility on the section of the property zoned for 17 units per acre.

The development site is just east of Interstate 90, south of the junction of 23rd Street and Pennsylvania Avenue.

In addition to the envisioned assisted-living facility, the project site would include six single-family residential units and 14 duplex units, Stauffer says.

With the exception of three single-family residences on the north end of the development site, the site is largely vacant and undeveloped.

With the land-use approvals, the developer can “wrestle with what works financially and what goes together,” Stauffer says. “In order to even develop the idea, we had to get the entitlements.”

The developer hasn’t begun the building-permit process, he says, adding that it may take two years to get the project off the ground.

“There’s no design or schedule,” Stauffer says. “The developer has to construct the infrastructure.”

Infrastructure plans include improving water and sewer lines, which also would benefit the surrounding area, he says.

The project also would include improving and extending Lilac Lane, which currently connects to Sherman Avenue.

“Pennsylvania and Sherman avenues would be connected,” he says.

As part of the Lilac Lane extension, the developer would enhance the crossing at French Gulch Creek, he says.