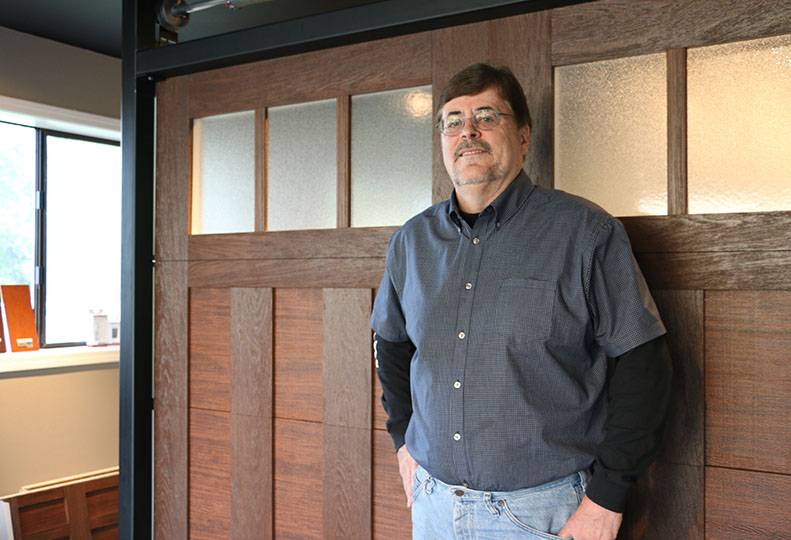 -—Katie Ross
Norm Morse, founder of Continental Door Co., of Spokane Valley, says that residences are the fastest-growing market segment for the 10-year-old company this year.

Spokane Valley overhead door dealer and installer Continental Door Co. is anticipating another strong year of sales, with revenues projected to be up 20 percent compared with 2013, says founder, co-owner, and President Norm Morse.

“We’re predicting another banner year based on our backlog of work,” he says.

Morse declines to disclose specific figures, but says that the company has had sales increases of between 15 percent and 20 percent every year for about the last five years.

“In the early years we were doubling,” he says. “In the last four to five years it’s leveled off at a sustained consistent rate.”

Continental Door, which opened in 2004, has 11 employees, Morse says, adding that it also works with subcontractors. The company owns two 6,250-square-foot buildings at its current site at 12718 E. Indiana, one of which is an office and the other a warehouse.

Morse’s sons, Marc and Derik, are also part of the business: Marc heads up the commercial division, while Derik leads residential sales and installations. The three are all co-owners of Continental Door.

The company’s strategic vision for growth is threefold, Morse says: continue to pick up new products, expand into North Idaho and Western Montana, and expand into the local service market.

That combination of new products and expansion has worked in the past, Morse says. During the economic downturn, Continental Door introduced a new product line and expanded into other parts of Washington as a way to continue its growth, Morse says.

“When the market slowed down, we could’ve sat on our laurels and taken a 10 percent to 15 percent hit, but we didn’t,” he says. “We figured we could sit and suffer, or we could find a new product to throw in the market or expand our market.”

The company introduced a new line of movable walls, Morse says, and began looking into the Seattle market.

“We saw an opportunity to build in Seattle,” Morse says. “Really what launched us into the Seattle market was the downturn locally … now, what we’re doing currently to continue to grow is along the same vein.”

The company is looking to expand more into Western Montana and North Idaho, and also to begin offering repair and replacement services here.

“We see more opportunity in service,” he says. “We recognize that is a large market. We can leverage our strength in commercial and residential to do service and replacement. This is a natural extension.”

Although Continental Door is selling its products in the Seattle area, it currently doesn’t have a physical presence on the West Side. Morse says he’s considering opening a satellite operation in North Idaho or Western Montana as part of the expansion there.

The company began as a “classic startup” in a basement, Morse says. Prior to launching Continental Door, Morse had a career in technology product design and development here for over 20 years, mostly at Spokane-based Key Tronic Corp. Morse says he worked on technology that involved fingerprint scanning and ergonomic keyboard design, among other projects, for clients such as Cupertino, Calif.-based Apple Inc., Armonk., N.Y.-based IBM Corp., and Palo Alto, Calif.-based Hewlett-Packard Co.

Morse had retired from the technology industry before he got the opportunity to partner with Lynwood-based door company Crowe Building Specialties Inc. to open a Spokane location in 2000.

“I told (the owner) that within three years, I wanted to buy him out,” Morse says. He then changed the name and formed Continental Door.

Morse says the business focuses a lot on strategic marketing, something he learned about while working in the technology industry.

“I use a lot of my high-tech sales and marketing skills in this business,” he says.

The two large product brands the company supplies are made by Cincinnati, Ohio-based Clopay Garage Doors and Mountaintop, Penn.-based Cornell Iron Works, Morse says. Continental Door has won the President’s Award from both companies in 2012 and 2013, Morse says. The awards represent both sales growth and overall sales, he says.

“If the fire alarms go off, the doors shoot out to contain the fire,” Morse says.

Clopay, meanwhile, manufactures garage and sectional overhead doors, which are installed mostly on residences or on structures such as fire stations that need large rolling doors. Morse claims that Continental Door is the largest distributor of Cornell and Clopay doors in the western U.S.

As an example of a larger project, Continental Door installed the large overhead doors on the Spokane International Airport’s Airport Rescue and Firefighting Facility, which began construction last year and is slated for completion by the end of 2014. It also put in the doors for the airport snow removal equipment building constructed two years ago, Morse says.

Beyond large bay doors and commercial countertop coiling doors, Morse says the company has a niche in supplying and installing security gates for underground parking structures.

“Cornell lends itself well to underground parking, specifically the security gates,” he says.

The company currently is supplying and installing the underground parking gates at a new Marriott hotel in Bellevue, Wash., Morse says.

Morse says the company benefited from government-funded infrastructure projects during the economic downturn, which has helped it continue its revenue growth. In particular, he says the company did a lot of door installations at wastewater treatment plants.

“Each (plant) has a lot of overhead coiling doors,” he says. “We’ve done all the Spokane County wastewater treatment plants.”

He says that the residential division is the fastest-growing division of Continental Door’s sales. The company started out as a commercial operation, but the residential side has grown to be about 30 percent of its business, he says. Morse says he expects that residential sales will continue to grow.

“The residential market here has been strong,” he says. “We generally follow the market. The North Idaho homebuilding market is on fire.”

Apartments, in particular, seem to be on the rise, Morse says.

“Apartments and multifamily units are probably at record levels,” he asserts.

“We’ve ranged out with (Inland) as far as Billings, Mont.,” he says.

In the pipeline for Continental Door are a number of residential projects, Morse says.

“We’ve got 40 to 50 residential projects that are going to turn in three to four weeks,” he says.

On the commercial side, the company usually has about $1 million worth of work that’s been awarded, but that hasn’t started yet.

“Commercial has a lot longer timeline,” Morse says. “The doors usually come towards the end (of the project).”

The company’s upcoming commercial projects include overhead doors for a Confederated Tribes of the Colville Indians casino in Omak, Wash., as well as the long-planned retirement community apartment tower called The Summit, which will be located on Rockwood Retirement Communities’ South Hill campus.

Morse says that the company is constantly looking for opportunities to expand its reach.

“We take advantage of every opportunity,” he says.