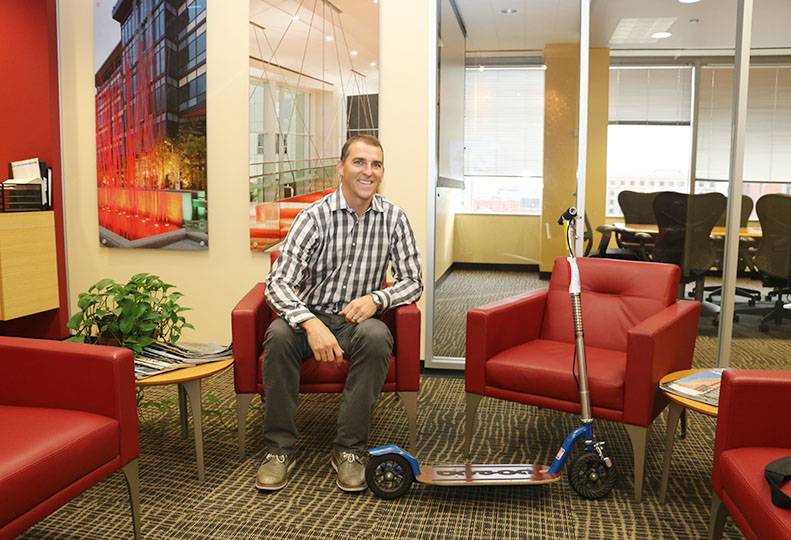 -—Judith Spitzer
Craig Crowley, a DCI Engineers principal, says employees use scooters to get around the company’s downtown Spokane office.

Working on projects such as the Spokane Convention Center expansion and the Grand Hotel Spokane, Seattle-based DCI Engineers will bring in revenue this year of $27 million companywide, and the company is poised to see 10 to 15 percent in growth in 2015, says Mark Aden, DCI president.

Aden, who opened the Spokane office in 1998 and is based here, says the company now employs 200, including about 45 employees here, at 601 W. Riverside in the Bank of America Financial Center. DCI occupies the entire sixth floor, or about 15,000 square feet, of that building. It also maintains three offices in California, and one each in Portland, Anchorage, and Austin, but Aden says the Spokane office is the company’s second largest after Seattle.

DCI provides structural and civil engineering on projects both large and small, including an impressive list of work in the Inland Northwest, such as the Davenport Hotel renovation, the Joel E. Ferris High School expansion, and McEuen Park in downtown Coeur d’Alene.

Aden says he and several partners executed an agreement buying out existing shareholders of the company just before the recession in the fall of 2007, when he took over as company president.  “Then a year later, we got totally clobbered by the recession like everyone else in the business.”

The company posted $24 million in total revenue in 2008 and DCI staff totaled about 175 companywide, he says. At one point during the recession, that staffing level was down to about 115. “So 30 percent of our workforce was laid off,” he says.

In the midst of the Great Recession in 2009, the company saw a 40 percent drop in revenue, the first time it had experienced a decrease since it was founded in 1988, he says.

“It was the first time revenue had dropped; at that point we had basically grown for 15 years,” says Aden. “It wasn’t an unusual thing among our partners, friends, and clients to experience that. It was brutal for all of us involved in architecture and design.”

Since the recession, DCI has opened new offices in Anchorage, San Francisco, and Irvine, Calif.

Today, he says, business is good and success is due in part to DCI principals believing in the company.

“It was not an easy time for anyone in our business. But we believed we were a great company and stuck together and believed we would recover, and we have. We started growing again as the economy has grown,” he says.

In addition to the Convention Center and Grand Hotel Spokane projects, DCI currently is working on Rockwood Retirement Communities’ $41 million, 11-story tower on the South Hill that will include 65 luxury apartments for seniors, says Craig Crowley, DCI principal.

DCI has handled several projects at Gonzaga University, including the structural design for the McCarthey Athletic Center. The company also has worked on several other sports facilities projects, student housing projects, and several other buildings, most of which were newly constructed, he says.

DCI also worked on Gonzaga’s Paccar Center for Applied Science. The Paccar Center was designed as a demonstration site for engineering principles that promote energy conservation and sustainability in design and construction.

With DCI’s eight offices around the country, employees can live where they choose, Crowley says, which goes along with what he calls the company’s macro-management style.

“If the right employee with the right goals is hired, how they reach those goals is left up to them,” he says. “Taking care of clients and team members is our No. 1 priority.”

DCI employees can work from home, on the road, and in other settings, because a cloud-based business environment enables people to be more mobile, he says. In addition, the company offers its employees a chance to work out of any of its offices for one week out of the year, with a stipend, to interact with other employees and to experience different locations.

“It provides incentive for people, and it’s easy enough to do,” he says.

Aden and Crowley both say the Spokane Convention Center project has been one of the most challenging projects DCI has ever worked on. “The site was so constrained and the geometry so complex,” Aden says.

The 90,000-square-foot expansion of the convention center will provide additional meeting and ballroom space as well as lobbies with views of the river.

Crowley says design challenges included marrying new building design with the existing structure and providing a seamless flow in the wide open building. “It was very complex to add on with this structural clear span with trusses that had to span the entire space,” he says.

A custom truss in the exhibition hall is two stories tall, and carries the exhibition hall roof, floor and outdoor plaza, according to BCI’s website. A special permitting process for erosion control also was required because of onsite contamination and proximity to the Spokane River.

Aden says he thinks the city is going to be excited by what is happening.

“What’s happening at that end of town and the amount of traffic that will generate … I don’t think most people understand what a surge that’s going to create for the economy here. We’re seeing it happen already with the Huppins block and the Globe building. People are buying up property so we’re pretty excited about what’s happening,” Aden says.

Crowley says overall, he enjoys the diversity offered by the different projects.

“What’s fun is that each process is different for each client and the goals are different. Sometimes the priority is how fast and cost efficient we can do the project, and with others it’s delivering on the vision,” he says.

Other renovations include the Spokane & Inland Empire Railroad Building (SIERR) at McKinstry Station, built in 1907, which was formerly a repair depot for Spokane’s first electric railway system. The building was converted into McKinstry’s Northwest headquarters, and DCI provided civil and structural design services for the 68,000-square-foot adaptive reuse project.

“It was a very cool renovation,” Crowley says. “It was built in 1900 on a great site, but it needed a lot of work. The roof was half collapsing, and there were a lot of environmental issues.”

Crowley says mezzanines, decks and an elevator core were added to the interior, and the original profile of the building was kept intact when possible.

The building has won numerous awards, including a state award in 2012 for achievement in historic preservation.

DCI Engineers work on residential projects as well, which further diversifies the type of work the company takes on.

“It’s fun to do custom homes that are smaller than commercial projects, but challenging because each one is unique and each owner is unique,” he says. “Each residential owner has different tastes, styles, and family functions. They have different priorities. Some want the biggest kitchen ever or the biggest closets, or sometimes they just don’t know what they want.”

DCI has done projects in about 45 states. Aden says it recently won several large mixed-use projects, both over 1 million square feet, in San Francisco and Los Angeles, as well as a 50-story tower in Austin, Aden says.

He says when DCI moved to Spokane, he and his partners were confident Spokane was a good market.

“We wanted to invest in the future of Spokane,” he says. “When I look back 16 years, I had a desk and a chair I bought at Home Depot, and we were in the Paulsen building then. We are delighted to have become a part of Spokane and have contributed to its success.”