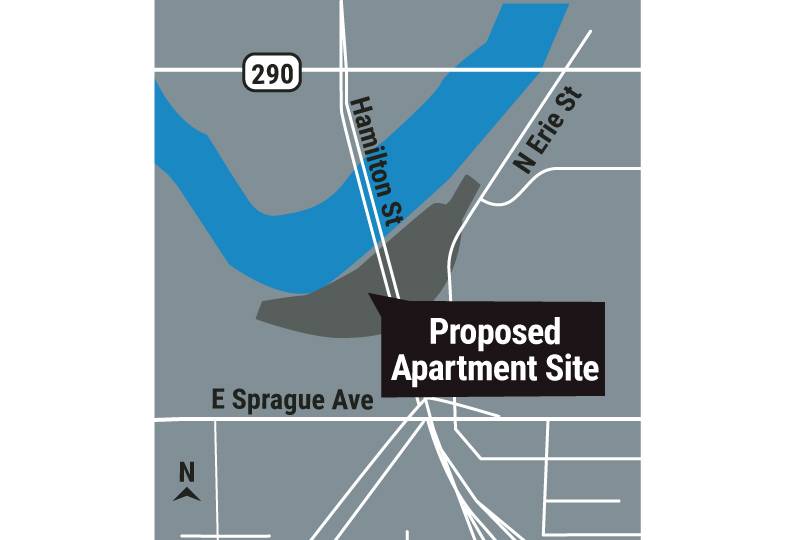 Rustin Hall, principal at Spokane-based ALSC Architects PS, the architect of the project, says the 126-000-square foot project will occupy land on the southern edge of the Spokane River near the Hamilton Street bridge overpass.

A representative of Sagamore Capital couldn’t be reached immediately for comment.

Seattle-based DCI Engineers, which has an office in Spokane, is providing engineering services for the project.

The two, four-story buildings will flank the Hamilton Bridge, while a park will be built below the bridge itself, Hall says.

The project is part of a 20-year binding site plan established roughly 20 years ago, Hall says, which is why it’s allowed to be within 50 feet of the ordinary high-water mark.

A relatively small portion of the riverbank along the designated development area has a 1% chance of flooding annually, according to a city flood hazard map.

The Washington state Department of Ecology defines an ordinary high-water mark as a biological vegetation mark along the shore to which the water level rises at its highest.

Hall notes that the 50-foot gap between the riverbank and the development will be used to maintain the Ben Burr Trail, which site plans indicate will be widened to allow for fire department access on the north side of the proposed buildings.

The mile-long Ben Burr Trail ran from Underhill Park to Liberty Park when it was first established. In 2016, the city of Spokane funded a $1.2 million expansion of the trail, adding more than a mile and connecting the existing trail to the Centennial Trail where it meets the Gonzaga Bridge to Erie Street, and adding trail immediately south of Underhill Park.

The buildings will have a mix of 44 studio, 60 one-bedroom, and 28 two-bedroom apartments, for a total of 132; however, building plans note that six units will be dedicated to amenity space.

Included amenities will be a fitness center and a clubhouse, Hall says.

A portion of the vacant 9.6-acre property is owned by Brown Properties LLC, of Spokane, and a portion is owned by an affiliate, River Bend Property Owners Association, also of Spokane, according to the Spokane County Assessor’s records.

The development will occupy 111 to 229 N. Erie, on the south side of the Spokane River, across from Seattle-based McKinstry Co.’s Spokane office.

The site will be accessed via the recently constructed extension of Martin Luther King Jr. Way.

In total, 196 parking stalls are planned for the space, eight of which will be Americans with Disabilities Act compliant.

In addition to parking and a new park under the bridge, other site improvements include landscaping around the buildings, according to site plans.

Construction is expected to start in April of 2020, says Hall. A completion date hasn’t been determined yet, he says, adding, the developer is considering phasing the project to have a portion of it available by 2021.

The project is still in the early design phase, and no contractor has been selected yet, Hall says.