Homebuyers can save by buying foreclosed houses 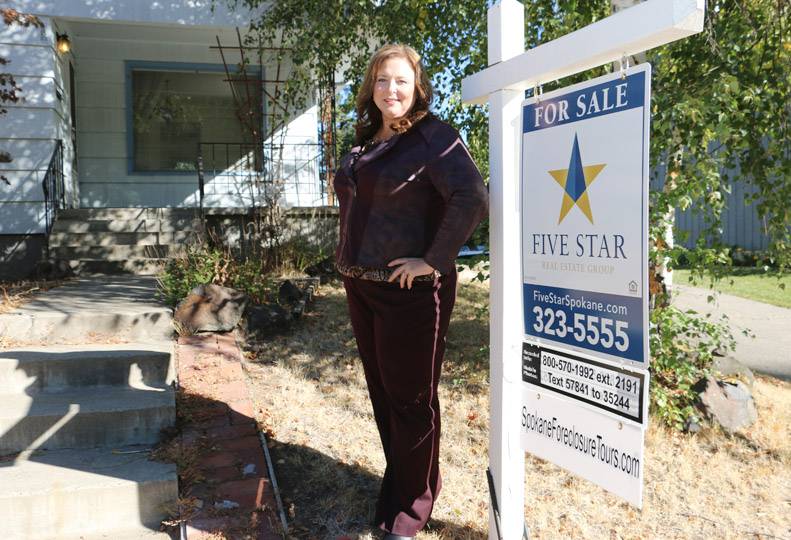 In 2010, the Five Star Group kicked off a series of monthly tours of homes that are in foreclosure. The tours are free to prospective buyers, who also learn how to maneuver the system when buying a foreclosure, and are able to talk to a lender who accompanies Carrigan on the tours.

Carrigan says the majority of homes on the tour list are not her listings, but she represents foreclosed home sellers, which include a number of different area lenders who have assumed ownership of the properties after borrowers have defaulted on their loans. Six other sales agents in the group represent buyers.

Carrigan says she and Nicolson have learned what red flags to watch out for and what to expect in the process of purchasing a foreclosed property and want to pass the information along to the public.  Six to 10 people typically turn out for the tours, although Carrigan says as many as 30 buyers have signed up. She says they often see first-time home buyers as well as investors who are looking for property to flip and sell.

The two brokers have sold foreclosed properties in the Spokane, Spokane Valley, and Liberty Lake areas involving lenders such as Bank of America, the Department of Veteran’s Affairs, Chase Mortgage, Carrington Mortgage Service LLC, and NationStar Mortgage, she says

“We pick out five or six of the best deals in a certain area like Spokane Valley or the South Hill and then let everyone signed up know where the first house is located. Then we do a caravan to all the rest of the houses,” Carrigan says.

In Spokane, at any given time, 200 to 300 properties in foreclosure are listed for sale, she says.

The Spokane County Auditor’s Office lists 1,030 properties in foreclosure so far this year. Last year, the office listed 1,211 completed foreclosures, compared with only 685 in 2012 when the housing market began to improve after the Great Recession,

According to the website RealtyTrac, a real estate information company and online marketplace for foreclosed and defaulted properties across the country, the median sales price of a nondistressed home in Spokane County was $172,000, while the median sales price of a foreclosure home was $111,000, or 35 percent lower. In August, according to the website, the number of properties in the county that were being threatened with foreclosure was 34 percent lower than in the previous month and 30 percent lower than August of last year. Of all active foreclosure filings in August 2014, 16 percent were in pre-foreclosure proceedings, nearly 58 percent were up for auction, and about 26 percent were bank owned, according to RealtyTrac.

The properties here in foreclosure typically range in price from $40,000 to about $200,000, Carrigan says, although she says she has seen houses at much higher price points, including one that was priced at $1.5 million.

A lot of the properties need work. Often, they have peeling paint, water damage, holes in the walls, and carpet needing replaced, she says.

“The most common thing is broken pipes from the houses sitting over the winter unoccupied,” she says. “And there is a lot of deferred maintenance because people couldn’t afford to keep up with house repairs.”

While many of the houses are in need of repair or maintenance, she estimates 30 percent of them don’t need any work done.

“Many of them are move-in ready,” Carrigan says.

She says prospective buyers might choose a foreclosure because they want to buy something inexpensive and to build equity into the house by doing any needed work on it themselves, while others only want to do cosmetic work.

“And some people just hire someone to do any work,” she says.

Spokane homebuyers looking for a great deal can save up to 30 percent under real estate market values if they are ready to take on a foreclosed property, says Carrigan.

Many of the foreclosed homes have gone back to the lender because people couldn’t pay their mortgages during the heyday of the real estate market, she says.

“Anyone could get a loan but lots of people couldn’t pay for it,” she says.

Carrigan says people whose homes are in foreclosure may have relocated to another area, or have lost jobs, and still others have tried to sell the property without success. “And a surprising number of foreclosures are from drug use,” she contends.

Most of the properties are listed on the Multiple Listing Service, the service used by the real estate industry to list properties, although Carrigan says the Keller Williams group does show some properties before they come out on the MLS if listed with her company.

Typically people have many of the same questions any other homebuyer would have, Carrigan says.

“People usually want to know about financing, how much of a down payment they need, and questions about monthly payments,” she says.

For homebuyers who plan to be owner-occupants, a down payment of 3.5 percent to 5 percent of the purchase price usually is required and the down payment usually is about 20 percent for investors, although there are exceptions, she says. A lender who can answer specific questions usually goes on the tour with Carrigan and Nicolson and can even prequalify people for financing during the tour, she says.

Carrigan says that rehab loans also are available and can be built into financing loan packages by the banks.

“People are often not aware that they can do that,” she says.

Information about the foreclosure tours is available online at spokaneforeclosuretours.com. The next tour is scheduled for Oct. 25.