Popular in larger metro areas, Well design accreditation gets some traction in Spokane 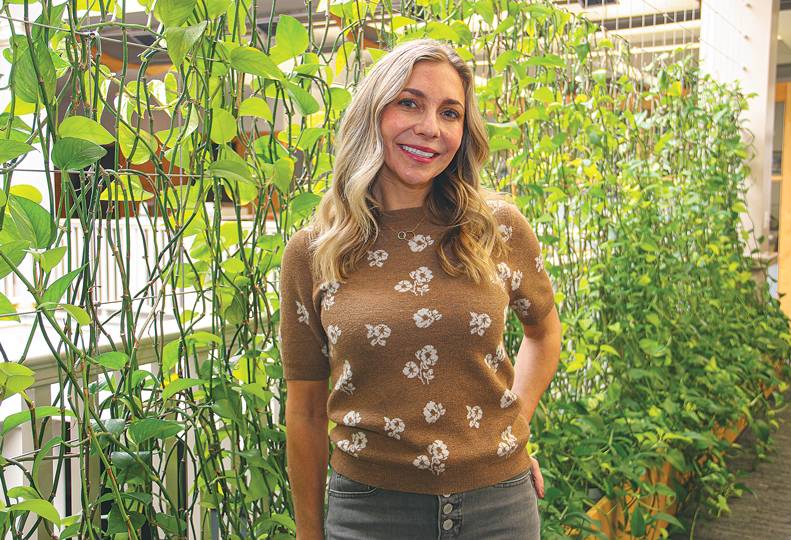 -Virginia Thomas
ALSC Architects PS associate Robin Pecka is one of two professionals in the Spokane area to attain the relatively new designation.

A relatively young design certification that aims to improve the effects of a commercial environment on a building's occupants is gaining traction in the Inland Northwest.

The Well building standard was created in 2014 by Paul Scialla, developer and former partner at New York-based financial services company Goldman Sachs. Certification in the standard is provided by the International Well Building Institute, which Scialla's company, Delos Living LLC, established in 2013.

Robin Pecka, associate at Spokane-based ALSC Architects PS, has earned a relatively new building standard certification that focuses on the health and well-being of a commercial building's occupants.

Pecka, who has been in the interior design field for more than 16 years, became a Well-accredited professional on July 31. The certification is intended to signify that Pecka is able to assist a building's owner and its design team in obtaining Well standards certification.

Yan Tai, senior vice president of public relations and communications for the International Well Building Institute, says 213 people in Washington either are credentialed Well accredited professionals or who are waiting to take the credentialing exam.

Of those, two are from Spokane. However, Tai declines to name them.

While there only are two Well accredited professionals here, Pecka says, "It has more traction in the bigger cities, like Portland and Seattle, but I think it will start to make its way here.”

She says she was excited when she discovered the standard shortly after it debuted, as she had already been working to incorporate many concepts present in the Well standard within her own work.

"I zeroed in on it because I've always had this deep-rooted necessity to create spaces that tie psychology and interior design together," she says. "When I saw the Well building standard, I thought, that's what I want, that's the step-by-step of what I've been trying to do."

The standard was developed over the course of about seven years, Pecka says, during which time doctors, architects, and scientists came together to research connections between the buildings in which people spend their time and the impacts those environments have on human health and well-being.

"It's about creating a more enriched engagement between a person and their built environment," Pecka says. "The goal is to create spaces that incentivize people to continue feeding their health and well-being."

Ten components, called concepts, are within the standard. Within each concept are preconditions and optimizations, Pecka says. In order to receive certification, a building must meet all preconditions for all 10 concepts. The concepts provide guidelines for designers and building owners to follow in order to certify as adhering to Well building standards.

"Alongside all preconditions being met, projects can pursue which optimizations, if any, they would like to focus on within each concept," she says.

When focusing on the nutrition concept, the Well guidelines focus on ways in which building owners can provide healthy food options, Pecka says.

"If you have a breakroom or a vending machine, a certain percent of the snacks must have under a certain amount of sugar," Pecka says. "You can create a garden or greenhouse 100 feet or less from the site, so you can start to grow your own food."

Pecka says she believes Well is likely to develop into a standard as ubiquitous in the design industry as Leadership in Energy and Environmental Design standards have become over the past 30 years.

"People are becoming more and more in tune to the fact that …. we need to be more considerate of the people that we're designing for," Pecka says. "I think it will become more known not only because it's great to do for the building's users, but also as a business owner, the incentives that it provides could really help with employee retention programs."

Registering for the exam to become a Well-accredited professional currently costs $300, or $99 for students.

"I have two young kids, so the process took me longer than I thought. It was a little bit of a balancing act," she says.

Unlike the LEED standard, in which designers only need to certify once, Well accredited professionals must recertify every three years.

The Well building standard continues to evolve, and it's important for designers to keep up with changes, Pecka says.

Buildings that receive Well certification are regularly tested to ensure some aspects remain up to standard, she says. Those aspects include water and air quality, as well as lighting and acoustics.

According to the International Well Building Institute website, each project seeking certification pays a flat enrollment fee, a certification fee based on the square footage of the space, and a performance testing fee. In total, certification can cost between $15,500 and $107,000.

Pecka says many of those elements have been a concern in previous projects ALSC has produced.

"We try to implement those design concepts of the framework of Well building into our projects, because it's just creating a good design for people," Pecka says.

"Because I'm the first one in our office to get Well certified, I'm taking the framework pieces as I learn, and I'm starting to implement those into how I'm designing the space," Pecka says.

Some previous projects ALSC has been involved in that Pecka says incorporate Well concepts include the Doris Morrison Learning Center, in Spokane Valley; the Riverstone Transit Center, in Coeur d'Alene; and the Walla Walla Community College Science and Technology Building, in Walla Walla.