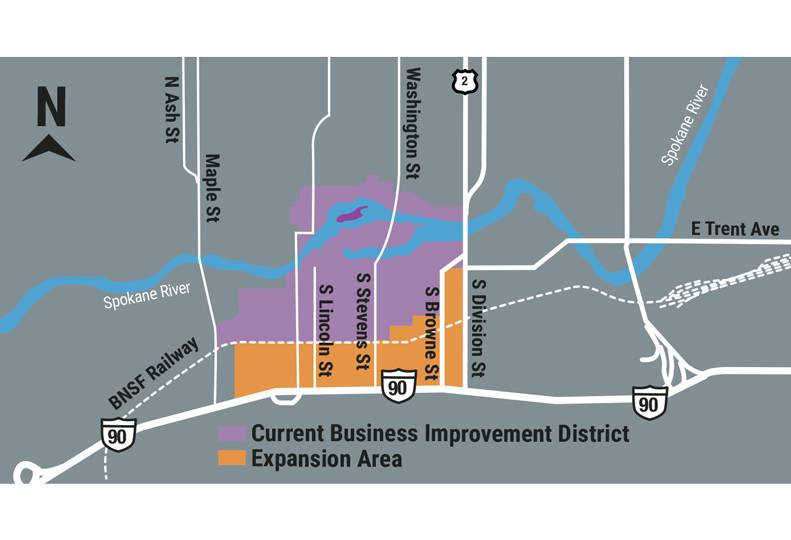 The Downtown Spokane Partnership and the Spokane City Council have agreed to a five-year contract extension for the DSP’s management of the downtown Business Improvement District, says Roy Koegen, DSP chairman.

Under the new contract, DSP will work with the Council to expand the Business Improvement District the DSP serves. In terms of geographic area, the expansion will increase the size of the district by 20%, estimates Koegen, a partner in the Spokane office of Kutak Rock LLP law firm.

Currently, the BID boundaries include businesses around Riverfront Park with the northern border running along west Cataldo Avenue, the southern border tracing the railroad viaduct, and eastern and western borders running along Division Street and Walnut Street, respectively.

Koegen says it’s up to the City Council to take legislative action to expand the BID, a process that will happen in three phases.

DSP, a nonprofit that advocates for the district, began negotiations to renew its contract as BID operator seven months ago.

The organization initially faced financial concerns surrounding the startup costs of cleaning each of four zones within the proposed expansion area and raising them to safer standards, the Journal reported earlier.

As currently envisioned, DSP will take on the responsibility of clean-up south of the railroad viaduct in the city’s core by expanding the border from along the BNSF Railway Co. line to Fourth Avenue. The western boundaries will be dictated by the DSP’s financial analysis and statutory requirements to remain within maximum annual expansion of 10% of existing valuation, with the intent of going as far west as allowed, up to one parcel or block west of Ash Street, says Koegen. On the eastern side of the district, the border will extend just east of Division Street.

The current annual operating budget for maintenance of the BID is $1.5 million, says Koegen. Under terms of the BID, business owners in the district pay a self-imposed tax, which is the main source of revenue that funds the ongoing beautification and safety efforts. The fee is based on the assessed value of the real estate within the district. DSP, contributes 17% in overhead costs, which the organization raises through membership dues, Koegen adds.

To reduce the financial impact of initial startup costs to expand the district, the City Council agreed on Sept. 27 to provide $250,000 one-time payments in three of the four proposed expansion areas, bringing the total to $750,000, says Koegen.

The funding will enable DSP to bring the expansion areas up to standards, while the BID ratepayers’ annual assessment will help to maintain the standards, he adds.

“I think it’s one of the most important projects and matters the City Council in partnership with (DSP) can undertake,” says Koegen.

The fourth zone is small enough for DSP to manage startup costs, adds Koegen. That zone will have east and west boundaries just east of Division and at the current district boundary at Browne Street, respectively, and will be north of the railroad viaduct and south of Spokane Falls Boulevard.

Currently, DSP employs eight Security Ambassadors and seven Clean Team members. The organization plans to add one member to each group with the new contract, Koegen says. Additionally, DSP will secure a vehicle to assist in the coverage area. Ambassadors patrol the sidewalks within the district in pairs, approaching issues like altercations and working to diffuse problems. They additionally serve as guides for tourists visiting the community, providing directions and recommendations.

Koegen says that as the expansion areas are cleaned up and deemed safe, they’re expected to attract business development.

“We’re hoping to make it a diverse area and attract businesses that reflect the diversity of our community.” he says.