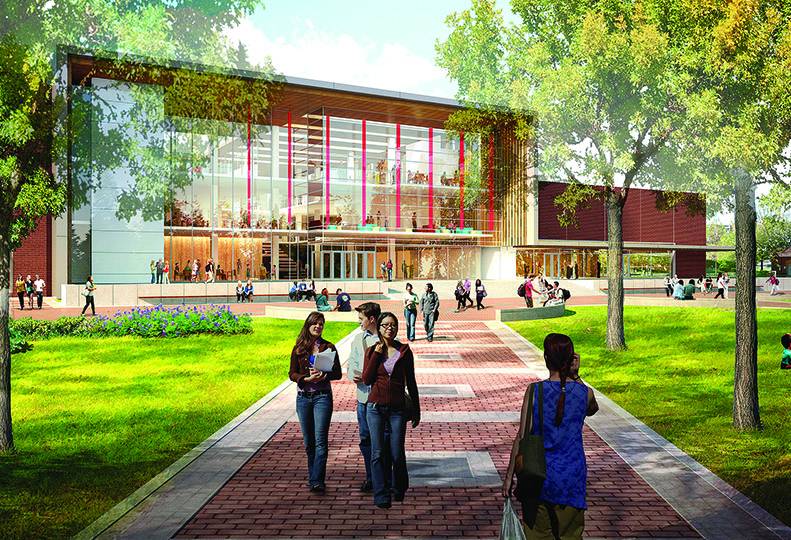 -—Perkins+Will
Eastern Washington University has proposed a $35 million upgrade to the Pence Union Building on the school’s main campus in Cheney. Students have endorsed the project, and the school’s board of trustees will review it later this month. 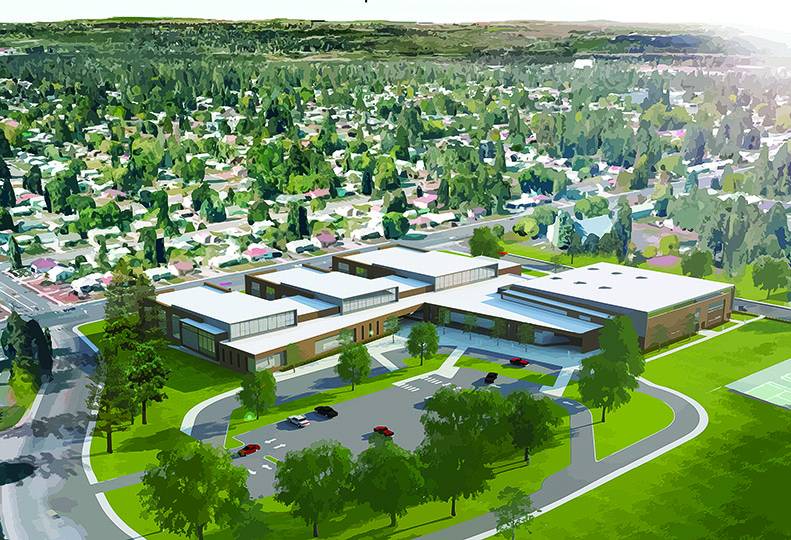 -—NAC|Architecture
The $36.6 million project to replace Salk Middle School is expected to be one of the first financed through the recently approved bond measure. 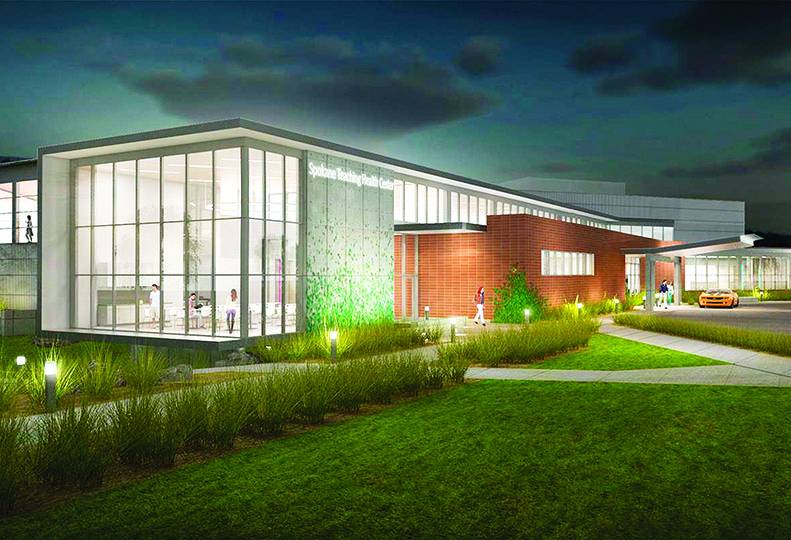 Construction in the education sector is poised to ramp up here, with the recent passage of bond measures in several Spokane-area school districts and capital projects under way or planned for area colleges and universities. The capital projects either planned or already under way exceed $850 million in estimated value.

Spokane School District 81 has at least 10 projects either planned or already under way, says Greg Brown, the district’s director of capital improvements.

Salk, located at 6411 N. Alberta, is expected to be one of the first projects to be constructed during the next six years. A new gym has been constructed at Salk and master planning work there has been performed with funds from a 2009 bond measure.

The $36.6 million Salk project will include construction of a 97,000-square-foot, two-story classroom and administrative building adjacent to the current structure, which will be demolished. The building will be erected along Francis Avenue on the south part of the campus.

Already under way and expected to be finished this year is a $13.7 million addition to the NewTech Skills Center, at 4141 N. Regal. That project started in April, with Spokane-based Graham Construction & Management as general contractor-construction manager. The two-level, 38,000-square-foot addition is scheduled to open this August.

Bernardo|Wills Architects PC, of Spokane, designed the NewTech addition, which is the first of two construction phases that the school district envisions for the center.

Also under way is a renovation and expansion at Mullan Road Elementary School, at 2616 E. 63rd, which is expected to be finished by August 2015. Workers are constructing about 17,000 square feet of new space as well as renovating an addition constructed in 1981 that has more than 40,000 square feet of space. WLK Joint Ventures, a Spokane-based partnership of Walker Construction Inc. and Leone & Keeble Inc., is the general contractor and construction manager for that project. Spokane-based ALSC Architects is the architect on the project.

At Hutton Elementary School, located at 908 E. 24th, Spokane-based Garco Construction is working on a renovation and expansion project that started in June 2014. The $28.8 million project involves demolishing some portions of the structure, modernizing the original 1931 Spanish-style building, and erecting new classroom wings.

Madsen Mitchell Evenson & Conrad, of Spokane, is the architect on that project, which is expected to be completed this summer.

The largest high school project for Spokane Public Schools will include construction of a $14 million cafeteria and commons addition at North Central High School, at 1600 N. Howard, north of downtown. Graham Construction & Management recently was named the general contractor on the project, and NAC|Architecture is the architect. Construction is expected to begin in in the summer 2016 and to be completed in the fall of 2018.

The proposed cafeteria and commons building will provide a link between the older and newer parts of the school complex. The structure also will provide space to serve all North Central students in two lunch periods, which means the high school will have a closed campus during the day.

A $25.7 million renovation and modernization project at Franklin Elementary, at 2627 E. 17th on Spokane’s South Hill, is planned to start in in the spring of 2017 and to be completed in late 2019. The current school building, constructed in 1909, will be updated, and all portable classrooms will be replaced with a 17,000-square-foot addition, to bring the school up to the district’s new standard elementary school size of 65,000 square feet.

A $22.4 million project to replace Linwood Elementary, at 906 W. Weile in northwest Spokane, is planned to get under way in the spring of 2019. The new school is expected to be completed by the spring of 2020. The school will be replaced with a 65,000-square-foot structure, and the current school will be demolished.

Other elementary school project funding under the 2015 bond includes $5 million for upgrades at Adams Elementary and $4.5 million for a classroom addition at Wilson Elementary, both on the South Hill.

An elevator will be added to Adams Elementary, at 2909 E. 37th, which is a three-story building and other work will include replacing windows and heating and ventilation equipment. The project is expected to start in 2019 and to be completed by the summer of 2020.

At Wilson Elementary, at 911 W. 25th, the construction of a two-story, six-classroom addition is slated to begin in the spring of 2018 and to be finished by the summer of 2019.

Another project will involve classroom additions to Lewis & Clark High School on the lower South Hill, with that work budgeted at $4.5 million. That work is expected to start in the spring of 2018 and to be completed in the summer of 2019. Although it hasn’t been determined where on campus the additional classrooms will be added, Brown says the addition will enable the school to convert some existing classrooms into needed science labs.

The district has allocated another $33 million to fund smaller projects districtwide such as roofing and carpet replacement.

Meantime, in the Cheney School District, voters approved a $69.5 construction bond, and with state matching funds, the district expects to have more than $100 million in funding for several major projects, including the renovation and expansion of Cheney High School.

The project calls for 12 new classrooms, a performing arts facility, physical education space, and a practice gym, as well as expansion of the cafeteria, which will double as a commons area to accommodate student gatherings. The school’s current theater will be converted to science labs. Spokane-based NAC|Architecture is doing preliminary design work for the project.

Spokane-area contractors and designers also are involved in other higher education construction for Eastern Washington University, the Spokane campus of Washington State University, Community Colleges of Spokane, and Whitworth University.

At EWU’s Cheney campus, several major projects are either in the planning stages or ready for design work, including a $35 million student union building upgrade. EWU has hired Perkins+Will, a large international design firm, to provide architectural/engineering pre-design services for the renovation and upgrade of the Pence Union Building.

The project will focus on improving student and visitor ease of access, says Troy Bester, EWU senior project manager for facilities. Bester says students endorsed the project and now it goes to the EWU board of trustees for a discussion and vote on March 20.

The project will involve a major remodel of the 40-year-old, 120,000-square-foot PUB and will add 4,000 square feet of space to the building.

“It is a major renovation with some exterior modifications and major interior remodel,” says Bester. “All of the mechanical and electrical infrastructure will be updated as well.”

Early concepts envision a multistory, 100,000-square-foot building that would include labs, offices, classes and support space. EWU has sought legislative funding for design of the building, and if approved, the university has said it will request construction funding in the 2015-2017 capital budget.

The Spokane office of Great Falls, Mont.-based Thomas Dean & Hoskins Inc. is the consultant for the water distribution system upgrades, which will include refurbishing as well as realigning piping, and replacing various water connections and fire hydrants.

Crews also will construct a disinfection-and-monitoring building at the base of a 1.1-million gallon storage tower. The work is expected to be finished by July 2016.

Bouten Construction Co., of Spokane, is the contractor on that project and NAC|Architecture is designing the building. The building will be situated on the southeast edge of the Spokane campus at the former site of a Peirone Produce Co. warehouse.

WSU Spokane also plans this spring to construct a temporary parking lot at a site where four structures recently were demolished at the northeast corner of Spokane Falls Boulevard and Pine Street. It is the first step toward future development of the property, says Rusty Prichard, capital planning director at WSU Spokane.

Following the opening of its $79 million Pharmaceutical and Biomedical Sciences Building on the Riverpoint Campus east of downtown late last year, WSU Spokane has started its next master-plan update.

The focus of the master plan will be on WSU’s mission in terms of health sciences and academic growth for the next 10 years.

The team of Bernardo|Wills, the Spokane office of Seattle-based BNBuilders, and Denver-based Genus Architecture are working on two design-building student residential projects at the WSU campus in Pullman with a combined value of $56 million.

One of the projects involves a $16 million renovation and expansion that’s under way at the Chief Joseph Village Apartments. The other project involves the construction of a $40 million Northside Residence Hall Phase 2 structure, along Colorado Street, just east of the women’s soccer field. BNBuilders/Genus Architecture and Bernardo|Wills recently won the contract for that project, and crews are set to begin work this spring.

The university-owned Chief Joseph complex is at the northeast edge of campus. The project will include adding 17 new living units and renovating 84 units. The complex will have just over 100 units when finished in the fall of 2016.

The 160,000-square-foot, 275-bed Northside residence hall will have a combination of single and double rooms, two- and four-bed semi-suites, and a number of apartment-type rooms. It also will have street-level retail space, a courtyard, and student common spaces. The Northside hall is slated to open by this fall.

A $13.5 million remodel and addition to Whitworth University’s music building is in the design process. The music center addition will comprise 21,000 square feet of new teaching studios, practice rooms, and lobby space. In the existing buildings, about 16,000 square feet of space will be remodeled. Of the estimated total project cost, about $11.5 million in funding already has been identified, says Lucas Beechinor, Whitworth spokesman.

The music center was built in 1978 with significant support from the Cowles Family Foundation. The new structure will be named the Cowles Music Center, in honor of the Cowles’ family support of the arts and education at Whitworth. The design firm on the project is Spokane-based Integrus Architecture PS. Beechinor says Whitworth will choose a contractor for the project once all funding has been identified.

The University of Washington plans to move later this year, following the completion of remodeling work, into a downtown building it has leased at 201 W. Main and that’s to be renamed the UW Spokane Center. The 2,250-square-foot building formerly housed the Spokane Visitor Information Center.

Located near Spokane’s University District, the UW Spokane Center will serve as a hub for Spokane-area alumni, students, prospective students, parents, and supporters with space for meetings and special events.

Spokane-based Blue Room Architecture & Design PS will lead the remodel project, which is expected to be completed in May.

John McLean, a principal at Blue Room Architecture, says the UW project is still in the early design stage, and a budget hasn’t yet been finalized.