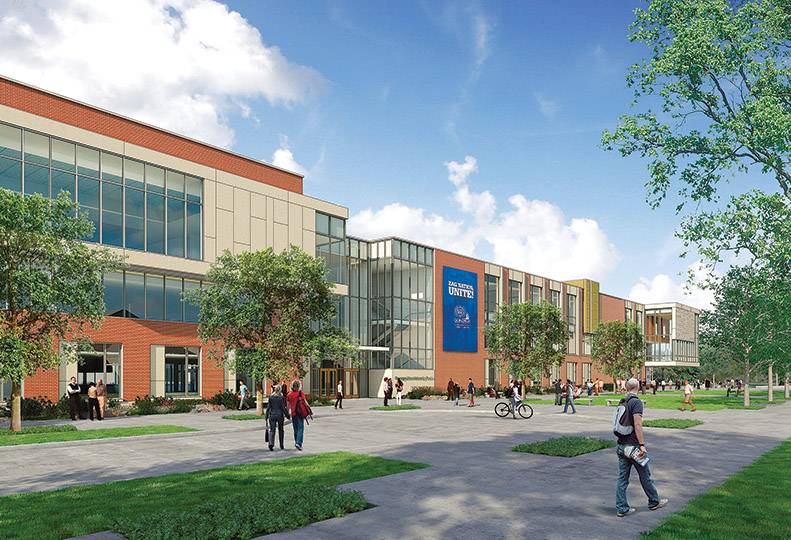 -—Gonzaga University
Gonzaga University is erecting the $60 million John J. Hemmingson University Center on the west side of its campus. The 168,000-square-foot, four-level structure is slated to be completed by the fall of 2015 and will replace the demolished COG building. 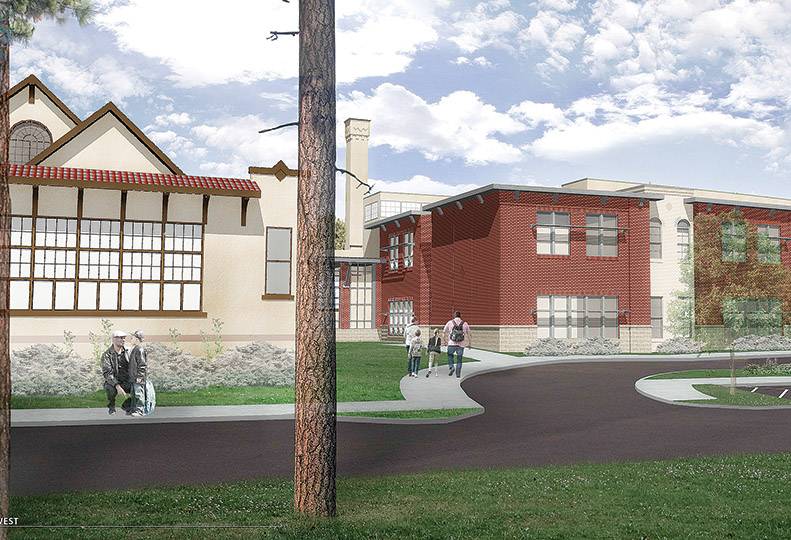 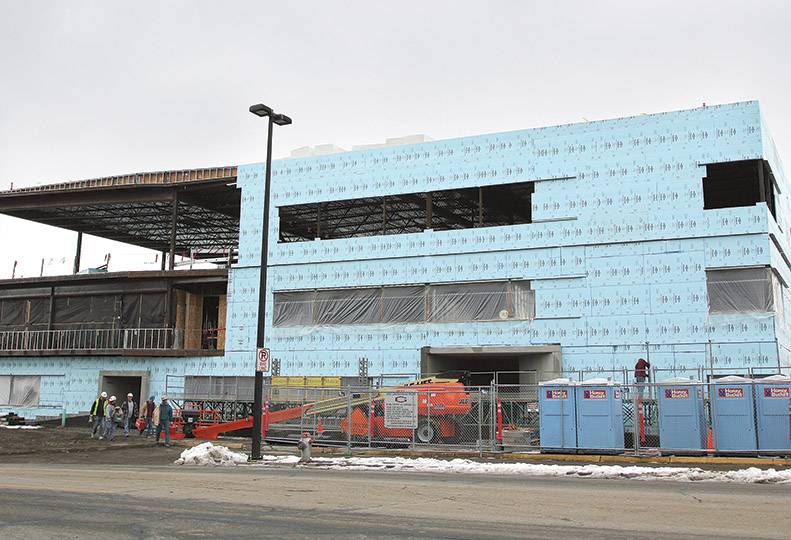 -—Linn Parish
The $16 million expansion at North Central High School will enable the school to expand its science department and to add six science laboratories. 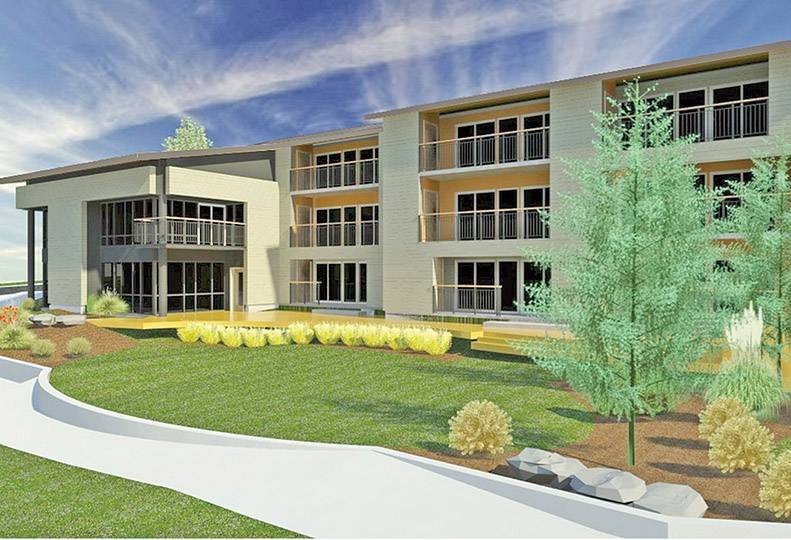 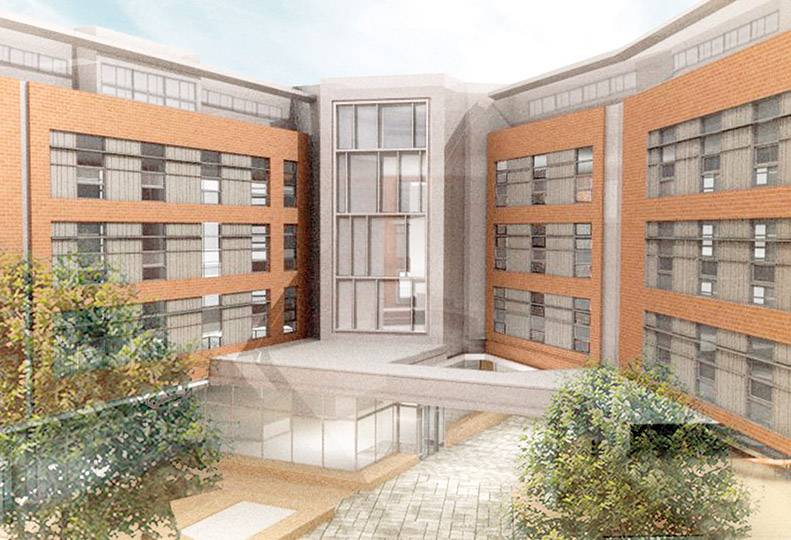 Capital projects in the education sector this year are robust in number and scope, with about $300 million in projects under way or expected to begin, including major construction jobs for Gonzaga University and Spokane Public Schools.

The Spokane school district has at least eight projects either started or about to begin this year that combined are valued at just over $200 million.

Meanwhile, another big job here that started last summer is erecting Gonzaga’s $60 million John J. Hemmingson University Center. The 168,000-square-foot, four-level facility will replace the university’s former 35,000-square-foot Center of Gonzaga student union building on the west side of the campus, at 702 E. Desmet. Gonzaga razed the old COG in summer 2013, and the new center’s opening is scheduled for fall 2015.

The new university center will have two levels of residential dining and several retail dining locations, as well as an 800-plus-seat multipurpose ballroom and space for the University Ministry, the Center for Global Engagement, the student body association, and other groups.

Spokane-area contractors and designers also are involved in other higher education jobs for the Community Colleges of Spokane, Eastern Washington University, and the Pullman campus of Washington State University.

At WSU, the team of Bernardo|Wills, the Spokane office of Seattle-based BNBuilders, and Denver-based Genus Architecture are working on design-build plans for two student residential projects with a combined value of $56 million.

One of the projects includes the $16 million Chief Joseph Village Apartments complex renovation and expansion that’s under way. The other project will involve building a $40 million Northside Residence Hall Phase 2 structure, along Colorado Street, just east of the women’s soccer field. BNBuilders/Genus Architecture/Bernardo|Wills recently won the contract for that project as well, and crews are set to begin work this spring.

The university-owned Chief Joseph complex is at the northeast edge of campus. The project involves adding 17 new living units and renovating 84 living units. The complex will have just over 100 units when finished in the fall of 2016.

The 160,000-square-foot, 275-bed Northside residence hall will have a combination of single and double rooms, two- and four-bed semi-suites, and a number of apartment-type rooms. It also will have street-level retail space, an exterior courtyard, and student common spaces. The Northside hall is slated to open by fall 2015.

For Community Colleges of Spokane, Meridian Construction Inc., of Spokane Valley, is working on two projects. One job involves constructing a $5.5 million, 22,000-square-foot addition to a student services building at Spokane Community College, in East Spokane. The architect on the project is Integrus Architecture PS, of Spokane.

Meridian also currently is erecting a $3.5 million early learning center on the Spokane Falls Community College campus. The 17,000-square-foot early learning center will be located in the middle of the SFCC campus in northwest Spokane. When finished in July, it will include three preschool rooms, a large kitchen, five offices, five toddler rooms, a conference room, and employee work areas. NAC|Architecture, of Spokane, is the architect on the project.

Meanwhile, in Cheney, Eastern Washington University has major projects either about to start or likely ready for design work this year. EWU jobs that are expected to get under way this year include a $7.2 million water system improvement for the entire campus, and construction of a $1 million recycling center that also will have storage space for university surplus property.

The Spokane office of Great Falls, Mont.-based Thomas Dean & Hoskins Inc. is the consultant for the water distribution system upgrades, which will include refurbishing a well, realigning piping, and replacing various water connections and fire hydrants.

Crews also will construct a disinfection-and-monitoring building at the base of a 1.1-million gallon storage tower. EWU plans to seek contractor bids in April and to have the work finished by July 2016.

The university’s planned recycling center will include 5,000 square feet of floor space for recycling operations, and a 3,000-square-foot area to store surplus property. The project is located on the far edge of the university’s property and across a maintenance field north of the football stadium. ALSC Architects PS, of Spokane, is the architect, and EWU plans to select a contractor in April for work to start in June.

For Spokane Public Schools, crews currently are working on a big Finch Elementary School renovation and addition project, which is expected to be finished by early October at a total cost of $26.9 million, says Greg Brown, the district’s director of capital improvements.

Located at 3717 N. Milton, near the corner of Garland Avenue and Driscoll Boulevard, the original school was built in 1924. With expansions, the structure had grown to 48,100 square feet of permanent floor space and 12,700 square feet of portable classroom space.

While the main building is being preserved and remodeled, an aesthetically compatible new east wing addition will connect to the existing north and south wings, so the completed structure will surround a courtyard. The addition will include at least 13 classrooms and bring the school to about 60,000 square feet of floor space.

Meanwhile, a major expansion project is under way at North Central High School, which is located at 1600 N. Howard. Garco Construction Inc., of Spokane, started work there this past summer on a $16 million, 40,000-square-foot science and technology addition.

The North Central project, which is expected to be finished in August, will consolidate the school’s science department into one building and will add six science labs. NAC|Architecture is the designer.

On Spokane’s South Hill, Garco Construction also is finishing up work on a major Ferris High School modernization and expansion project. This spring and summer, crews will be demolishing old school structures, installing athletic fields, and building a parking area.

NAC|Architecture designed the Ferris project. After $59 million in construction costs, and a total project cost of $86 million, the district expects the Ferris renovation to be finished in August.

Elsewhere on the South Hill, Spokane Public Schools has a $6.6 million project to renovate athletic facilities at Hart Field. Schimmels Construction Inc., of Spokane, began work there last summer when the company did a majority of the work and it will be finishing work on soccer fields and tennis courts this spring. Located north of 37th Avenue near the new Jefferson Elementary School, Hart Field is the home outdoor athletic venue for Lewis & Clark High School. Madsen Mitchell Evenson & Conrad designed the project to upgrade the nearly 32-acre athletic complex.

A $17 million renovation and addition project is set to start in April at Mullan Road Elementary, at 2616 E. 63rd on the South Hill. The district has selected WLK Joint Ventures, a Spokane-based partnership of Walker Construction Inc. and Leone & Keeble Inc., as general contractor and construction manager.

The construction at Mullan Road Elementary is expected to be finished by August of 2015. With the renovation and addition, the school will go from its current 51,400 square feet of floor space to 57,600 square feet. ALSC Architects is the architect.

Crews will demolish an older portion of the school called the Comstock section, a 1950s-era school structure moved from the Comstock Park area to Mullan Road and opened there in 1977, Brown says. Work also will include constructing about 17,000 square feet of new space as well as renovating an addition constructed in 1981 that has just over 40,000 square feet of space.

At Hutton Elementary, located at 908 E. 24th, Garco Construction will be the contractor for a renovation and expansion project that’s expected to start in June. The $28.8 million project will involve demolishing some portions of the structure, modernizing the original 1931 Spanish-style structure, and constructing new classroom wings.

The Hutton project also will include removing portable classrooms and expanding a parking lot area to lessen some of the congestion that occurs in the neighborhood when students are dropped off and picked up. Madsen Mitchell Evenson & Conrad is the architect on the project. The school will have 62,380 square feet of space when the project is finished.

Beginning this fall and during construction, Hutton students and staff will be housed in the old Jefferson Elementary campus, at the northwest corner of 37th Avenue and Grand Boulevard. The renovated Hutton school tentatively is scheduled to open to students in the fall of 2015.

Salk Middle School, located at 6411 N. Alberta St., is scheduled for a $14.5 million gymnasium replacement project beginning in late April. The district had planned to seek contractor bids during early March, Brown says. NAC|Architecture is the architect on the project.

For the Salk project, the district will be adding space for a fitness room, adding to existing gym space, and creating a boiler room. The job is expected to be finished by January 2015, and boost the facility from about 18,000 square feet to nearly 33,000 square feet in size.

Meanwhile, a $13.7 million addition to the NewTech Skills Center at 4141 N. Regal also is expected to start in April, with Graham Construction & Management as general contractor and construction manager. The two-level, 38,000-square-foot addition is scheduled to open in fall 2015, and it will connect to the south side of the 70,000-square-foot center.

The addition’s main floor is designed mainly to accommodate technology, computer programming, and culinary-arts programs. The second level will provide space for health-services programs, such as for nursing, dental, and medical training. The upper level also is expected to have space for about eight labs.

Bernardo|Wills Architects designed the NewTech addition, which is the first of two construction phases that Spokane Public Schools is envisioning for the skills center. Brown says a second phase that’s to be completed later will involve remodeling 27,000 square feet of the current facility.

Blew’s Construction Inc., of Spokane Valley, also has a technical school project under way in Spokane. The company is working on a $1.5 million second phase of remodeling work at Spokane Valley Tech, a technical- and career-based learning center for high school students.

Blew’s started work in December to upgrade 7,800 square feet of space in the center at 115 S. University for a second biomedical lab, three additional classrooms, and an administrative office.

The Valley center is a collaboration of Central Valley School District, which is acting as the host district, and East Valley, West Valley, and Freeman school districts. The center provides programs to junior- and senior-year high school students to help them gain technical skills and experience in preparation for careers involving science, technology, engineering, and math. Architects West Inc., of Coeur d’Alene, did the design work.

Longer term, EWU also has additional major projects totaling $128 million that could go into the design phase this year, pending approvals and funding. They include a proposed $74 million science building that would the first of two similar-sized sciences buildings planned on campus, a $35 million student union building upgrade, and $19 million in upgrades to athletic facilities.

The science building is planned on the south end of campus to house chemistry and physics departments. Early concepts envision a multistory, 100,000-square-foot building that would include labs, offices, classes, and support space. EWU has sought legislative funding for design of the building, and if approved, the university has said it will request construction funding in the 2015-2017 capital budget. Construction could begin as early as the summer of 2015.

ALSC Architects has done some design consulting for projects at EWU’s Washington Street athletic facilities that are estimated to cost $19 million. EWU is adding women’s fast-pitch baseball as a sport, so it plans to build a new baseball field, while doing other upgrades to athletic facilities.

If approved, for state funding EWU would move ahead with financing and final design toward construction to begin summer of 2015.

Following a few years of construction activity, Whitworth University on Spokane’s North Side doesn’t have any projects lined up this year, says spokesman Lucas Beechinor.