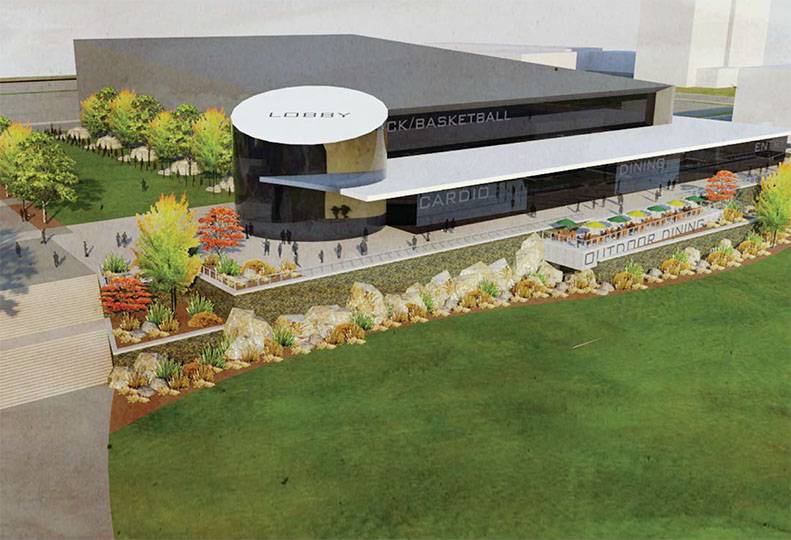 -—ALSC Architects PS
As proposed, the field house would be constructed about a block east of the Spokane Veterans Memorial Arena, across the Spokane River from the city’s core.

The Spokane Sports Commission is seeking a $250,000 legislative appropriation to begin the preliminary design phase of an envisioned $20 million-plus field house and event center that would be developed on mostly city-owned property north of the Spokane River, near Riverfront Park.

The funding would push the proposed sports complex past the initial concept stage and into a more detailed planning phase, says Eric Sawyer, the commission’s president and CEO.

“That’s an important piece of the puzzle that helps deliver an understanding of what the facility could do for the community and what it’s going to look like,” Sawyer says of the preliminary planning process. “We’ve got concepts, but they may or may not be realistic.”

The Spokane Sports Commission is a nonprofit coalition of regional government and business volunteers that recruits and develops sports-related events.

The preferred site for the proposed facilities is on roughly one city block of land, west of the Broadview Dairy building and a block east of the Spokane Veterans Memorial Arena, Sawyer says.

Most of the envisioned field house site is on a portion of 10 acres of land known as the north bank property for which Spokane Parks and Recreation is developing a master plan.

As the field house complex is envisioned, a section of Cataldo Avenue midway between Howard and Washington streets would be vacated where the facilities would be built, Sawyer says.

Earlier this month, the Spokane Parks and Recreation Board approved a resolution recommending legislative approval of the preliminary design-funding request.

“We’ve always had support from Parks,” Sawyer says. “This formalizes it in a resolution.”

He says the request has the support of state Reps. Jeff Holy and Marcus Riccelli.

“I think there’s support at the state level,” Sawyer says, “But there’s still a question of whether there’ll even be a capital budget.”

As the Journal first reported a year ago, the commission estimates the total cost for the proposed 127,600-square-foot field house and ice rink complex would be $20 million to $25 million.

The field house complex would be designed to enhance the participants’ experience, Sawyer says, adding that the Spokane area lacks such facilities.

“We’ve identified 300 events that we can’t host—ranging from gymnastics to table tennis events—because we don’t have a facility to accommodate them,” Sawyer says. “What we need is a facility that supports athletes in large-participation events.”

The Spokane Sports Commission has hired a consultant, The Sports Management Group, of Berkeley, Calif., to study the facility’s potential economic impact.

“The study estimates the facilities would lead to an additional $10 million to $15 million in annual direct tourism spending,” Sawyer says.

The ice rink component of the complex is still a moving target, Sawyer says, adding that indoor ice rinks are expensive to maintain and operate.

“That’s the challenge. It really has to be justified by demand and programming to pencil out,” he says. “It could host a number of events and serve as a practice site for the Spokane Chiefs, a Western Hockey League team, he says.

He says Parks and Recreation also has its own commitment to maintain ice. “We don’t want to step on Parks’ toes,” he says.

The PFD, with its resources and expertise, likely would provide cost advantages in operating the proposed facilities, Sawyer says, adding, “It fits what they do.”

Once a preliminary design is approved, supporters will have a better target on which to focus construction funding options, he says.

Options include a vote for public funding as part of Parks and Recreation’s master planning, or a private-public partnership, or a combination of the two, Sawyer says.

“We have the site. We have ownership and operations,” he says of the current vision. “Now we have the $25 million gorilla to deal with that it’s going to take to build.”

The preliminary-design process, which would include opportunities for community participation, would help shape what the facility would look like, including proposing construction materials, Sawyer says, adding, “It has to enhance the north bank area and be consistent with what Parks wants to do.”