Work on first units could gear up this spring 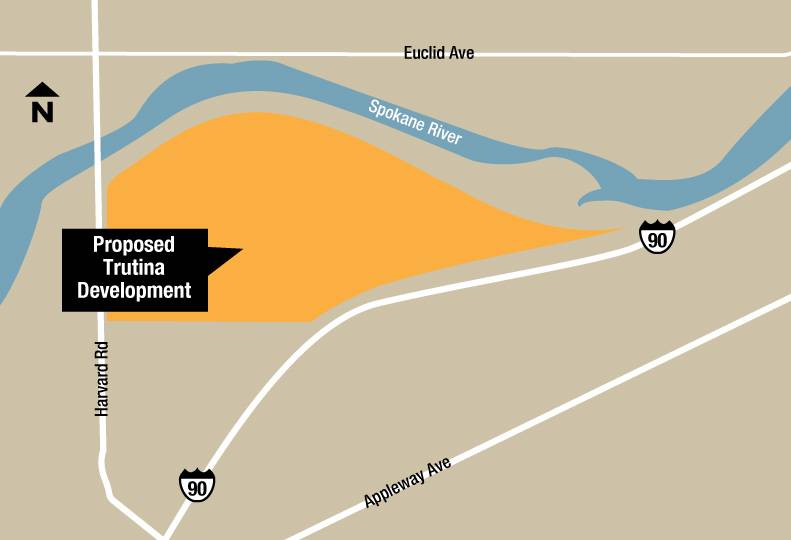 Rivercrossing LLC, an affiliate of Liberty Lake-based real estate development company Greenstone Corp., is planning a subdivision in Liberty Lake’s River District that would include about 500 residential units and future commercial development.

The Trutina subdivision would encompass 137 acres of land south of the Spokane River, north of Interstate 90, and east of Harvard Road, says Kevin Schneidmiller, Rivercrossing representative and Greenstone’s vice president of land development.

Schneidmiller says 363 residential lots would be located on 78 acres of land mostly on the eastern half of the Trutina subdivision, and commercial development, including multifamily rental housing, is planned on 37 larger lots on the west side of the subdivision.

Construction on the residential portion of the development would begin this spring and be phased over several years, followed by commercial development.

Schneidmiller declines to disclose a pricing range for the homes.

“They certainly will have a variety of price points,” he says.

The development as proposed, however, appears on its face significantly larger in scope than the 225-unit, $45 million-plus River Crossing North subdivision that Rivercrossing began work on last year, and where homes are currently under construction.

River Crossing North is a mile west of the proposed Trutina development.

“Trutina will have a wider variety of home offerings,” Schneidmiller says.

The Trutina proposal is under environmental review by the city of Liberty Lake’s planning and building services. A notice of application says the city expects to issue a mitigated determination of nonsignificance, which likely would require the developer to participate in an updated Harvard Road improvement plan, among other conditions.

The proposal also will be subject to a public hearing.

Residential units would be marketed to mid- to high-income residents, the application for environmental review says.

Houses likely would include two-story townhomes, cottages, and other single-family homes with one to three stories, and would have 1,250 square feet to 2,500 square feet of living space, Schneidmiller says.

The name Trutina comes from the Latin word for balance, he says.

“We will target the empty-nester type of community that’s at the point in their lives that’s balanced between work, living, and playing,” he says.

Trutina would be a maintenance-free community, Schneidmiller says.

“All yard maintenance will be taken care of,” he says.

Apartments and some townhome-style rental units would be constructed in commercial lots near the river, adjacent to the main residential section of Trutina, he says.

The Trutina development site doesn’t have any structures on it currently. Most of the land has been used historically for grain and alfalfa production, and a portion of it is undeveloped, the environmental application says.

Adjoining land uses include residential and commercial development and a wastewater treatment facility.

Trutina would be served by public and private interior roads that would connect to Harvard Road and an extension of Indiana Avenue, a preliminary plat map shows.

A trail system would have connections to the Centennial Trail and an existing trail adjacent to Harvard Road.

Schneidmiller says the developer has no specific plans yet for most of the commercial lots.