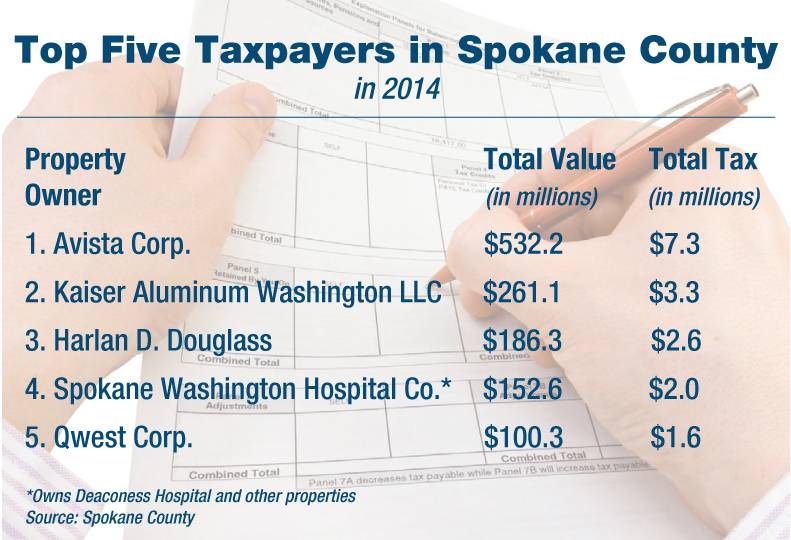 The rate of increase, though, was substantially slower this year than the 16 percent jump in 2013, compared with the prior year’s total tax assessments for top taxpayers in the county.

Don Falkner, Avista’s tax director and assistant treasurer, says much of Avista’s growth in valuation is due to infrastructure and facility improvements the company is making.

“You can’t get around the fact that we’re in a capital-expenditure mode and will be there for the foreseeable future,” Falkner says.

Spokane real estate magnate Harlan Douglass is third in the Spokane County property taxpayer rankings with a tax levy of $2.6 million on 389 properties valued at $186.3 million. Douglass’ tax levy was up slightly from his 2013 assessment.

Spokane-based Inland Empire Paper Co. and Qwest Corp., a Denver-based real estate holding company for the communications company CenturyLink Inc., are ranked fifth and sixth, each with tax bills of $1.6 million, although Qwest’s 2014 tax bill is 12.4 percent lower than its 2013 bill.

Cedar Chateau/Creek/Springs Properties, a holding company for three large Spokane-area apartment complexes, held its ranking of seventh in the county with a tax bill of $1.4 million, on properties valued at $108.4 million.

Fort Worth, Texas-based BNSF Railway Co. is eighth in this year’s rankings, with a $1.3 million tax bill.

Hollister-Stier Laboratories LLC, the Spokane-based real estate holding company for Jubilant HollisterStier Contract Manufacturing & Services, jumped to 10th in the taxpayer rankings in 2014, with a tax bill of $1.2 million. The sterile allergy product maker, a subsidiary of India-based Jubilant Life Sciences, was ranked 15th among Spokane County property taxpayers in 2013.

Worthy is developing the 716-room Grand Hotel Spokane near the Spokane Convention Center downtown, and earlier this year announced an agreement to franchise the Davenport Collection hotels with Marriott International’s Autograph Collection.

The second-half property tax bill for those who pay in two installments was due Oct. 31.

Property taxes billed in 2014 are based on 2013 assessed values.