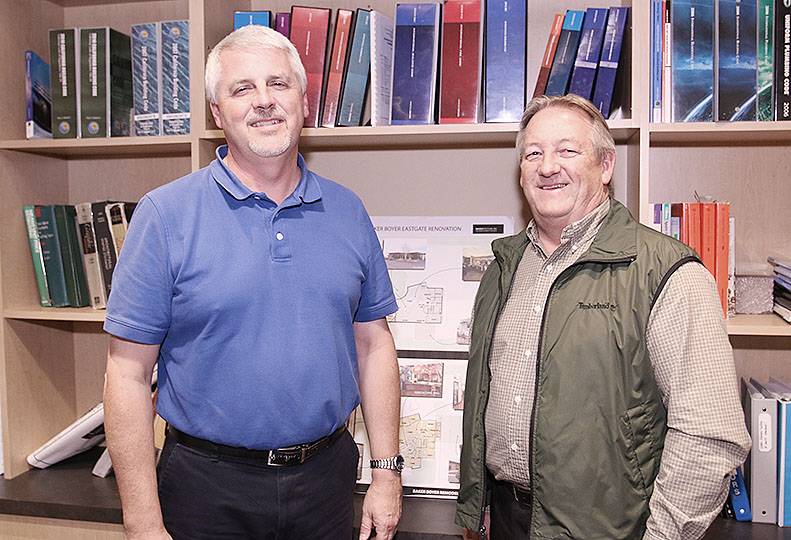 -—Mike McLean
Cory Trapp and Gordon Longwell say more than 80 percent of the firm’s current work is in North Idaho, although Longwell+Trapp’s architects are licensed in 10 other Western states. 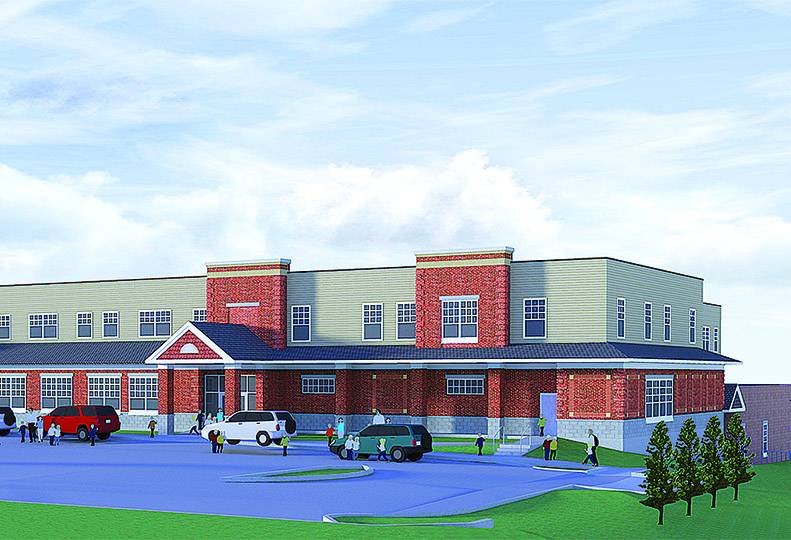 -—Longwell+Trapp Architects PLLC
The $6.6 million rebuild at Winton Elementary School, depicted above, is one of three projects in the Coeur d’Alene school district that Longwell+Trapp has designed recently.

Longwell+Trapp Architects PLLC, of Hayden, has seen steady work in both private and publicly funded projects in the last two years, although the company still is leaned out somewhat from the Great Recession, says founding principal Gordon Longwell.

The firm has a staff of six, including Longwell, principal Cory Trapp, and another architect, down from prerecession staff of eight, and a staff high of 14 people 20 years ago.

Longwell grew up in northeastern Nebraska and worked the first four years of his architecture career in Iowa. He then moved to North Idaho where he worked briefly for two other firms before opening his own office in 1984.

Trapp, a Kootenai County native and University of Idaho graduate, joined Longwell in 1984 and became a partner in 1999.

In the years leading up to the recession, one of Longwell+Trapp’s specialties was custom-home design, which made up about 25 percent of the firm’s total billings. That market, though, has nearly disappeared, Longwell says.

“There’s not as many wealthy people moving here,” he says.

More recently, schools and commercial projects have comprised the majority of the firm’s design work.

Longwell says the firm’s revenue this year is trending upward 5 percent to 10 percent compared with 2013 revenue.

Trapp says the post-recession low point was in 2012, when the firm cut back to three-quarter time to avoid additional staff cuts.

“This year has been steady,” Longwell says. “We’ve done a lot of school work.”

“That has helped keep us busy the last year and a half,” he says.

The firm is a subconsultant to Coleman Engineering Inc., also of Hayden, in a value-engineering contract with the Wyoming School Facilities Commission, a job that currently hauls in 10 percent to 15 percent of Longwell+Trapp’s revenues.

As part of the contract, which Wyoming first awarded in 2002, the value-engineering team evaluates deficiencies in public schools throughout the state and develops design guidelines. Value engineering also involves verifying that projects address and resolve safety and energy-efficiency issues in a cost-effective manner, Longwell says.

“I think that means we’re doing a good job,” he says.

On the private and commercial side, Longwell+Trapp has designed a number of projects in recent years for affiliates of Coeur d’Alene-based Hagadone Corp. and its CEO, Duane Hagadone.

“It wasn’t big work for Duane Hagadone, but it was steady for us,” Longwell says.

He says the recession hit Longwell+Trapp a year or more later than it hit others in the architecture industry in the Inland Northwest because the firm’s revenue was being buoyed back then by a big project in Casper, Wyo.

“We were designing a $14 million private elementary school,” he says. “We didn’t start slowing down until 2009.”

When billings did dwindle, Longwell and Trapp, with Jim Coleman, of Coleman Engineering, tried to bootstrap their way out of the recession by developing the 27,000-square-foot LCT Professional Office Building, at 8382 N. Wayne Drive, in Hayden.

The developers had originally envisioned the project as a multifirm, full-service design and engineering center.

“We were hoping it would be a stimulus for a turnaround,” Longwell says.

Other tenants were to be design and engineering services that would complement each other.

Trapp says, “We had 65 percent of the space precommited, but because of the economy, they backed out.”

Longwell+Trapp occupies 3,300 square feet of office space on the top floor of the two-story building. Coleman Engineering also is on the second floor.

Trapp says about 8,500 square feet of space in the building remains vacant. The building owners are courting a prospective tenant, which he declines to identify, that would occupy most of that space.

Longwell says 80 percent to 90 percent of the firm’s current work is in North Idaho, although it’s licensed in 10 other Western states, including Washington.

“When we were larger, we needed to reach out farther to keep cash flow,” Longwell says. “Now, the need or desire to go that far away is much less.”

Still, though, because there are fewer publicly bid projects now than in years preceding the recession, the competition for them is tougher.

Some public works projects have attracted 18 to 25 bids recently, with many bidders coming from three or four states away, compared to the historic average of four or five mostly local bidders for such projects, Longwell says.

Longwell has played that game, bidding for projects out of state, but prefers the home field.

“We did a high school in California 20 years ago,” he says. “That took is out of local work for a while. We prefer to do work right here.”

He says most of the company’s out-of-state work is for clients based in the Inland Northwest.

Prior to the recession, for example, Longwell+Trapp, designed eight to 10 projects a year for Sterling Bank, the former Spokane-based bank that has since been acquired by Portland-based Umpqua Holdings Corp.

As the economy improves, Longwell says he’s optimistic the firm’s history with Sterling will help land the firm work with Umpqua and other banks.

“Some lending institutions are starting to do capital improvement projects for themselves,” Longwell says. “That sends the message they are confident with the economy.”