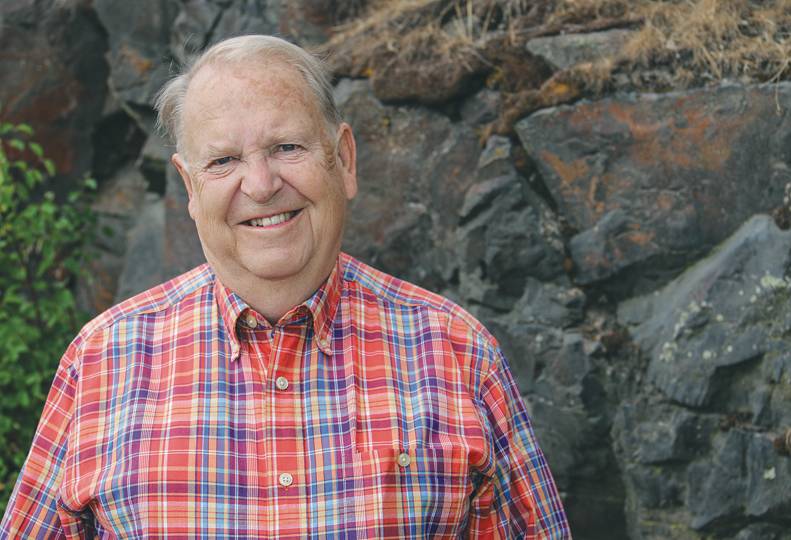 In a career that spanned close to 50 years, Robert Wills was never known for pompous presentations.

Instead, the co-founder of Bernardo|Wills Architects PC won clients and colleagues over with a humble approach that conveyed layers of insight with a polite pass on self-promotion.

“Bob is so soft-spoken, but he could take control of a room,” says Hollis Barnett, vice-president of Spokane-based Garco Construction Inc., who worked with Wills on a variety of projects over nearly 20 years. “People are engaged because of his character and humility.”

As for his selection as a Business Icon, Wills, who retired last year, deflects the attention in typical fashion.

“There are certainly other very, very deserving architects in the Spokane area,” Wills says. “I don’t consider myself an icon of architecture. I just happened to be going through the business of being an architect and kept it going.”

After graduating from the University of Southern California in 1969 with a bachelor’s degree in architecture, Wills moved to the Inland Northwest in 1971 as part of a 4 1/2-year commitment as a pilot in the U.S. Air Force. After college, he had completed officer training school along with primary and advanced flight training in Oklahoma before landing at Fairchild Air Force Base.

Wills’ journey into architecture began when he was hired by Warren C. Heylman & Associates in 1973.

“Nobody was hiring at the time,” Wills recalls. “I got down to the last couple of names in the phone book. Warren was traveling in Europe, but I did get hired.”

He hit the ground running with foreign exhibit buildings for the Expo ’74 World’s Fair. The mix of theoretical and practical design for Expo was a good fit.

“It was very similar to what I’d done in school,” Wills says. “We were trying to develop a structural system where everything fit together.”

Wills remembers his time at Heyman as “a good training ground with many opportunities.”

“I was able to meet some very influential people in Spokane,” Wills says.

While Wills counts pioneers of the mid-century modern style like Bruce Walker and Ken Brooks as influences, his list of mentors is limited to Heylman.

“Not only for his early architecture but he was also a very good businessman,” Wills says. “The latter helped me immensely establishing our business.”

A decade after launching his career, Wills was introduced to a new co-worker at Heylman who shared his roots at USC. In addition to a common interest in the Trojans, Wills recalls Gary Bernardo having a similar design philosophy.

“It was very easy for us to work together,” Wills says.

In 1991, Wills and Bernardo forged out on their own, establishing a firm that began modestly with makeshift desks consisting of doors balanced on sawhorses.

“My goal was to have my own firm, even in school,” Wills says. “When I was first at Heylman, I couldn’t interview the project and bring it in. I wanted to be the cook in the kitchen with the recipe. That was the way I wanted to practice architecture, to be fully involved.”

Bernardo remembers launching the venture with Wills as “a moment of real trust.”

“I’d worked on projects at Heylman under Bob’s leadership,” he says. “He was a great mentor during those years, clearly a person I could look up to. When we started the firm, I knew that no matter what happened, we had each other’s back.”

From the start, Wills tackled public-sector work while Bernardo focused on private-sector projects.

The firm’s first two successful bids involved a Safeway store in Wenatchee, Washington, and a church on Spokane’s South Hill.

“There were a lot of unknowns at first,” Wills says. “We both quickly realized we were not good typists when we needed to send out a bill. Then there was AutoCAD that was just being utilized. Gary and I were still pencil and pen.”

“Bob is the kind of guy who took the high road,” he says. “He was always above reproach. That’s the way he conducted his personal and professional life.”

Travis Taylor was working as the director of facilities and operations at Wenatchee Valley College in 2002 when he first met Wills.

“His firm was working on campus,” Taylor says. “I went to a meeting, and Bob was the only person in the room wearing a tie. I just remember him being super professional, super intelligent. He understood how building, architecture, and construction worked but he also understood the business side and got to know the needs of the clients.”

Wills was involved in upgrades at the college through 2008 and later worked on projects with Taylor when he transitioned to facility supervisor at the Grant County Public Utility District, in Ephrata, Washington.

“Bob had the ability to problem solve and think outside the box,” Taylor says. “Everything about him is first class.”

By the end of the firm’s second year, 10 employees were on board. By 1998, Bernardo|Wills occupied the entire fourth floor of the Tomlinson Black Building, downtown. The staff count now hovers at close to 50.

“Bob is one of those people who’s just a born teacher,” says Renz, the firm’s business manager, who started there in 1991. “He really invested in us as people.”

Renz tells the story of Wills writing a recommendation letter on her behalf when she was in the process of adopting her son.

“He didn’t have to do that, but that’s just who Bob is,” she says. “He cared about me as an employee and a person.”

He also designed a variety of buildings at Fairchild Air Force Base; and projects through Community Colleges of Spokane and Spokane Public Schools. Wills and Bernardo were also on the cutting edge with design-build methods now viewed as commonplace.

“Bob has certainly had an influence on the community,” says Barnett. “He brought engagement and his solutions were very clear. I know he is very well respected and liked among all his peers and subconsultants.”

Bernardo says his former partner’s impact will be felt beyond blueprints and buildings.

“I think his legacy will be less about the projects and more about the way he conducted his life,” Bernardo says. “He’s just a good guy.”