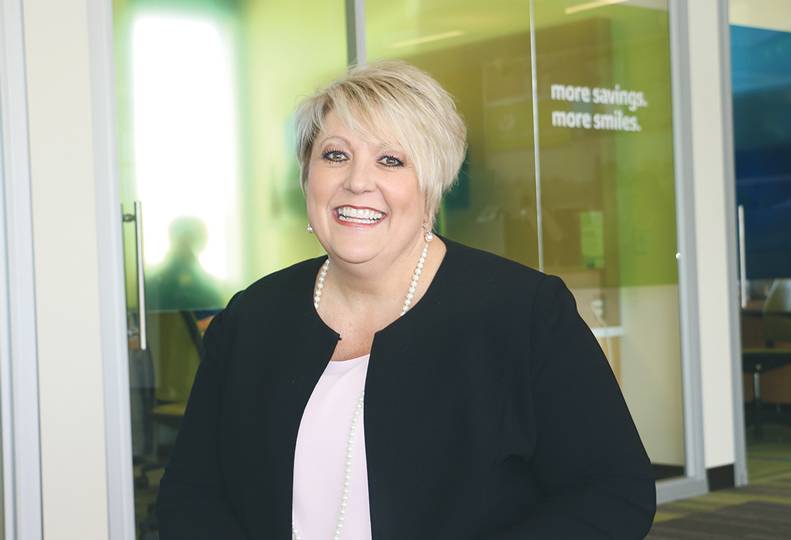 Meanwhile, Numerica Credit Union of Spokane Valley is about two months into a complete overhaul of a branch located at 303 E. Lyons in North Spokane and will soon refurbish its South Hill branch at 2202 E. 29th.

Although most Americans today perform some or all of their financial transactions online, industry officials say the role of the branch banking continues to remain a vital part of their daily operations.

“Yes, digital is putting pressure on bricks and mortar,” says Kelly McPhee, Spokane-based vice president of communications and public relations for Banner Bank. “But we also now know clients want it all.”

Banner Bank, which is headquartered in Walla Walla, Washington, has 189 locations that include branches and loan offices serving clients. That figure is down from 208 in 2018, according to McPhee.

Banner Bank has a four-state footprint that includes Washington, Idaho, Oregon, and California and has just over $16 billion in managed assets, according to the company’s website.

McPhee says mobile and online banking use soared in the last 15 months as a result of temporary—but prolonged—branch closures due to COVID-19 restrictions. However, Banner customers are gradually returning to branch use, she says.

McPhee says Banner experienced mobile banking deposits of $459 million in 2020 up from $199 million the year prior.

While growth in mobile and other types of digital banking continue to grow, McPhee says providing face-to-face service will always be a vital component of Banner’s service to its clients.

“This shifting over time enables us to evaluate the roles of our bankers … they can meet the evolving needs of our clients,” she says.

“I look at Apple stores, which probably support one of the most digital industries we have, but yet they still have brick-and-mortar,” Sherman says.

In her view, branch and digital banking have largely fused.

With $3.6 billion in assets, nearly 85% of all Numerica customer transactions are performed digitally. And 30% of those digital transactions now are being executed through video banking in which customers can participate in FaceTime-style video calls with Numerica representatives either working at a branch or at a remote location. The company launched its video banking feature last fall, she says.

In an effort to keep up with the increase in demand for online services, Numerica has increased its workforce 4% to a total off 599 employees since the end of 2020, Sherman says.

“But we still run hundreds of thousands of transactions per year through our branches,” she adds.

Numerica has three North Idaho branches located in Coeur d’Alene, Hayden, and Post Falls. The credit union’s 18 remaining branches are in Washington, with the largest concentrations in the Spokane and Tri-Cities areas, according to the credit union’s website.

“We really want our members to be able to connect with us and be able to serve them how, where, and when they want,” she says.

Numerica officials have discovered through customer surveys that the heaviest users of digital banking are the ones who express their strongest affection for being able to access branch banking if necessary.

COVID-19 pushed branch banking in 2020 to unprecedented lows due to branch closures. In 2021, however, Numerica has seen about an 80% return of customer transactions at branches, Sherman claims.

“In general, over the last five to seven years, our transaction count has decreased in the branches,” she says. “It’s the case for every financial institution in that we will need fewer branches in the future because of digital, but they’re still an essential part of our organization.”

Sherman says she’s never heard discussions at the executive leadership level in which the elimination of branches was suggested during her 28-year career at a number of financial institutions across Washington state.

“The conversations were mostly about consolidation,” she says. “Internally, most financial institutions realize that you cannot replace the face-to-face experience with the member. That is how we build the trust and the relationship.”

At the branches, Sherman says it’s not uncommon for customers to enter and just want to have someone to talk with about their money.

“People’s finances are so personal to them,” she says.

Sherman says the financial sector has had to adapt to the changing trends in customer behaviors. Where once branches were designed in large part to enhance employee efficiency, now they’re built with extra features specifically to serve the evolving desires and needs of customers.

Sherman points to Numerica’s branch at 4909 E. Sprague, which was completed in 2015, as an example of that.

The 3,800-square-foot branch is an airy facility that has an oversized door that can open on warm days. For members with children, the branch also has designated space for the young ones to keep themselves occupied with electronic tablets.

Though not a bank or a credit union, Spokane-based Ten Capital Wealth Advisors LLC recently moved its offices to the newly redeveloped Wonder Building at 835 N. Post, from a second-floor suite in the Chase Financial Center, at 601 W. Main, downtown.

Ten Capital CEO and founder Tim Mitrovich says it was always his goal to operate a company that was more engaged with clients than what has been customary in the industry.

“We’ve always been a relational firm, and we think we’ve taken that to the next level,” Mitrovich says.

Ten Capital has a long-standing practice of offering in-person financial planning lunch-and-learns, which at the most could host a half-dozen clients in a boardroom. Its new working space now can seat in excess of three-dozen people, Mitrovich says.

“We wanted to look at our office in an entirely different way,” Mitrovich says. “We’re getting a lot of referrals right now, and our new clients are just blown away.”