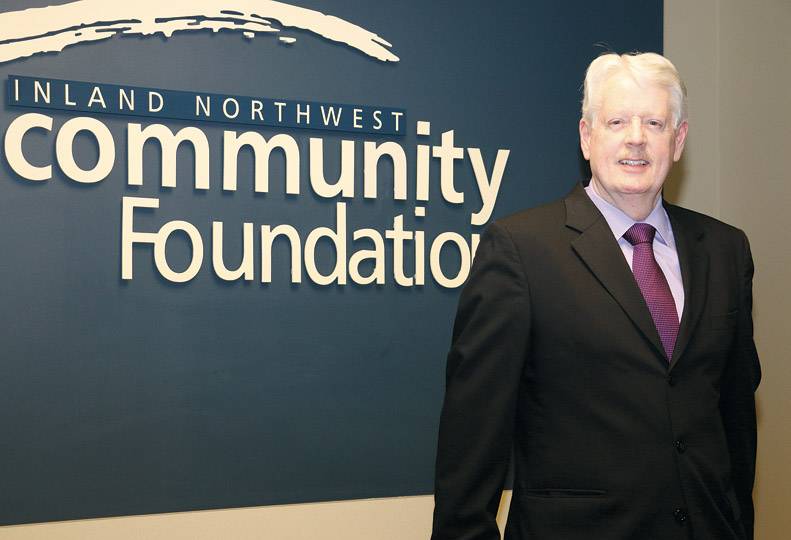 Inland Northwest Community Foundation, the Spokane-based nonprofit that manages assets for charitable organizations and donors, has seen extraordinary growth during the past few years, says Mark Hurtubise, the organization’s president and CEO. He attributes the growth to achieving goals the board established nine years ago.

“Starting in 2006, we started looking at the organization and designed a strategic plan that would take us into the future,” says Hurtubise, who has been with the foundation since March 2005.

Today, INWCF employs nine people and relies on more than 125 volunteers who serve on boards, various committees, or as ambassadors to the organization. To date, the foundation has awarded over $51 million in grants and scholarships in its region—20 counties throughout Eastern Washington and North Idaho—since the foundation was established in 1974, he adds.

At the end of INWCF’s 2014 fiscal year last June 30, the foundation was managing total assets of $87.2 million, up substantially from $75.8 million at the end of its prior fiscal year, Hurtubise says. During that time, the number of total funds managed by the foundation rose to 408 from 374, he says.

At the end of last year, midway through its current fiscal year, the foundation was managing total assets of $91.3 million. Of that amount, about a third, or $29.9 million, was in endowed discretionary funds. Those are funds that haven’t been selected for any particular program by donors.

In the month of December alone, Hurtubise says the foundation received $6.5 million in donations, with gifts ranging from $20 to $3.2 million.

“There were three $1 million-plus donations to establish new funds at the foundation from regional professionals who assisted their clients with establishing these new funds. These donors were individuals,” he adds.

Hurtubise says, the foundation has grown the assets it manages by an average of $5.2 million per year, from $1.5 million in 2006. Since that year, the total number of funds managed by the foundation has risen from 223 to 425 as of Dec. 31, and the total dollar amount of grants issued each year has grown from $700,000 to $3.3 million.

“This increase in phenomenal community support is a tremendous example of individuals and organizations coming through to strengthen our communities,” he says. “A portion of the earnings from these endowed discretionary funds have the potential of being used for current and future co-funding collaborative community initiatives.”

One thing that evolved after many debates and discussions at the board level in 2006, was that the foundation’s vocabulary had to change—and with it, behavior.

“We had to be proactive. We had to be conveners, collaborators, and we had to be a catalyst in the community,” Hurtubise says.

He says the board wanted to create a neutral venue for the community to discuss and debate community priorities and for the board to determine how to put resources behind those priorities.

Hurtubise says the foundation’s positive momentum is being fueled by its programs and the visibility of positive outcomes within those programs.

One successful program Hurtubise points to is Community Partners for Middle School Success (CPMSS), a collaborative working to improve educational attainment for students at Shaw and Garry middle schools in Spokane.

Each partner donated $50,000 toward the grant. The foundation awarded a three-year, $400,000 grant to Community Partners for Middle School Success.

The grant, which has been managed by Gonzaga University, provided the group, which already identifies at-risk students entering Garry and Shaw middle schools each fall, with funding to enhance and expand services available to students and families. The two middle schools feed John R. Rogers High School in northeast Spokane.

Bob Larson, former INWCF board chairman and a private wealth adviser with nationwide broker Merrill Lynch, has been a board member since 2008. Larson says he wasn’t really surprised when he saw the most recent numbers showing the success of the organization. Having been involved with INWCF since 2004, Larson says he knew the 2006 strategic plan would work if the organization didn’t get distracted.

“We knew if we followed the strategic plan and were intentional about it, it would be successful,” Larson says.

The board focused on getting advisers in the community to be conduits for the organization, people such as estate planners, attorneys, and tax accountants, to name a few, that they would recommend INWCF to their clients, he says. The foundation set up forums to connect with advisers focusing on topics such as donor-advised funds, and the information spread through word of mouth.

“And you could see that word spread because we also put a face to the INWCF with board members networking in the community,” Larson says. “We opened a dialogue.”

He says the board focused on advisers instead of the dollars. “We thought if we get to them (advisers), the right things will happen and it’s the best way to support these causes. That’s a win-win for everyone.”

Larson says since the strategic plan was implemented, leadership always seemed to fit whatever was needed at any given time.

“It is interesting … the different strengths we brought to the board. The right person always seems to be there when needed,” he says. “Everyone checks their ego at the door. We do the best we can for the community, with everyone willing to take on certain roles, collaborate with their peers, and we get results.”

Larson says another big reason for INWCF’s success is the leadership Mark Hurtubise provides. He says Hurtubise changed how the foundation is seen in the community and changed the organization’s message to, ‘What do you want to do, and how can we help?’”

“Mark Hurtubise is one reason we’ve been so successful,” he says.

Charlie Nipp, owner of Parkwood Business Properties, of Coeur d’Alene, who has been on the INWCF board since 2010, says the organization has helped the community face difficult challenges such as the homelessness of children and poverty in the community.

“We’ve found partnering with agencies is the answer,” Nipp says. “We needed to find new ways to meet those challenges and build new partnerships. We are building bridges to transform the community and people have responded by giving to the foundation.”

People are showing they have confidence in INWCF and understand its mission, Nipp says.

Sandy Patano, owner of Sandy Patano Consulting LLC, based in Coeur d’Alene, is a former chairwoman of the INWCF board. After she was approached to join the board, Patano says she was impressed with the staff of dedicated professionals employed by the foundation as well as the volunteers.

She says that, after having worked in nonprofits and the government, she was a little jaded.

“The money isn’t always spent well, although they work hard,” she says. “Here was a foundation that works with people, and makes gifts to causes, in a community they care about.”

Patano says she joined the board in 2007 right after the strategic plan was implemented. She agrees that Hurtubise’s leadership is, in large part, responsible for the success of the foundation.

“He is sincere, talented and understands the role of president and CEO,” she says. “He’s creative and is not interested in doing everything himself. He believes that overall success depends on partnerships. The foundation is laser-focused on critical problems in the community.”

Hurtubise says he is looking toward the future. He says INWCF is a neutral zone where people can come together to create a dialogue and debate, to find a solution to a problem that exists in the region.

“We have to collaborate. A committee can be a lot more intelligent that the most important person sitting in the room,” he says. “Collectively we give visibility to an issue, and we are going to need enough collective imagination to take us far beyond where we are today.”

Hurtubise says donors are speaking when they donate money

“They’re saying we love this place; we’ve been successful in this place and we want to have a great future. And they’re using the Community Foundation to help fulfill that dream,” he says, adding that the dollars aren’t the ultimate goal.

“The ultimate goal is about building assets. What assets mean—those donors are attaching hope to those dollars,” he says. “Hope for change and growth … when I talk to a donor who provides $1 million in assets, the discussion is rarely around money. It’s around what aspirations they have, what legacy they want to create, and what memories they want to have for themselves and their families. What they’re hoping to do with their investments is to improve people’s lives. That is way beyond what is in the bank.”