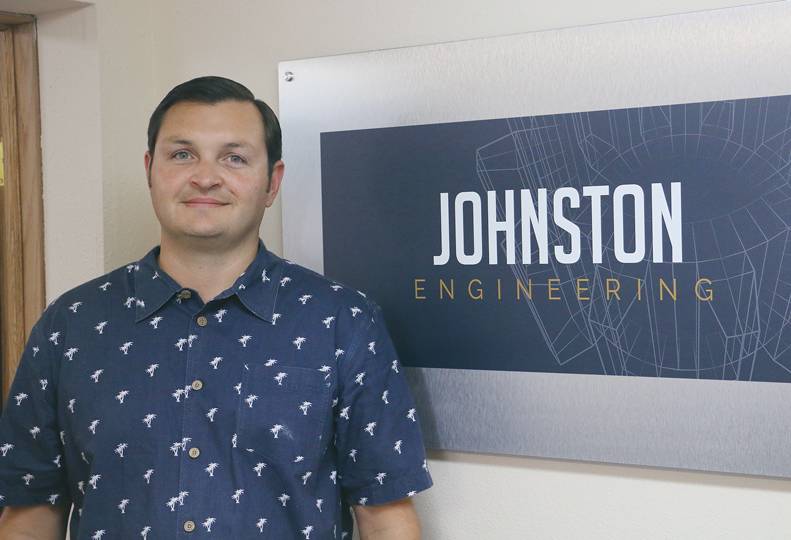 -Natasha Nellis
Andy Johnston, owner of Johnston Engineering, says the fi rm’s revenue has grown consistently at 30% annually since its founding in 2016.

Johnston Engineering PLLC saw its strongest year-over-year growth last year and is on track to meet or exceed that level this year, says owner Andy Johnston.

The company has seen 30% annual revenue growth consistently since its founding in 2016. In 2020, however, the company saw an increase of 60% compared with 2019 revenue, which Johnston attributes to the hiring of a business coach.

The firm could be on track to meet or exceed that total revenue this year, he adds.

Since its founding, the firm has grown to five employees and on average handles 15 projects at any given time. Some projects last a few weeks, while others can last upward of a year, or are constantly building on themselves, he says.

A slew of different industries contract with the firm, ranging from aerospace and electric vehicle projects to sporting goods.

One such company currently engaging Johnston’s engineering expertise is CarbonQuest, which is working to develop a carbon capture system to reduce CO2 emissions from buildings and recycle it for use in other products. The company has locations in Spokane, Seattle, and New York City.

Johnston says such green projects are important to him because of benefits they could have on the environment.

“I don’t think that climate change should be a political issue,” he contends. “We have observational data and we need to do something about it. … I can go and work on the design of those big impact things.”

Johnston also put together a team to design and build the first functional prototype of the xCold system, a mobile refrigeration system that runs entirely on solar power that was developed by SolarXWorks LLC, of Moses Lake, Washington.

Additionally, Johnston says he is in the process of quoting manufacturing services for a specialized gurney lift for hospital helicopter transport. Dubbed the HAA Backsaver, the device helps to reduce medical staff injuries by lifting patients onto or off of a helicopter air ambulance without putting undue strain on medical workers’ bodies.

The device was thought up by a Spokane-based pilot who contracted with Johnston’s engineering firm to develop the product. Johnston bought the rights to take the product to market, and the inventor collects royalties from every sale, he says.

Most of Johnston Engineering’s work comes from companies in the Spokane-Coeur d’Alene area, though the firm typically has at least two projects from companies outside the area, says Johnston.

His clientele breaks down into three categories: clients that require supplemental engineering analysis for a project; clients that need the firm to take on the brunt of the project, from design to market; and entrepreneurs who want to take a product to the masses.

Johnston Engineering was founded in 2016 after Parker Aerospace shuttered its Liberty Lake operations, says Johnston, who had worked for the company for nearly six years.

When faced with a relocation to Ohio in order to remain with Parker, Johnston says he instead elected to start his own firm.

“I want to be responsible for all the successes and failures,” he says. “The buck stops with me.”

Johnston also is active in engineering education in the Spokane region and says he’s invested in expanding engineering opportunities in the area. He works as an adjunct professor at Gonzaga University and is on the board for the Eastern Washington University mechanical engineering program.

“We don’t have a graduate mechanical engineering program here ... we have to do things to make that happen,” he says.

Such programs likely would draw more technical businesses to the region, which would create high-paying jobs, he contends.