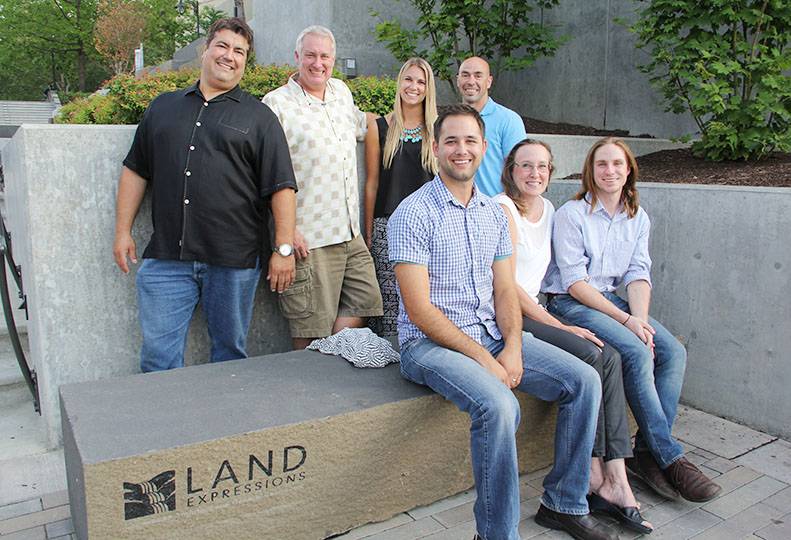 Dave Nelson leads the way up to a waterfall located in front of his office off of Day Mt. Spokane Road. He points out how the design of the waterfall and water flow in turn changes the sound the water makes as it cascades down over the rocks, dropping into a deep pool before spilling further down into a large Koi sanctuary below.

“Listen,” Nelson says. “This deep drop off deepens the sound.”

As he continues to climb the steps beside the waterfall, he focuses on how the design of the water feature shifts the sound at each change in the arrangement of the rocks, how the water gurgles and gets quieter the farther up he climbs.

Nelson, co-owner of Mead-based Land Expressions, a landscape architecture business he started with his wife Kerry Nelson in 1987, says he and the company’s designers use sound to mute undesirable noise, as well as soothe the soul, on projects they build. Changing the height, flow, or the surface of the rocks can create desirable sounds screening traffic noise or other intrusive sounds.

Land Expressions employs 13 full-time landscape architects and designers, in its Spokane office located at 5615 E. Day Mt. Spokane Road in Mead, and another 30 to 40 people who work in the field in an on-site nursery and landscape area or as craftsmen and construction managers.

Nelson says the company uses site design and the integration of art and science to create and build water features and applies that mindset on its construction projects.

“We embrace sustainability and responsible design. Our award-winning team of landscape architects specializes in the design (and construction) of aquatic environments, aesthetic water amenities, and restoration projects,” he says. The company does a lot of work at health care facilities and corporate campuses, and also stays busy with commercial, retail, and residential projects, he says.

Nelson grew up in Spokane around the landscape business. His father, Duane Nelson, owned Nelson Landscape for many years, a company that helped build Riverfront Park and improve Canada Island during Expo ’74, he says. The elder Nelson received several national awards for beautification of Northwest highways and parks as the owner of Nelson Landscape.

Dave Nelson is building on that legacy here with projects such as the Spokane City Plaza and Huntington Park, which was a joint project of Avista Corp. and the city of Spokane. Avista paid to develop and build the plaza and park on land the city owns near City Hall and gifted it to the city. Land Expressions was the landscape architect and lead contractor on the project. Nelson says it was necessary to remove a parking lot behind City Hall to make that area a connecting point between Riverfront Park and Huntington Park on the Spokane River.

The park includes a pair of waterfall fountains, a fire feature sculpture, a scenic overlook for both able and disabled visitors, more than three acres of green space, and a series of levels connected by steps, leading down to a close-up view of the falls. The overall effect is modern and very geometric, he says.

When Avista asked him to do the project, Nelson says he welcomed the chance to work on what his father worked on many years ago. The park and plaza should have taken 36 to 42 months to complete, he says, but Land Expressions finished the work in 13 months to have it ready for Avista’s 125th anniversary celebration in April of this year.

“It was a challenge,” Nelson says.

He says his crew was still designing the top of the plaza while other employees were starting to bulldoze the land at the bottom.

“One of my designers moved his mobile home here and didn’t leave here for 3 ½ weeks,” he says. “We were working 8 to midnight (during peak times) every night to get it done.”

“Our mission was to give more access to the river,” he says. “Physically and visually we wanted it to be more Seattle and ‘Portland-esque.’”

Nelson says there are 176 steps in the park from top to bottom and one of the goals was to make it seem like there weren’t that many steps to encourage people to make the journey down.

“The shading structures and lush green areas make the journey down there enjoyable,” he says, adding, “For those who choose not to make it down, or could not, we made great viewing platforms so they can definitely see the river. And feel the river.”

Ultimately the project included the removal and disposal of 2,000 cubic yards of contaminated material, Nelson says, which the design team didn’t initially recognize. “Originally we thought we would take the dirt from down below and use it up top,” he says.

The company soon found out that tailings and debris from the August 1889 fire, that destroyed the city’s downtown commercial district, long ago was sloughed off down into the planned park area, he says.

“So we basically were looking at getting rid of hazardous waste. We then had to change the design,” Nelson says.

He says the contamination issues offered designers the opportunity to change the design, terrace the plaza and reveal views of the river gorge. Post Street was narrowed, creating a safe mid-street crossing and renovation of the street landscaping incorporated rain gardens to cleanse storm run-off, he says.

Another challenge they had, he says, was to make sure people would use it.

“It is right next to River Park Square so Avista wanted to pull in people from there, Riverfront Park and downtown and City Hall people,” he says. “They wanted us to make it natural and create intimate areas and spaces.”

Another hurdle was the gondola passing right over the top of the park. He says noise both from the car traffic and the gondolas was muted out with the help of the water features.

“The setting was easy. But it was difficult. The river provided a great backdrop, but we had to get it so people could get to it and enjoy it,” Nelson says.

One of the easy parts was that Avista worked with the firm as a team and moved things along, he adds.

“Sometimes clients want to steer,” he says. “Avista let us create and the design was driven by them but they worked with us and after we heard their ideas, we would give them two or three designs.”

He says 3-D modeling and animation available today help make the design projects and working with clients much easier. “We can actually move people through the space on the computer,” he says.

Huntington Park is only one of a sizable number of completed local projects in Land Expressions’ portfolio.

Other recent examples varying types of work including the Spokane Teachers Credit Union headquarters in Liberty Lake, the Spokane Convention Center addition and surrounding landscape and the courtyards for the Pyrotek Corp. headquarters in downtown Spokane.

Land Expressions also rebuilt a pool and a naturalized, faux rock, 10-foot waterfall and slide for the Red Lion Inn at the Park in downtown Spokane as well, he says.

Although Nelson declines to discuss the company’s annual revenues, he says it didn’t see the effects of the recession until 2009-2010 because of the extended timeframe of its projects. Since then, the company has regrouped, he says.

“We made adjustments and changed some organizational things … management got a little leaner and meaner,” he says. “We looked at what projects we wanted to do. Not everyone can bid at the lowest price. Because we’re unique, we can’t bid on everything, and we made adjustments for that. And we did some rebranding and marketing.”

Nelson says the company specializes in coming up with innovative and creative approaches to challenging projects. People come to him with ideas and say they want this or that, he says, “and then we figure out how to do the design and build it.”

He says, “We get challenging projects like this guy in Canada who wanted us to create a pond on top of an island where he lives. We like unique challenges.”

Nelson says all designs are specific to each project.

“It’s all unique,” he says. “We have professionals in the construction end, and it’s a great group of people who are great craftsman coming up with the reality of what people want.”

Overall though, he says, the company has to remain competitive, although it doesn’t face much competition here in Spokane.

“There is not so much competition locally. Especially for the water features,” he says. “There aren’t a lot of people here who do the big stuff – the hydraulic engineering stuff—we’re probably the biggest in the Pacific Northwest north of San Francisco. We’re very knowledgeable in that.”

Nelson says many of his employees have been with him 10 years or more. Kathy Swehla, one of the company’s foremost designers, has been a cornerstone at Land Expressions since 1987, he says.

“She has a lead role in the residential sector and is a strong creative design force for public works projects, such as parks and plazas, commercial buildings, and private developments,” he says.

The company’s office location near Greenbluff and the site’s distinctive landscaping make it a place where employees like to come, he says.

“It’s so peaceful … and it’s a dog-friendly office. People bring their dogs to work with them,” he says.

Nelson says the company currently is working on several projects outside of the Spokane area, such as creating a 7-acre lake near a private residence with a large waterfall in Idaho, as well as a water feature for a new Whole Foods Market store in west Seattle.

This year it also finished a downtown core revitalization project of a Children’s Fountain at the Gresham Arts Plaza, in Gresham, Ore.

Land Expressions is licensed to work in several states, and Nelson says the company has a footprint in 17 states. It has built large water features as far away as Sendai City, Japan, of which he’s proud.

“We had to design the water feature around seismic issues, and I thought it was a moot point,” he says. “It turns out the tsunami was 20 miles away from the epicenter and the water feature made it through that with no problems at all,” he says referring to the 2011 earthquake off the Pacific coast of Tohoku.

Nelson says in the future the company hopes to be part of the changes in Riverfront Park.

“My dad (helped build) Riverfront Park,” he says. “We would like to be a part of it on the second go-round.”

He says his father, for the most part, built all of Riverfront Park after Expo ’74 structures and improvements were removed or taken down.  “Some of the trees we had to remove… were actually trees I planted in the summer when I worked for him,” he says.

“I wish he could see Huntington Park now. I know he’d be proud of what our team did and put together. He actually did the work on Huntington when it was more natural.”