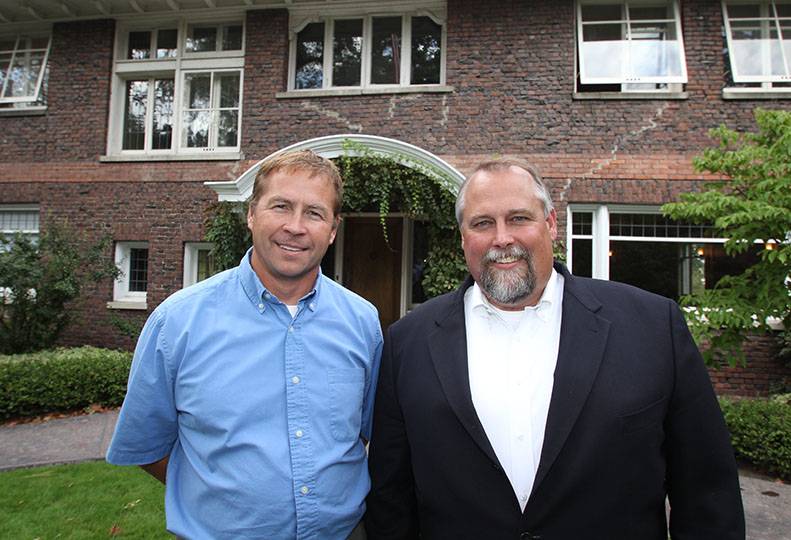 The law firm is located in the historic Corbet-Aspray House, at 820 W. Seventh, having moved there in March from leased space in the Symons Block, at 7 S. Howard.

"We were in a downtown office building, and we were looking for something different," Campbell says. "We're a unique practice, and we wanted something unique to us."

Campbell and Bissell have hired a number of its own clients to convert the structure into law offices, while maintaining its historic design.

Their practice concentrates on com-mercial litigation and has a client list of predominantly construction and real estate concerns, which the partners prefer not to identify.

"Construction law is our bread and butter," Bissell says, adding that the firm also provides other legal advice and services to its construction clients.

Among its clients, the firm represents general contractors, subcontractors, and suppliers.

"Our clients could build a building, construct the roads to it, and bring in the utilities," Bissell says.

Construction law, however, isn't all the firm handles.

"The commercial litigation side is growing," Campbell says.

Bissell adds that, "Noncompete covenants to protect proprietary information are all the rage."

Campbell and Bissell are the partners in the firm, which also has five associates, an of-counsel attorney, and a support staff of three.

The two men first met at the University of Idaho, where they were roommates, both enrolled in ROTC. So it's no coincidence that they were both Marines after college—Campbell was stationed in Hawaii and Bissell in Southern California.

It's more of a coincidence that both went into law after their service.

Bissell graduated in 1994 from the University of Washington School of Law, in Seattle, while Campbell earned his law degree here at Gonzaga University that same year.

Straight out of law school, Campbell began working in construction law here at Dunn & Black PS—now Dunn, Black & Roberts PS—and Bissell joined the firm in 1997 after practicing law a few years on the West Side.

When Campbell and Bissell left Dunn & Black to start their own practice in 2005 they had built up a reputation in construction law, and they say that many clients they had worked with stayed with them.

The firm's revenue has grown every year since then, although it was nearly flat in 2010, compared with the year earlier, they say.

"Sometimes all of our disputes are local," Campbell says. "It seems the last two years I've been in Montana and Idaho quite a bit."

When they decided early this year to look for a place with room to grow, they envisioned building a new structure. That didn't pencil out, however, and an architect they knew suggested the 8,200-square-foot Corbet-Aspray House as a possible option, Campbell says.

"We looked into it, and we jumped into it right away," he says. "It was vacant and tired, but not too bad."

The 1908 mansion was designed by renowned architect Kirtland K. Cutter and built for James Corbet, a prominent lawyer and banker. It was later owned by Dr. Melvin Aspray, one of Spokane's first physicians to specialize in radiology. Former owners Shawn Nichols and Anne Marie Byrd, who operated Hannah's Garden Inn, a bed-and-breakfast concern there, nominated the Corbet-Aspray House for listing on both the National Register of Historic Places and the Spokane Historic Register in 1999.

Before buying the property, Campbell and Bissell turned to some of the firm's clients to inspect the structure and advise them on how to accomplish their vision.

The building was structurally sound, and the exterior was in good shape cosmetically, but the interior still needed quite a bit of work to convert it into an office building while maintaining its historic character, Campbell says.

The partners formed Cambiss Ventures LLC, which closed the real estate transaction in less than 30 days. Then they hired subcontractors from among their clients to restore and renovate the mansion.

"We had to be out of the old office on Feb. 28, and we've had contractors in here since the day we moved in," Bissell says.

They bought the house for $450,000, and by the time they finish renovating the basement and remodeling much of the interior, they'll have likely invested another $200,000 into the property, he says.

"We had to do a lot of wiring and plumbing, and we redid the heating," Campbell says.

The owners also gutted the basement and installed a new drainage system. The basement is still undergoing an extensive renovation, which will include constructing office partitioning walls and leaving as much of the original brick exposed in the interior as possible.

Much of the remainder of the building retains its original charm, including crown molding in every room, a servant's stairway, and a phone nook.

The attorneys' offices are located in five former bedrooms on the second floor.

The dining room on the north side of the main floor now serves as a conference room. The original living room, which now is an open receiving area, opens to a sun porch at the northeast corner of the main floor.

Campbell and Bissell are looking for tenants to occupy portions of the basement and third floor, and a caterer already is leasing a commercial kitchen that was installed by previous owners of the mansion.

Even as a multitenant office building, the mansion has room for the firm to expand, Campbell says.

"We're eyeing growth as needed to serve our clients rather than growth for its own sake," he says. "If we get a couple more big clients and big cases, we'll need to add more lawyers. This building gives us the flexibility to do that."

Sometimes a few big cases can settle within the same week, Bissell says. "Holes in our schedules always seem to get filled," he says. "We're always trying to attract more clients, but we're pretty busy."

Campbell adds, "I've been in construction-law practice almost 20 years and it's never been slow. If you take care of clients, you always have work to do."

Even in the depths of the recession, the practice had plenty of work, he says.

"It's just a different type of busy," Campbell says.

When times are good and a lot of projects are being bid, clients often are more willing to negotiate disputes rather than file lawsuits, he says.

"When the economy is down, they drag their heels, and aren't willing to negotiate as much," Campbell says. That's when cases are more likely to go to court.

"We like trial work and consider ourselves good at it," Campbell says. Often, though, it's in the client's interest to negotiate disputes without going to trial, he says.

"We like to think we do our best work keeping our clients out of court," he adds.

Bissell says, "We like to resolve cases the best we can as quickly as we can. We want our clients to be as successful and pay as little as possible. That keeps them coming back."

Campbell says it's been an adventure maintaining a practice the middle of a construction project.

"It's a fun place to come to work," he says. "It has a much better feel to it than an office building."