Subdivision would include 281 homes 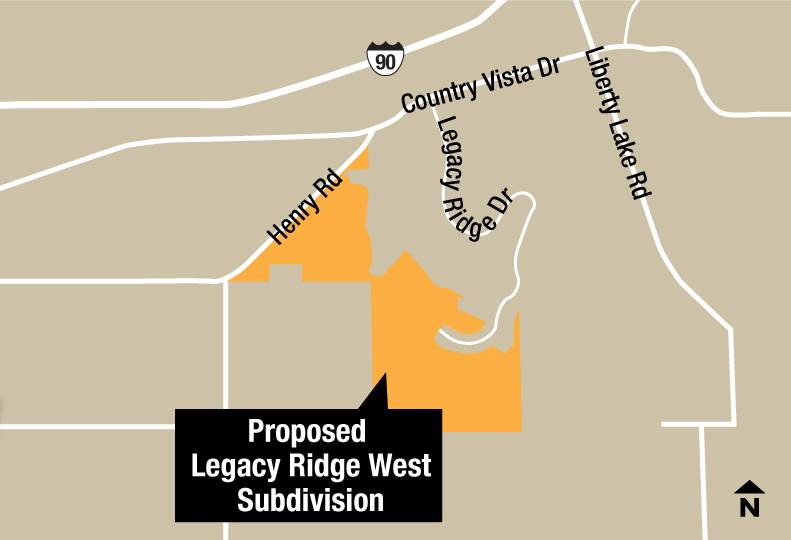 A Vancouver, Wash.-based real estate investment group says it plans to develop up to 281 residential lots in a subdivision in the western part of the Legacy Ridge development.

The proposed Legacy Ridge West subdivision would be the largest single subdivision proposed in Liberty Lake since the Great Recession, likely eclipsing in potential value the $45 million-plus, 225 single-family home River Crossing North subdivision being developed by an affiliate of Greenstone Corp., of Liberty Lake.

Legacy Ridge West would be immediately west of the Legacy Ridge 3rd Addition, also known as Parkside at Legacy Ridge, which Copper Basin Construction Inc., of Hayden, is developing.

Holt has developed commercial, residential, and multifamily projects throughout the Pacific Northwest and California.

Although Holt’s construction arm acts as its own contractor for some of the company’s developments in the Vancouver-Portland area, Tuttle says the company intends to finish the Legacy Ridge lots and sell them to homebuilders.

“I expect local builders to be buying the lots,” he says.

The target market will be middle- to upper-income homebuyers, and about 700 people would reside in the completed subdivision, Tuttle says.

Home values likely would be comparable to other homes in the overall Legacy Ridge development, he says.

Asking prices for single-family homes there range from about $224,500 for a home with 1,700 square feet of living space, to $1.75 million for a 6,400-square-foot home, according to the Spokane Association of Realtors Multiple Listing Service and a number of Spokane-area realty and homebuilder websites.

The application also will be scheduled for a public hearing before a hearing examiner, who will forward a recommendation to the Liberty Lake City Council for a final decision, Tainio says.

Tuttle says Holt expects to complete final engineering and construction drawings for the lots this winter.

“Our goal is to have a phase ready to start construction in the spring of 2015,” Tuttle says.

Spokane-based Taylor Engineering Inc. is designing improvements for the lots.

Tuttle says Holt likely will hire out the infrastructure work.

A preliminary plat map shows Legacy Ridge West would be developed in three phases, although the project description accompanying the map also says the number and scope of phases ultimately would depend on market conditions.

“There are portions that would have much higher value, and we might not develop them for a while until the recovery in the market continues,” Tuttle says.

Most of the lots for 173 detached single-family homes would range in size from 6,000 to 9,000 square feet, although some much larger lots would range up to 4.8 acres, the application says.

The development also would include up to 108 townhome lots measuring 2,700 square feet in size.

Additional access to the townhomes, which would be located on the westernmost 13 acres of the subdivision, also would connect to Henry, outside of the gated access to the rest of the Legacy Ridge development.

Three previous owners had designed the project site, with the most recent being former Coeur d’Alene developer Marshall Chesrown, who had envisioned the overall Legacy Ridge development with 500 homes on 640 acres of land.

Chesrown’s development company, Black Rock, had constructed some of the infrastructure for the proposed Legacy Ridge West site, including individual sewer and water services, to many of the proposed lots and much of the roadbed for Valley Vista Drive.

When the real estate market collapsed during the Great Recession, Chesrown turned over portions of the Legacy Ridge development to creditors in lieu of foreclosure.