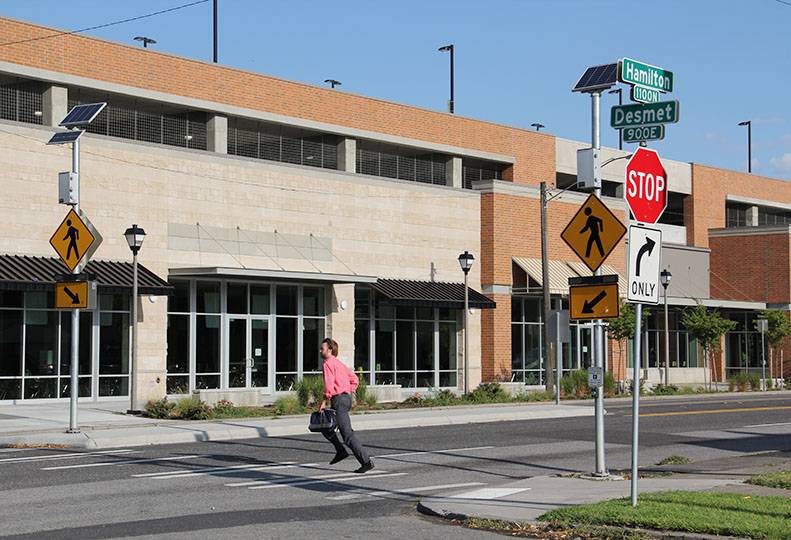 -—Mike McLean
The intersection of Hamilton Street and Desmet Avenue is located at the south end of the half-mile stretch of Hamilton proposed for a change to pedestrian-friendly, higher-density zoning. Changes could be in front of the Spokane City Council this fall. 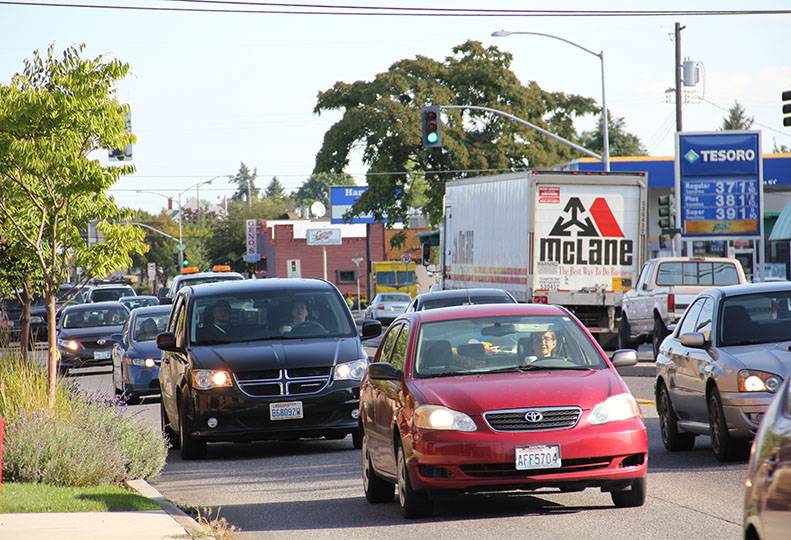 -—Mike McLean
Hamilton Street is expected to remain a four- to five-lane arterial, although the idea of narrowing it to three lanes could be revisited if the North Spokane Corridor is completed.

The city of Spokane is airing proposed new land use regulations designed to encourage a pedestrian-friendly, higher-density mix of residential and commercial uses within a stretch of the Hamilton Street corridor near Gonzaga University.

The area affected would be a half-mile section of the Hamilton corridor from Desmet Avenue on the south end to a half block north of Augusta Avenue on the north end.

A draft for the proposed Hamilton Form-Based Code currently is in the public comment phase through Sept. 24 when it will go before the Spokane Plan Commission, says Scott Chesney, the city’s director of planning services. If the commission recommends approval, the draft code would be forwarded to the City Council.

“I would expect City Council would be able to see it in October or November,” Chesney says.

“Form-based coding is not as concerned with actual use as the intensity of use and how it relates to streets and surrounding areas,” Chesney says. “It also implies a heavy pedestrian and bike influence and moves parking to the sides and backs of buildings.”

The proposed Hamilton Form-Based Code is the first attempt by a Spokane neighborhood to take the lead in crafting its own amendment to the city’s comprehensive land-use plan, he says.

“The Logan area is perfect for the form-based code because of its proximity of Gonzaga,” Chesney says. “The university’s strong economic presence will drive continued demand for strong retail and residential growth.”

The code would set maximum and minimum building heights along Hamilton.

New buildings with street frontage in the 1∏-block stretch of Hamilton from the south side of Augusta Avenue to a half-block south of Mission, would be required to be four to six stories tall.

That area includes the full block occupied by a Safeway supermarket at 933 E. Mission.

It also includes the new McDonald’s restaurant site, where the hamburger chain built a drive-thru facility over objections from Logan residents and people working on the Hamilton Form-Based Code.

New buildings at the four quarter-blocks at the intersection of Hamilton and Sharp Avenue would have to be three to five stories tall.

New buildings fronting Hamilton within the rest of the code area would be required to be three to five stories tall.

Some peripheral properties immediately east of Cincinnati Street and west of Columbus Street would be included in the middle and north end of the code area, as well as the entire block on the west side of Cincinnati between Mission and Augusta, although the peripheral properties wouldn’t have height restrictions on  structures with street frontage.

“The Logan neighborhood council and planning group have been supportive and wanting it to move faster,” he says. “Now we’re meeting with business owners and property owners for a final consensus. If we have consensus, then we’re ready to move forward.”

The team, which has had about 50 revolving members, started working on the proposed code two years ago. Using a $21,000 allocation from the city, it hired Spokane planning consulting Studio Cascade Inc. to help guide it through the process.

“The benefit is that it gives developers predictability,” she says.

“The only real concern I’ve heard is over height minimums,” she says. “We’re looking at adjusting those.”

Chesney says the code would allow some flexibility for the planning and zoning department if economic conditions aren’t conducive to construct a four-story structure.

“If a sub-area calls for a four-story environment and developers say the market can’t afford that level of residential and retail now, we could find a way for the developer to build a project that has the capacity to carry something in the future,” Chesney says. “We’ll work with them to help structure project that meets their needs today.”

Conversely, he says, “If somebody says they can hit that coded target, they will have a greased path to a permit.”

Businesses and structures within the code area would be grandfathered until they are redeveloped.

Hamilton Street also is likely to remain a four- to five-lane arterial for the time being, although the idea of narrowing the street might be revisited after the North Spokane Corridor is complete, Chesney says.

“The traffic counts on Hamilton make a three-lane difficult to do because of the need for north-south transportation,” he says. “Hamilton can’t change until there’s some north-south relief.”

At some point, he says, the city could try a pilot program changing the configuration of Hamilton with paint, restriping the street to have fewer lanes.

Chesney says form-based coding likely will be a tool that can be crafted to fit some other Spokane neighborhoods.

Some large cities, including Cincinnati and Miami, have adopted form-based coding citywide, he says.

“Where it has been done successfully, it has always been done with a grass-roots effort,” Chesney says.

Spokane Valley, for instance, scrapped a plan a few years ago that called for form-based zoning along a portion of the Sprague-Appleway couplet, due to opposition from some property owners, business owners, and commuters.

By contract, Byrd says the Hamilton Form-Based Code has support of residents.

“Logan is a wholly different environment,” Byrd says. “We have the highest pedestrian count outside of downtown. So many pedestrian trips are based on having Gonzaga University and being part of the University District designation.”