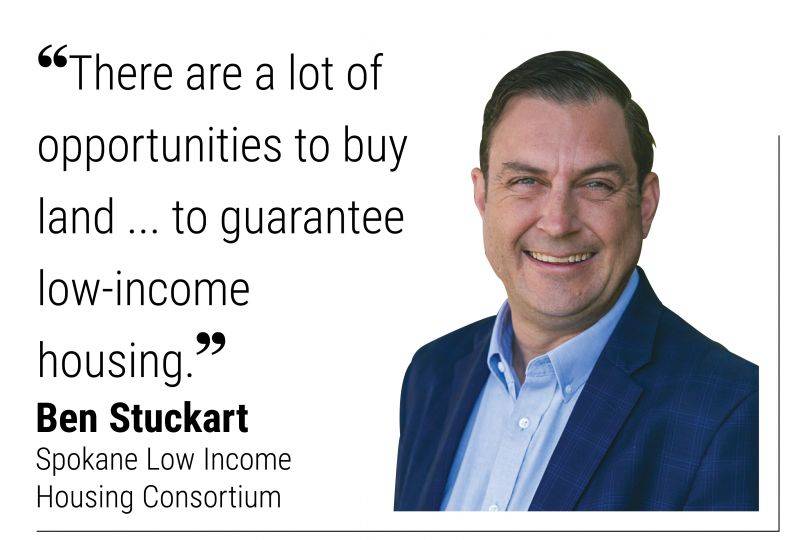 The Spokane Regional Low Income Housing Land Bank was created with a $45,000 grant from GoWest Foundation, which works with credit unions and community organizations in six Western states to expedite community-impact initiatives.

Lynn Heider, vice president of public affairs and communications for GoWest Credit Union Association, claims the land bank is the first of its kind in Washington state and will help create a stronger community in the Spokane area.

Heider says, “Our foundation typically gives grants to credit unions to support community impact work they’re already doing, or are committed to, or that they want to start, and helps to magnify the impact of what they have going.”

Spokane Teachers Credit Union and other local credit unions brought the initiative to GoWest Foundation for support, Heider says, adding that those credit unions have a stated mission to invest in the community, and the land bank initiative is a natural fit to help support those efforts.

STCU President and CEO Ezra Eckhardt says in a press release, “While there is no one solution to the challenges we face, the land bank is an important part of the puzzle.”

Heider says if credit unions can help people obtain affordable housing even for just one person at a time, it will start to make a difference in creating a stronger community.

“Credit unions work in their communities and assess what the needs are. You’ll often find their teams making charitable contributions and investing volunteer hours, but that is not all that they do,” Heider says.

Stuckart, the former Spokane City Council president, says a housing land bank operates as a neutral organization that works with financial institutions and government agencies to hold lots or vacant houses until they can be developed for low-income housing.

The Washington state Legislature pass-
ed legislation in 2018 that allows cities, counties, and state agencies to give away excess land for the purpose of low-income housing.

“The land bank, being a neutral depository for land, is an easy way for them to do that,” Stuckart says.

He adds that he’s hopeful the city and county see the value in the land bank and help support it financially.

The land bank will be operated by a board of five directors—independent of the housing consortium Stuckart leads—who will decide on which lots to purchase, evaluate the properties to ensure that the land meets the needs of the program, and determine which organization is best suited to develop the property when it becomes available, Stuckart says.

A search for board members is currently underway.

Stuckart says his goal is to raise $1 million by next summer for the land bank.

“I’m hoping within a year, we have a lot in our possession and that we’re deciding which development it should go to,” he says.

“That’s where the land bank is really important and vital, because right now, if I’m a nonprofit and want to build low-income housing, I
can only get state or federal financing…which is a barrier up front without a guarantee of any funding for their project,” Stuckart says.

There are over 400 houses in receivership in Spokane, including some impacted by drug activity, in addition to opportunities to acquire land currently held by the Washington state Department of Transportation for the North Spokane Corridor.

“Say they go and seize a drug house. The land bank can be the neutral party that receives the drug house so it can eventually become low-income housing,” Stuckart says.

If the developer isn’t ready in time, then the house is sold on the open market, limiting the low-income housing inventory.

The land bank will hold onto the property until financing is secured, allowing for a smoother transition than if the developer or nonprofit had to pay for the land upfront, says Stuckart.

The creation of the land bank also allows for smarter community development by conglomerating land and planning projects in areas that need low-income housing, he says.

Stuckart says there’s already interest from the community to support the land bank.

“I have three other developers around the city that have contacted me that would like their excess property to go to low-income housing,” he says. “There are a lot of opportunities, if we raise money, to buy land for very cheap to guarantee low-income housing.”