Developer to break ground in June, finish in Q1 2021 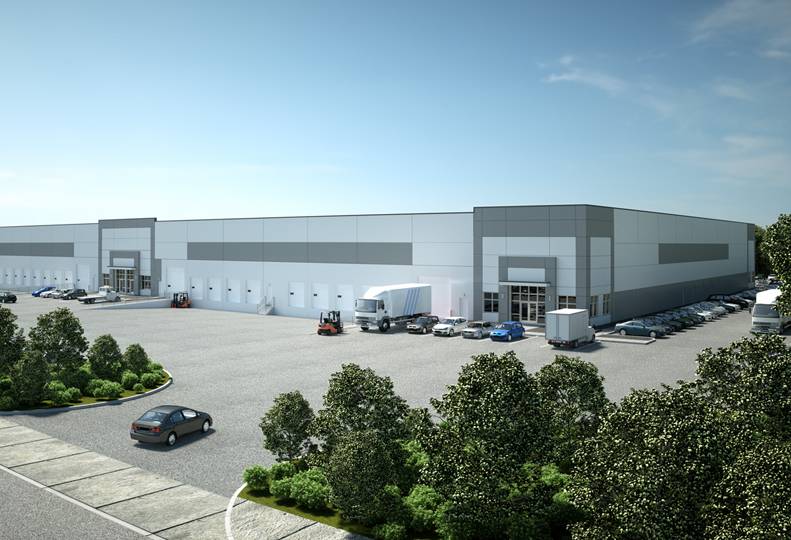 -Architectual Ventures
The first building in the McFarlane Industrial Park is expected to be a 187,000-square-foot structure that will accommodate up to 12 tenants.

Spokane Valley-based AT Acquisitions LLC is planning a 187,000-square-foot industrial building on the West Plains, says Aaron Lake, co-founder of the company, which does business as AT Industrial.

As envisioned, the building would be the first step toward developing a business park on the site, located at 12315 W. McFarlane Road, just west of the Spokane International Airport and just east of Exotic Metals Forming Co.

AT Industrial plans to break ground this month, and the building should be erected within seven or eight months, says Lake, who also is president of Seattle-based development company Leavitt Capital Cos., which has offices in the Spokane area.

The envisioned building will have the capacity to fit up to 12 tenants at 15,000 square feet apiece, or one single tenant if a company opts to lease the entire structure, he says.

AT Industrial is in the process of completing the purchase of the property where the West Plains building will be located, Lake says.

The land has the capacity to support an estimated 250,000 square feet of additional warehouse space, and the company plans to build more warehouses at the site in the future, Lake adds.

Lake says the project’s location within an opportunity zone was one of the draws of building on the West Plains. An opportunity zone provides tax benefits to investors who put capital from a qualified opportunity fund into designated distressed communities to foster economic development and job growth.

The opportunity zone also allowed the company to build the structure at a lower price than other developments in the region, according to a release from the company.

“It’s just fantastic that there’s this program that is encouraging people to create new businesses and specifically bring new business to areas that … need investment in infrastructure,” Lake says.

The project has been in the works for at least a year, he says.

“We originally designed a different project, mostly smaller buildings, and as we spent more and more time outside of Spokane—primarily in Sacramento, Boise, and Seattle—we got exposed to different types of buildings that had pretty compelling advantages,” he says, adding, “We developed what I think is an institutional quality project that we see in other markets as being pretty consistently the standard.”

The land is zoned for heavy-industrial use, but the project is being marketed primarily toward national and local e-commerce, logistics, and manufacturing companies, Lake says.

“COVID is having an enormous impact on the economy, obviously, and in particular on people’s shopping habits. So, folks are spending more time at home and shopping more online,” he contends. “As it stands right now as a community, but also as a country, we don’t have enough existing inventory to support the amount of growth that’s projected over the next few years in the e-commerce realm.”

The structure will feature double-sided loading in the facility, as well as excess land that companies can use for truck-and-trailer parking or outside storage, according to a press release provided by Spokane marketing company DH.

AT Industrial was founded in early 2019 by Lake and Tim Wolff, the former vice president of development with The Wolff Co. The company currently owns just over 700,000 square feet in industrial property in the Spokane area, including the recently completed 100,000-square-foot Montgomery Logistics Center, in Spokane Valley.