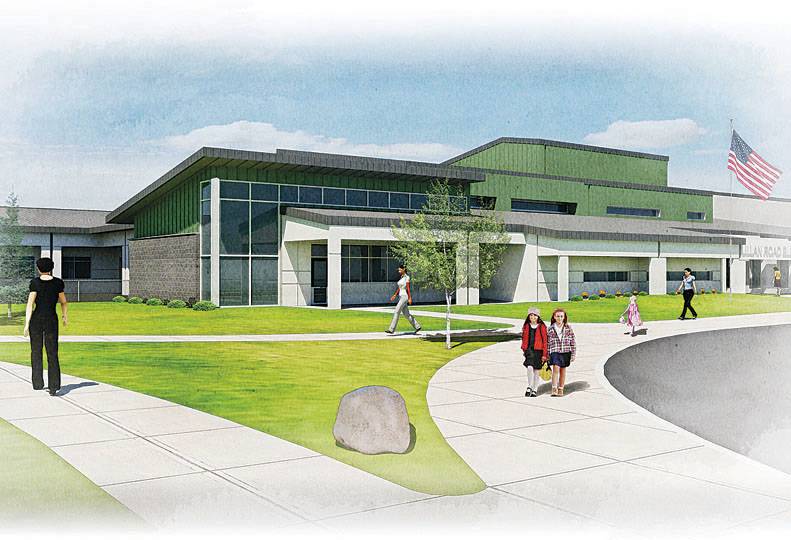 -—ALSC Architects PS
The Mullan Road Elementary renovation and addition project is expected to add about 6,000 square feet of floor space to the school building.

Greg Brown, the district’s director of capital improvements, says the project to update the school is expected to start this spring. The school is located at 2616 E. 63rd on the South Hill, west of Regal Street. Students will remain at the school during construction, which will be completed in phases, Brown says.

The district has estimated the construction cost at $11 million, and the work is scheduled to be finished by December 2015. The total project is budgeted at $17 million, including permit costs, architectural fees, equipment, and furniture.

The project will include demolition of an older portion of the school called the Comstock section, a 1950s-era school moved from the Comstock Park area to Mullan Road and opened there in 1977, Brown says. The project also will include constructing about 17,000 square feet of new space as well as renovating an addition constructed in 1981 that has just over 40,000 square feet of space.

Brown says the school currently has about 51,400 square feet of floor space, but the project will increase that to about 57,600 square feet.

With the upgrades, he says, the school will gain three additional classrooms, for a total of 25 classrooms to serve between 550 and 580 students.

He says WLK Joint Ventures currently is providing input on the project’s design as part of its construction-management role. WLK is expected to provide a guaranteed maximum price for construction later this month, and if the district agrees, the partnership will select subcontractors and move forward, Brown says.

The district is funding the upgrades with 2009 bond funding as well as from savings the district has realized after receiving lower-than-expected construction bids on other big capital projects as part of the bond measure.