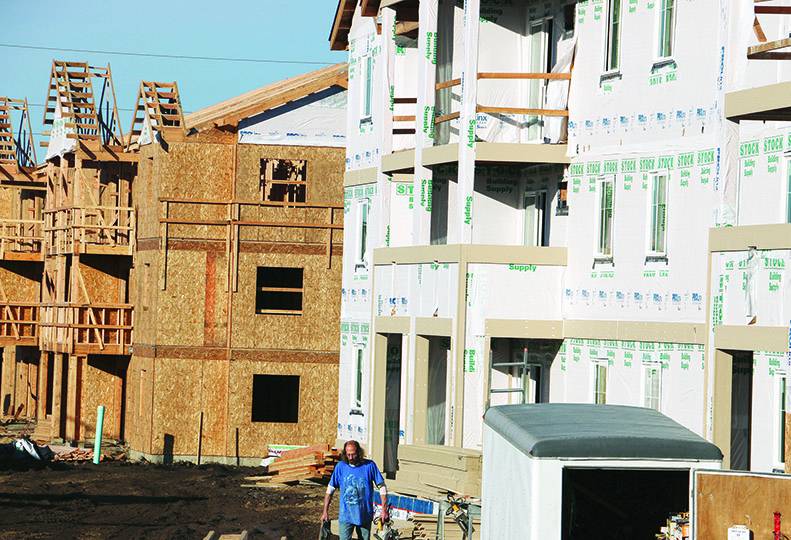 -—Mike McLean
Whitewater Creek Inc., the Hayden-based apartment developer, is making rapid progress on construction of the Summit Ridge apartment complex, on Spokane’s South Hill. The complex is expected to have 120 living units once it’s completed. 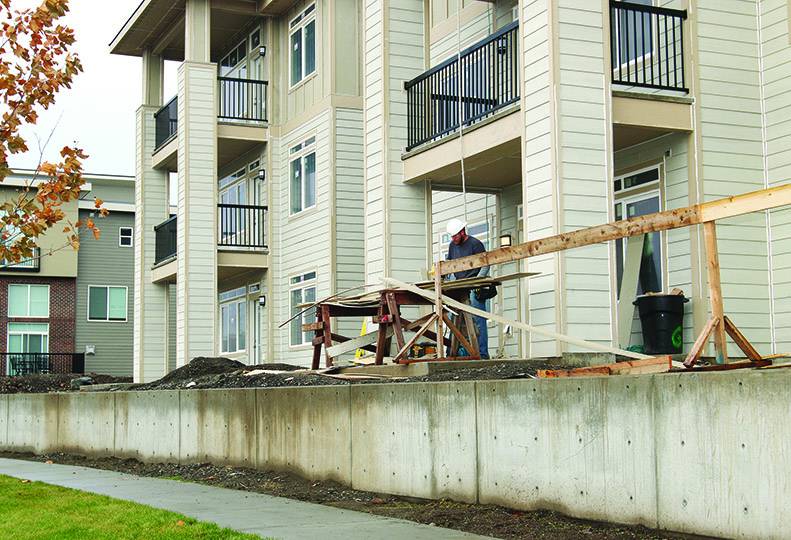 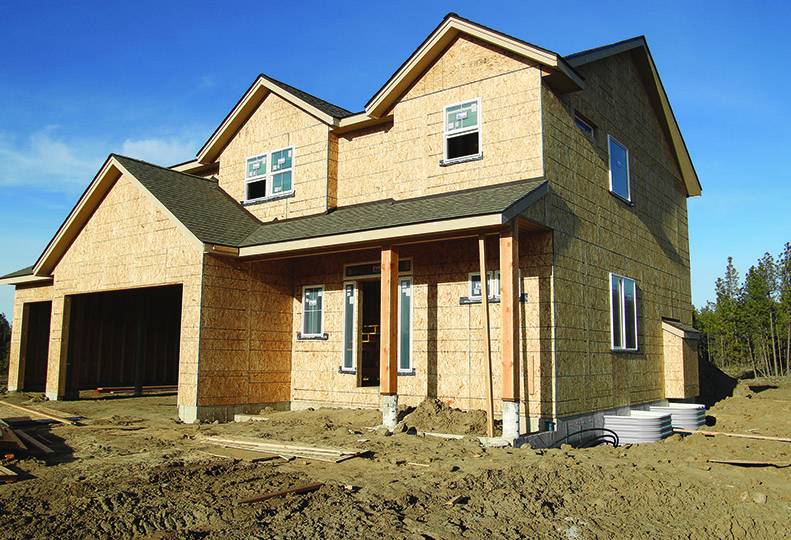 -—Mike McLean
Spokane-area homebuilders say demand for new homes, such as this once being built on Spokane’s North Side, has increased sharply since the start of the year. 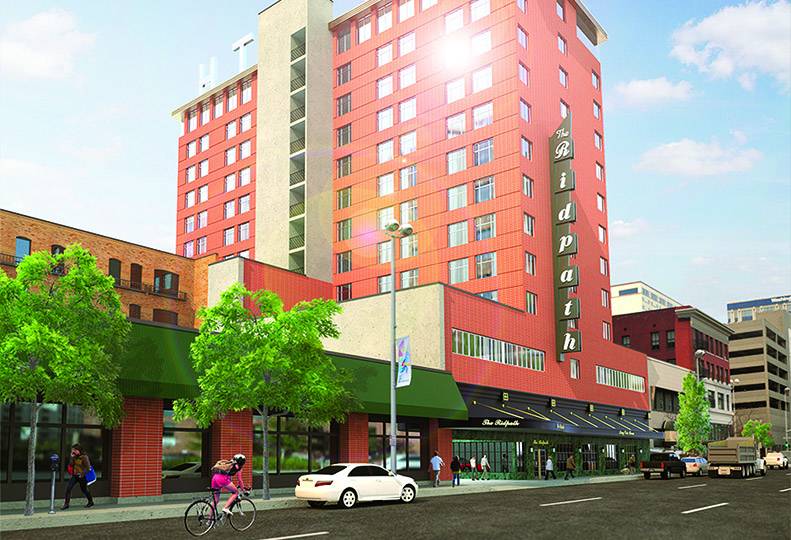 -—Wells & Co.
Wells & Co., of Spokane, is converting the long-vacant Ridpath Hotel into the Ridpath Club Apartments, with micro-units on most floors.

The overall residential construction market here is projected to be flat or show modest growth this year, but some builders are reporting surprisingly strong demand, particularly since the start of this year, raising hopes for a potentially sharper upturn during the coming spring and summer months.

The surge in activity follows what local market observers call a disappointing loss of momentum in 2014, when fewer building permits were issued for new home construction in the Spokane area than in the prior year, despite the rising trend in overall home sales during the last few years.

The multifamily construction market should be healthy through the rest of this year, though, judging by sharp increases last year in the number and value of permits issued for new apartment projects.

“There is a price challenge for new construction to compete with existing inventory,” says Joel White, executive officer for the Spokane Home Builders Association, adding, “A lot of people are moving into rentals versus ownership.”

As for the decline in permit activity last year, he says, “There’s many speculative theories as to why that’s happening. Local job creation is not as strong as in other markets.”

The sort-of-brighter side of the market, White says, is that with a lot fewer builders here now than before the recession, the builders who survived are staying quite busy.

The number of building permits issued last year for single-family homes here was probably at least 30 percent below what would be considered a normal year here historically, he says, and, “Everything I’m hearing is we should be pretty similar to last year. That’s what the expectation is.”

Based on a recent surge in prospective and signed buyers, though, some of the home builders and developers interviewed were considerably more bullish than White about the projected activity level this year.

“I haven’t had a spring like this since 2006. It’s just out of hand. Every week we’re picking up another four or five potential customers. We’re working with a dozen viable customers right now trying to put deals together,” Condron says, adding, “For this kind of activity at the end of February, this is telling me it’s just flat going to break open in March to May.”

One of the developments where the company is seeing a lot of activity is the gated community of Wandermere Heights, on the west side of U.S. 395 north of Spokane. Condron says it also will begin building homes this summer in a new 31-lot gated neighborhood called Pine Ridge that will be located north of the Wandermere area and in which he is a co-developer. That development will be located east of U.S. 395, near Hatch Road, on a wooded site just east of the Ridge at Midway, 180-unit apartment complex that was developed several years ago, at 16320 N. Hatch Road.

Scott Krajack, an executive with Viking Construction, says, “Our January was kind of flat, but then we just lit on fire in the last three weeks. We have 40 sales so far in February, which is ridiculous.”

Of anticipated home sales this year compared with last year, Krajack says, “I would expect it to be equal to maybe a little stronger.”

Joe Frank, president of Greenstone Corp., parent company for Greenstone Homes, says he expects that company to construct and sell 200 to 220 new homes here this year, which would be up from 176 homes sold last year and on par with the 213 it sold the prior year.

Greenstone ended last year with a strong sales surge, Frank says, adding, and “The first quarter of this year has been really strong as well. I’m not sure if that’s the trend.”

He says Greenstone has projected 231 new-home sales for this year, and “basically right now we’re right on projections,” but the company’s projections sometimes tend to be a little aggressive.

Of the new single-family housing market here generally, he says, “Our perspective all along is that it’s been getting better, but it’s a slow rise.”

Greenstone Corp. develops various types of projects, including residential. It currently has single-family home projects progressing at a number of locations, including Eagle Ridge, Rock Hill, River District and Ponderosa Ridge in Spokane County and Montrose in Post Falls and Coeur d’Alene in Kootenai County.

It also recently bought 25 lots in the Morningside Heights development in Spokane Valley, its first Valley project in quite some time, with another 27 lots there available for later development, Frank says.

“That will be interesting for us to be back in that market. We’re pretty excited about it,” he says.

One of the company’s most attention-getting project sites continues to be the 78-acre Kendall Yards mixed-use development along the Spokane River, northwest of downtown.

Greenstone is beginning work on a fifth addition of around 50 townhome units between Summit Parkway and Bridge Avenue west of Nettleton Street that will include more units with master bedrooms on the main floor, rather than the upper floor, Frank says. That shift is intended partly to compensate for the elimination of a lot of earlier envisioned single-family home lots in the development, he says.

The company also has a condominium building in the works, although details of that project haven’t been finalized yet, he says. He adds, though, that—also to compensate for the loss of single-family lots there—the condo building will include single-floor living units and will be served by an elevator.

Separately there, Greenstone expects to wrap up construction in March on the 50-unit Highline West Apartments complex, Frank says.

The project site is west of Maple Street, where Maple runs under Summit Parkway north of the Spokane River. Summit is the main east-west boulevard through the Kendall Yards development. Ponderosa Ridge Homes LLC, a Greenstone construction affiliate, is the contractor on the Highline West project, and Greenstone designed it.

More visible from downtown and from the Monroe Street arterial is a three-story, mixed-use building that North Gorge Commercial Partners LLC, an affiliate of Greenstone, is constructing just east of the similarly sized Highline Lofts building in Kendall Yards.

The 27,000-square-foot structure, which is expected to be completed in July, is located at 1104 Summit Parkway and will have 9,000 square feet of commercial space on the ground floor and a total of 24 apartment units on the second and third floors.

The building size is roughly the same as Highline Lofts, which has ground floor commercial space for up to six tenants and 24 second- and third-floor, one-bedroom and studio apartments. Commercial tenants there include Brain Freeze Creamery.

Greenstone CEO Jim Frank had told the Journal earlier that the construction value for Highline Lofts was $3 million.

Developer Newland Communities Inc. this month will be bringing onto the market another 80 lots at Eagle Ridge, the big residential subdivision in southwest Spokane, says Lori Henriksen, vice president of operations here for the company.

“We’ve had a very busy first quarter as all of the nation has,” she says. “We saw a good burst of energy in January last year, but we’re tracking 50 percent higher in sales year to date.”

The current surge in sales activity, though likely to ease off some, “certainly gives us some optimism that we’re going to see some slow, steady growth. The last several years have taught us to be cautious with our optimism,” Henriksen says. She adds, though, that, “Seventeen sales out of the gate (between Jan. 1 and Feb. 22) is a good sign.”

The 80 lots that are to be added shortly will be a continuation of Eagle Ridge’s 10th addition, which Newland started last year with the completion of 47 lots, Henriksen says. The new lots are being added on the south side of Eagle Ridge Boulevard, “where all of our future growth is,” she says.

Eagle Ridge Boulevard is the main access road into the development and runs all of the way through it on a winding, mostly east-west alignment.

“We’ll have two more additions on the south side,” with each addition including roughly 100 lots, Henriksen says.

Newland Communities is continuing to work with the same four featured builders at Eagle Ridge, which include Hayden Homes, Greenstone, Paras Homes, and Morse Western Homes LLC, of Liberty Lake. Hayden Homes joined the roster of homebuilders there in the fall of 2013, bringing an entry-level line of homes into the largely upscale community.

As part of the latest phase of work at Eagle Ridge, Newland Communities is developing a 5-acre park that’s expected to be completed by November and will be located on the southeast side of the 10th addition, Henriksen says.

“We’re building it two years ahead of schedule,” she says.

The development also includes a 6-acre park on its north side.

The new park will include an amphitheater, a tree fort village, a cluster of gazebos for community gatherings, game playing areas, and an art trail loop, Henriksen says.

“We’ll have some play features. We’re going to keep everything as close to nature as possible—a very whimsical, innovative park,” she says.

Taylor Engineering Inc. and Clearwater Summit Group Inc., both of Spokane, are working with Newland Communities on that project, she says.

Eagle Ridge is a 554-acre development located west of U.S. 195 and about four miles south of the Interstate 90 junction. The subdivision now has nearly 800 occupied homes, and Newland Communities has said it expects to reach the roughly 1,100-lot, build-out completion of the development in the next year or two.

Separately, as the Journal reported last fall, a Vancouver, Wash.-based real estate investment group plans to develop to 281 residential lots in a subdivision in the western part of the Legacy Ridge development at Liberty Lake.

Legacy Ridge West would be developed on 199 acres of land owned by Holt Opportunity Fund 2013 LP, of Vancouver, says Rian Tuttle, construction manager for an affiliated development company, the Holt Group. It would be immediately west of the Legacy Ridge 3rd Addition, also known as Parkside at Legacy Ridge, which Copper Basin Construction is developing.

Holt has developed residential and commercial projects throughout the Pacific Northwest and California.

Multifamily-housing construction activity remains strong here, with a number of sizable projects planned or under way around the Spokane area.

In one of those projects, Hayden-based developer and contractor Whitewater Creek Inc. is constructing of the first of two $16 million affordable housing projects it has planned on the South Hill.

The 120-unit Summit Ridge Apartments complex will be located on a 5.6 acre parcel of land at 3307 E. 55th, a block outside of the south Spokane city limits, county building permit information showed. ZBA Architecture PS, of Spokane, designed the project.

Whitewater Creek also has obtained foundation permits to begin construction on a similar 120-unit apartment complex that’s to be named Pine Rock and would be located on a 6-acre parcel at 3211 E. 55th, just west of the Summit Ridge project.