No-Li is brewing up an Old World-style beer hall 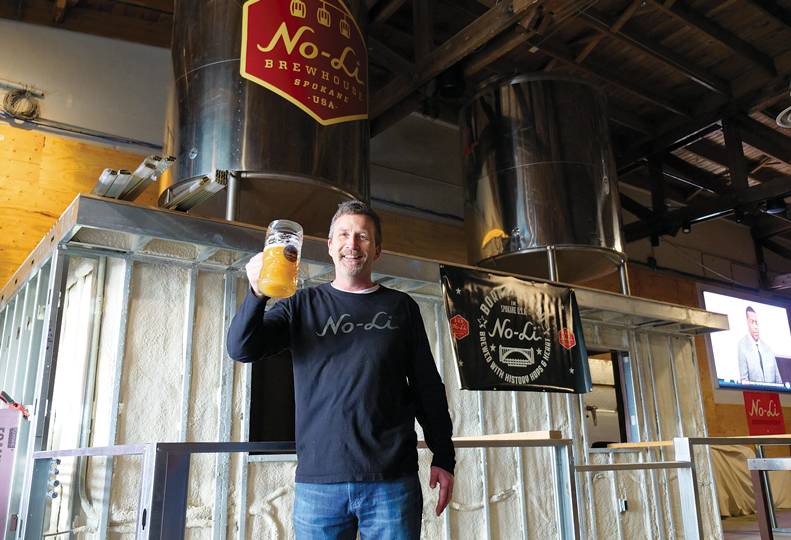 -Virginia Thomas
No-Li Brewery owner John Bryant says the new space is inspired by the traditional beer halls of Western Europe. He expects to open it fully by early May.

The owners of No-Li Brewery are expanding with a beer hall space in the former Dry Fly Distilling tasting room in the historic Riverwalk Building, at 1003 E. Trent.

No-Li Brewery owner John Bryant says the 4,200-square-foot beer hall, which will be fully open by early May, is inspired by the traditional beer halls of Western Europe, particularly the beer halls of Oktoberfest in Munich, Germany.

Bryant says the beer hall is expected to open fully by early May, though the space currently is open for overflow service starting at 3 p.m. on Fridays and from noon to 10 p.m. Saturdays.

The bar will feature 20 taps, including four guest taps, which will dispense beer made by other local breweries.

The former Dry Fly space was gutted to prepare for renovations, including exposing the wooden beams of the building's ceiling and creating a window between the No-Li pub space and the beer hall, Bryant says.

A large, 30-barrel tank has been refabricated into the entrance to the beer hall and will become No-Li's main entrance when the hall is completed, Bryant says.

"On top of the brand-new cooler and bar that's being built will be two 30-barrel stainless steel and copper serving tanks. It will feel very much like you're in a European brewery," Bryant says. "All the tall tables with tall chairs are being custom built by hand to feel a bit European, but modern—not stodgy or sleepy."

Large sheet metal chandeliers in the shape of each of the four Pacific Northwest states—Washington, Idaho, Montana, and Oregon—will hang over the space. A custom-built, 11 1/2-foot by 6 1/2-foot television will show games and important events, Bryant says. A 20-foot by 60-foot artificial turf area will offer some games, such as giant Jenga, for patrons to play while drinking.

About five employees will be hired to staff the beer hall, Bryant says. Customers will buy pints from a bar, rather than via servers taking orders.

The beer hall will offer snacks but will forego dining options.

Bryant says that he hopes the lack of substantial food options will cause customers to explore other Spokane establishments after a pint at the beer hall.

"We're not doing food because we want people to eat at other pubs and restaurants," Bryant says. "We need to enlarge Spokane's economic pie, and this is a step to adding a couple more wedges into the pie."

The beer hall will include a local merchandise area.

"We hope to feature stuff from all the big events and really cool things of Spokane, from Bloomsday to Hoopfest to the new USL soccer team to the Spokane Indians to the Spokane Chiefs," Bryant says. "We're working with all these organizations to do consignment, where they can feature their stuff here. It's a great way to bring recognition to (organizations) we work with."

When No-Li's beer hall is complete, it will follow the same hours of operation as No-Li's brewpub space—noon to 9 p.m. Sunday through Wednesday and noon to 10 p.m. Thursday through Saturday, Bryant says.