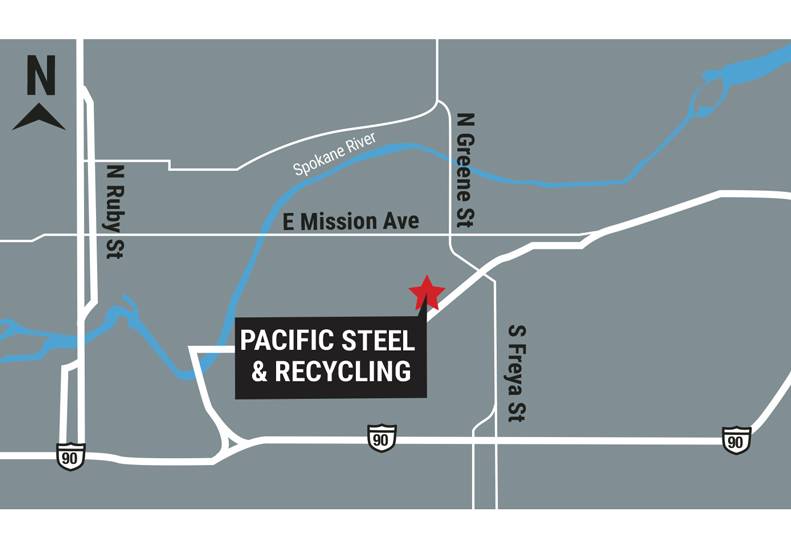 City of Spokane permit records show Hansen-Rice Inc., of Nampa, Idaho, has been selected as the contractor and the architect for the project.

Demolition of a 36,000-square-foot former retail building was completed at the site earlier this year, according to planning documents.

The projects include a 12,400-square-foot office building and a 25,700-square-foot baler building, both of which will be constructed with metal siding on land designated for light industrial uses. Site plans show a new asphalt parking lot, access road, and the relocation of an on-site rail spur to transport recycled metal products, will result in nearly 250,000 square feet of pavement at the site.

About 10,000 cubic yards of fill consisting of silty sand and gravel will be removed to grade the site in the build areas, environmental documents show.

A State Environmental Policy Act environmental checklist for the project shows additional proposed improvements include new landscaping and a tree buffer along the site boundary on North Regal Street.

Once construction is complete, the new facility will have about 25 employees working there with 54 parking spaces for employees and visitors, according to the checklist.

The facility is expected to generate about five heavy truck-trailer trips and about 25 other vehicle trips per day.

Pacific Steel’s existing facility, at 1114 N. Ralph, is in the path of the North Spokane Corridor freeway project, which is why the recycling company is relocating to the 15-acre site, located just north of the BNSF Railway Co. tracks along East Trent Avenue.

The new site is about half a mile west of the existing facility in the East Central neighborhood.