Some fundraising ongoing for $2.3 million building 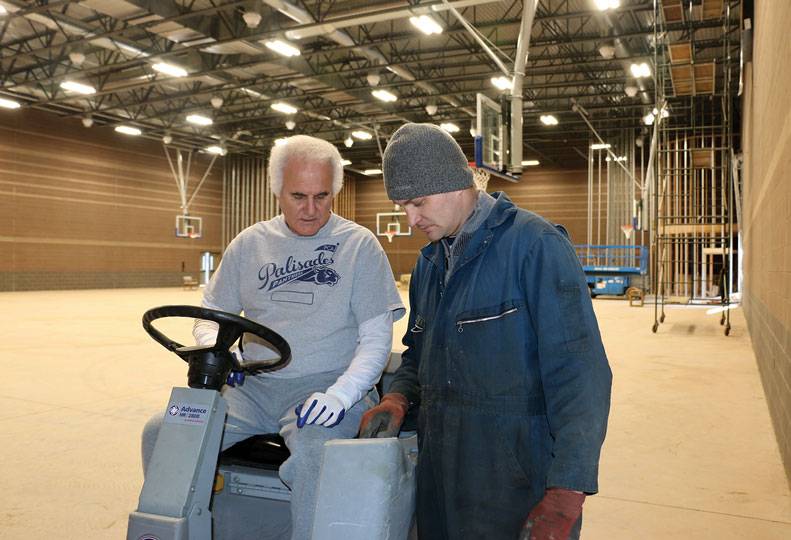 -Kevin Blocker
Paul Windemuth, left, gets a lesson from Victor Larkin on how to use the floor scrubber at the nearly completed multiuse facility at Palisades Christian Academy.

A representative of a west Spokane private school says officials there are confident they can secure funding commitments to complete the finishing touches on a $2.3 million multipurpose building currently under construction.

Tim Windemuth, the development director at Palisades Christian Academy, K-10 school at 1115 N. Government Way, says the walls for the new building are up, and the roof is on the 12,000-square-foot structure, which will serve as a gymnasium and performance area for students.

Palisades Christian Academy sits on the north side of Government Way, directly across the street from Life Center Foursquare Church and just north of Greenwood Memorial Park and Riverside Memorial Park cemeteries.

Construction of the new building started last summer, he says.

Windemuth, 70, was hired as a part-time employee at Palisades Christian Academy about five years ago to assist the school in its fundraising efforts. He put in 30 years as the athletic director at Walla Walla University before retiring to Spokane, he says.

A substantial part of the university job involved fundraising for school athletics, and Palisades Christian Academy hired him for a similar purpose, he says.

“We’ve already raised about half the building’s cost and have secured pledges for the remaining costs over the next couple of years,” he says.

Windemuth says he’s had initial conversations with of a couple of cemetery and funeral home representatives about renting the multipurpose facility for gatherings and receptions as a way for the building to generate revenue for the school.

“The goal is for the building to be a potential asset for the immediate community,” says Windemuth.

The school was established in 1934 as Spokane Junior Academy. In 2009, the school moved to its current 39-acre site from 1505 W. Cleveland, and school officials changed the name to Palisades Christian Academy, the website says.