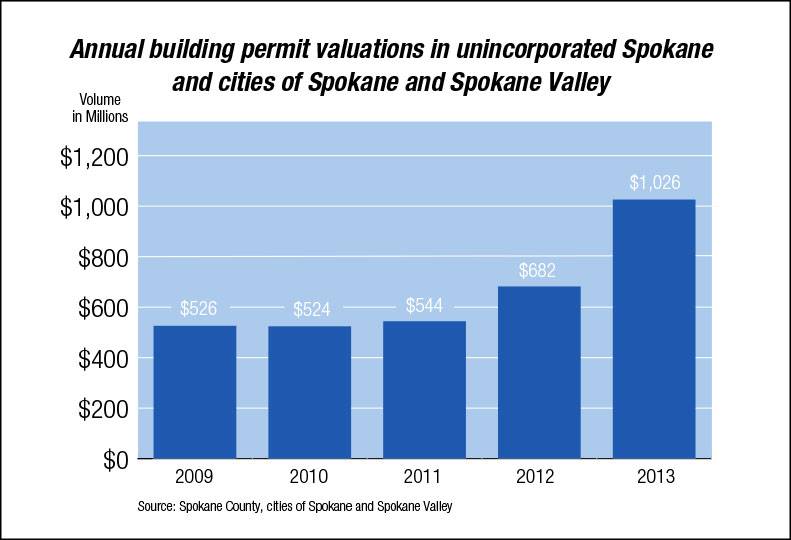 The total value of building permits issued in Spokane County soared to a five-year high in 2013 at just over $1 billion in the unincorporated county and the cities of Spokane and Spokane Valley, and they’re off to a fast start again so far this year.

The total permit valuation in the three jurisdictions was 50 percent higher in 2013 than in 2012, and nearly double the Great Recession-induced low of $523.7 million in 2010.

Permit valuations in Kootenai County rose at an even higher rate in 2013, compared with a year earlier.

“We’re confident our workload is up substantially from what we’ve seen three or four years ago,” Wills says. “Going forward from here, this could be one of our best years.”

Current projects the company has designed include the $60 million John J. Hemmingson University Center on the Gonzaga University Campus, four retail structures totaling 38,000 square feet with a combined value of $2.8 million at the Regal Plaza development in the Southgate area, and the $6.8 million Ruby Suites project on the Burgan’s Fine Furniture Block north of downtown.

Bernardo|Wills’ upcoming projects include the City of Spokane’s $14 million Nelson Service Center, which will consolidate the city’s solid waste, street, and fleet operations at 901 N. Nelson, in the East Central neighborhood.

The design company also has been involved in the application process for the planned $8.5 million NorthTown Mall expansion, and is the project consultant for a proposed $22 million Spokane County Library District bond measure, which, if approved next month, would include constructing a new $15 million Spokane Valley library branch at Balfour Park.

In addition to its main architect services, Bernardo|Wills, which has a staff of 25 people, also has divisions that offer landscape and interior design, all of which are busy, Wills says.

“Everybody is working at capacity and we could add some desk positions,” he says.

Jan Quintrall, business and development services director for the city of Spokane, says she expects construction momentum to continue this year, although she’s not predicting that the city’s total permit valuations in 2014 will top the 2013 total of $534.6 million.

The hotel project, which is being developed by Spokane hoteliers Walt and Karen Worthy, and the Spokane Public Facilities District’s expansion of the Convention Center have a combined value of $190 million.

This year is starting out at a faster pace than 2013, however, in regard to permit valuations.

Permit valuations in the city of Spokane for the first two months of the year, totaled $71.3 million, up from $28.9 million in the year-earlier period. Permit values so far this year are led by Rockwood Retirement Communities’ planned $51 million tower, to be called The Summit. Permits were issued last month for the 14-level tower to be erected at 2903 E. 25th, on the Rockwood South Hill campus.

She says that 2014 potentially will be a bigger year.

“I think just last week we got seven new single-family homes,” she says, noting that Liberty Lake also has approved final plats for new lots in the Rocky Hill and Legacy Ridge developments.

One of the highlights of the increase in valuations was strong growth in retail construction, including the CrossRoads Coeur d’Alene shopping center, which is anchored by a $6.5 million WinCo Foods grocery store that opened last fall.

Two retail structures with a total value of $1.6 million are under construction at CrossRoads at Coeur d’Alene, and Liberty Lake-based Spokane Teachers Credit Union plans to build a branch there, possibly this year.

Ryan Nipp, head of Leasing at Parkwood Business Properties, of Coeur d’Alene, generally is bullish about continued economic growth in Kootenai County, but unless other big anchors come into the market, retail development might slow down there, he says.

“There are some vacancies that need to be absorbed before market conditions point toward enough demand to create new projects,” he says.

One area, though, that could be ripe for retail construction is the Pointe at Post Falls, the big development on the west edge of Post Falls that’s anchored by a Cabela’s Inc. sporting goods store and a Walmart supercenter.

Utah-based Wadsworth Development Group acquired the Pointe at Post Falls last year and has obtained letters of intent from retail and restaurant concerns that might erect new structures there, Nipp says, adding that he’s not privy to the identity of the potential tenants.

David Callahan, Kootenai County’s director of community development, says he doesn’t see any megaprojects in the county’s pipeline, but he expects some continued growth in housing projects.

“Pent-up demand (for single family homes) seems entirely plausible,” he says. “It’s not surprising to me now that money is freeing up that we will see new growth here.”