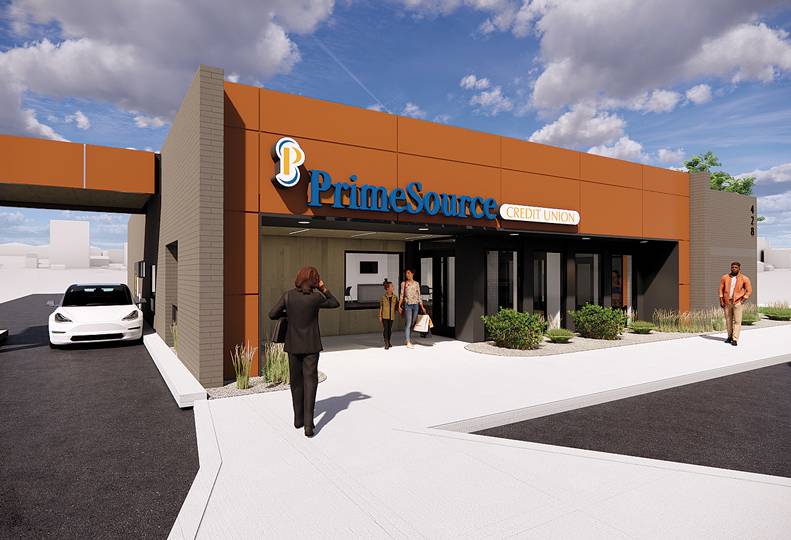 -ALSC Architects PS
Renovation of a PrimeSource Credit Union branch is underway and is to be completed by early 2022. Baker Construction & Development Inc. is the contractor on the $2 million project.

PrimeSource Credit Union, of Spokane, is working on a full renovation of its branch at 428 E. Third, east of downtown Spokane.

Permits have been issued for the project, and work has begun, says Annettee Babb, CEO of PrimeSource. Demolition of some interior walls of the building began earlier this month, she says.

Babb says the credit union has been planning the project for years.

“There were some things that needed to be replaced just because of the age of the building,” Babb says.

The work will include creating new office spaces, putting in new flooring and ceilings, and replacing electrical systems.

“The entire layout of the branch will look different,” Babb says. “Through the renovation, we’ll be trying to fit in more with the U District updates.”

The PrimeSource branch at the southwest corner of Third Avenue and Sherman Street is a few blocks south of the recently constructed Catalyst Building and the south landing of the University District Gateway Bridge.

PrimeSource, which was formerly Telco Credit Union, has occupied the 5,800-square-foot building since it was constructed in 1978.

“We’re trying to have that open, yet modern, look and feel,” Babb says. “We’ll have Wi-Fi at the branch, which is not something we’ve had before. We’ll have an ATM, which has been something that our members and the community in general often stop by there looking for.”

The project is expected to be completed by early 2022. “We’re pushing for year-end, but I think that realistically, we’re probably looking at the beginning of the year,” Babb says.

The branch hasn’t been updated in about 20 years, she says.

“We did a minor renovation about 20 years ago, but aside from that, it’s been the 1978 setup,” Babb says. “I remember in the early 2000s, we all took a weekend and came in and pulled up the orange carpet.”