City council slated to vote on ordinance this month 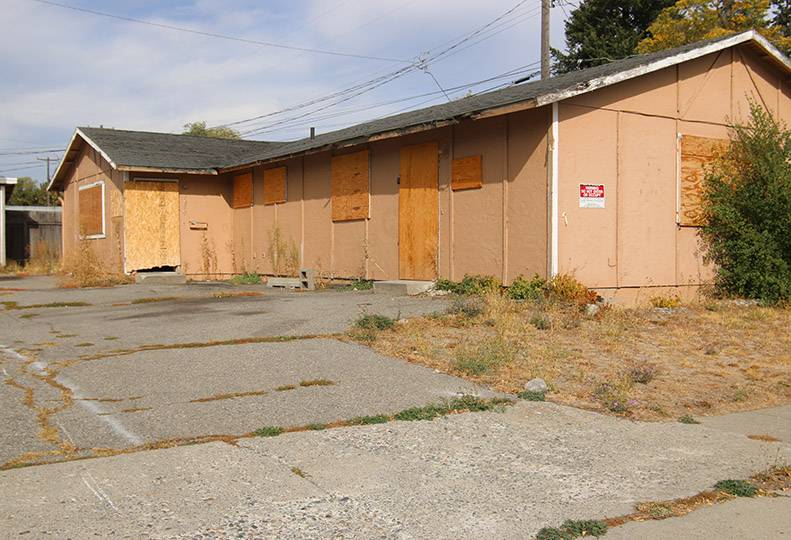 -Judith Spitzer
This duplex building, located at 3007 E. Fourth in east central Spokane, is one of 200 to 300 properties in foreclosure in the city currently.

City leaders say a proposed registry of vacant, single-family Spokane homes in foreclosure would hold companies and banks accountable for keeping the properties in good condition, but a mortgage lending association representative says many mortgage lenders are concerned the ordinance is overreaching.

Proposed by Spokane City Councilwoman Amber Waldref at an Aug. 11 council meeting, the ordinance would require lenders or other responsible parties to register abandoned properties with the city and to provide a local contact that is authorized to monitor and respond to issues with the property. A $200 fee would be required annually for each registration.

In August, the issue was deferred. Waldref has been reaching out to mortgage lenders and bankers for feedback. The city council will consider the ordinance again Oct. 20, at its regular meeting.

Waldref says the number of foreclosed homes in Spokane, which the city estimates at 200 to 300 properties, is tied closely to the housing recession of 2009, and many of those properties hurt the community through problems with crime, transients, illegal dumping and graffiti.

“We want to deal with this issue proactively,” Waldref says. “This registry would allow the city and lenders to deal with the homes and make sure the property is being maintained. This has been working well in other cities.”

Waldref says if the ordinance is adopted, the city will work through a third party to register as many of the vacant properties as possible.

“We want to avoid the buildings getting vandalized, attracting criminal activity and reducing the value of properties around them, and also avoiding getting into the substandard building process, which is cumbersome for both lenders and the city,” she says.

Waldref says many other cities have created such registries, including Hillsboro, Ore.; Wilmington, Del.; and Chula Vista, Calif.

Carey Oberst, who works as a mortgage consultant at Spokane-based Inland Northwest Bank and is president-elect of the Spokane Mortgage Lenders Association, says he is concerned that the registry is overreaching and won’t have much impact. Oberst attended a recent breakfast meeting at which Waldref outlined the proposal for association members.

“People are concerned that it’s too much government in business and wonder if it’s going to be a solution or just something that sounds good,” Oberst says.

He agrees the problem exists and that it can be a drain on property, but contends that most financial institutions do their part to maintain the properties, while only a few don’t.

“A lot of banks do take care of them and fix broken windows, mow the lawns and maintain them,” he says. “But there are a few bad ones who don’t hold up their ends.”

Oberst says he doesn’t believe the minimal $200 fee to be collected from owners and lenders will adequately cover monitoring the number of properties involved because of costs involved in keeping an eye on 200 to 300 abandoned properties.

Waldref says the ordinance only addresses a situation in which the owner has abandoned the property and there is some type of foreclosure, trustee’s sale, tax assessor’s lien sale, transfer in lieu of foreclosure, or contract forfeiture.

The city would contract with a third party to manage the registry, Waldref says, while the city’s neighborhood services and code enforcement department would be responsible for administration and enforcement. A waiver would be required as part of the registration under the proposed regulation, which would give the city staff or contractors the ability to secure, clean, paint, or address nuisance conditions.

“The city has two options: We can do it ourselves and keep it in-house or we can use a vendor,” Waldref says.

Failure to register such properties could result in a Class 1 civil infraction with an as-yet-undetermined fine for each day out of compliance and a criminal misdemeanor violation, according to the proposed ordinance.

Waldref says the city could choose to issue a ticket for the civil infraction, which would cost about $500.

“The reason we chose to put a Class 1 infraction on this is to provide a hammer to get parties to register and we chose a Class 1 because it is more expensive than the registry, thus incentivizing signing up for the registry rather than paying a more expensive ticket.  The language -issuing a ticket every day – is consistent with the  Class 1 civil infractions in other places in our municipal code, she says.

Waldref says the issue is further complicated by the fact that foreclosure has become a two year or longer process for lenders.

“It takes so long,” he says. “There are a lot of due-process laws that make it better for the consumer, but that means it takes longer.”

Under the proposed ordinance, companies would be required to register a property during the first 30 days it’s abandoned, and failure to register could automatically cost $200.

Waldref contends that a proactive approach would increase neighborhood safety and create a process to manage complaints and problems early on. She says she has talked with several people who have had abandoned homes in their neighborhoods, and it presents an opportunity for criminal activity that then has to be addressed by the Spokane Police Department.

“This approach also has the benefit of keeping properties out of the city’s substandard building official process,” she says. Substandard building complaints are turned in by citizens or agencies and can ultimately result in the property being demolished at the owner’s expense, if they meet certain criteria and are deemed unfit by the city.