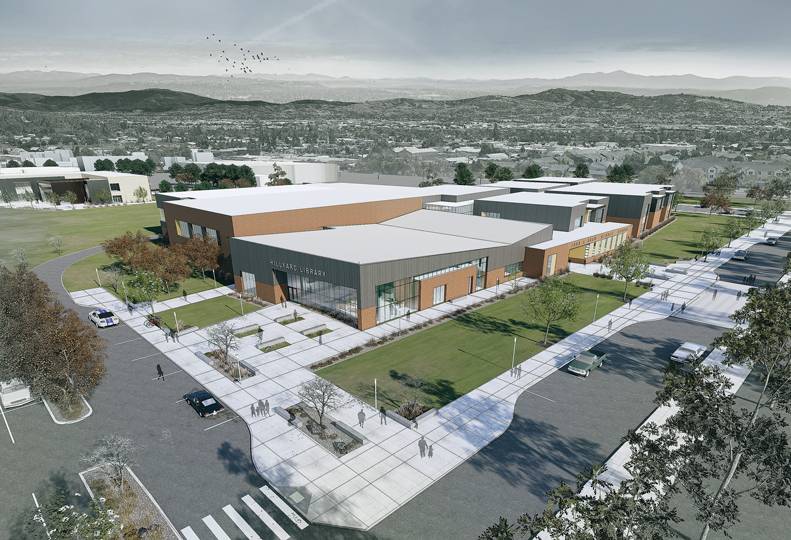 -—Integrus Architecture PS
As part of a “project swap” between Spokane Public Library and Spokane Public Schools, a new Hillyard library branch will be built into the Shaw Middle School building.

Spokane Public Library and Spokane Public Schools officials have formed a honey of partnership for the purpose of constructing a 13,900-square-foot building they say will meet demand for more meeting space in East Spokane.

For the facility, to be named The Hive at Libby Center, the school district has provided the library district with a vacant plot of district-owned land at 2904 E. Sprague, just north of the Libby Center, at 2900 E. First. The two-story former middle school is home to gifted-and-talented education programs and staff-development programs.

For its part, the Hive will be dedicated exclusively to meeting spaces, says Caris O’Malley, deputy director of Spokane Public Library, which will operate the building.

Construction of The Hive is scheduled to start in the first quarter of 2020 and end in either fourth quarter 2020 or early in 2021.

The $5 million building is part of a project swap executed by the school district and library, O’Malley says.

Spokane Public Library will build the Hive, and in return, the school district will build a new Hillyard Library – also at an estimated cost of $5 million – which will be located at Shaw Middle School, at 4106 N. Cook, O’Malley says.

Spokane Public Library hasn’t decided what it will do with the current Hillyard Library, at 4005 N. Cook, he says.

“The Hive is going to be a nontraditional library in that its chief features are going to be the meeting and creative spaces it will offer,” O’Malley says.

In recent years, Spokane libraries have seen a slight decrease in checked-out material and an increase in use of building space, specifically meeting rooms, he says.

“Businesses, church groups, language learning groups, you name it, the demand for meeting space is high around Spokane,” O’Malley says.

In addition to more meeting rooms and conference space, four studio rooms will be available for Spokane-area artists to create work and teach classes, he says.

Greg Forsyth, director of capital projects for the school district, says both parties have had input in designing the building. Spokane-based Integrus Architecture PS is the project architect.

O’Malley says a general contractor for the project will be selected in the first quarter of 2020.

The school district will make the Hive its permanent home for its virtual learning programs, currently located in the Libby Center, freeing space in Libby for other educational efforts. The Hive also will have training space for school district personnel, Forsyth says.

“We’re really excited about the Hive and this unique opportunity to partner with the library,” Forsyth says.