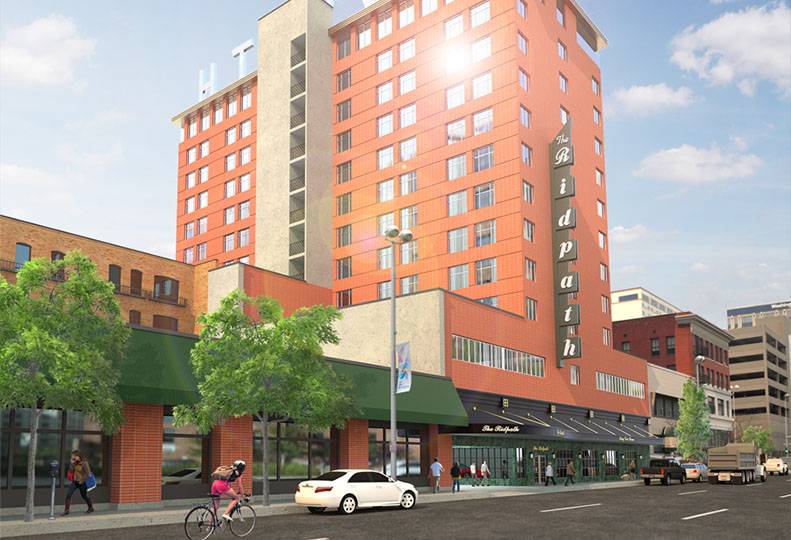 Ron Wells, who heads the Spokane company that plans to redevelop the historic, but downtrodden Ridpath Hotel into the Ridpath Club Apartments, says the Washington State Housing Finance Commission is looking favorably on the funding package lined up for the project.

The company, Wells & Co., now projects funding will be in place for construction to begin this winter.

The Housing Finance Commission, which held a hearing on the Ridpath proposal last month, is expected to approve up to $13 million in multifamily revenue bonds toward the project, Wells says.

“It seemed to go extremely well,” Wells says of the hearing. “The staff of the Housing Finance Commission has been working with me on this package for two years. There is strong staff support.”

Wells says the bond application set a record for the commission in terms of sheer bulk.

“Never before has one application for bonds weighed in at 14.65 pounds for just one copy,” Wells says. “The staff person who told me that said nobody wants to count the number of pages, because it’s such a tall stack.”

The bonds will provide short-term construction funding similar to a bridge loan used in private projects, Wells says. It will be converted to long-term, low-interest financing when the project is completed, Wells says.

Wells says a project-review group with the Federal Housing Administration’s Seattle office toured the property here a few days before the hearing.

“It all seems to be lined up for closing on the FHA loan for apartments on Feb. 12,” he says, referring to a tentative $11.9 million long-term financing package that would be insured by FHA.

FHA had required an updated appraisal and market-demand analysis as the agency prepares its final loan commitment.

“Both of those came back a few weeks ago stronger and more supportive than ever,” Wells says. “The tax-credit investors equity seems to all be dialed in.”

In addition to the FHA-insured financing, the funding package includes $6.9 million in tax credits and $1 million in developer equity, Wells says.

“The tax-credit people want participation from the city to show good faith in the project,” he says.

Wells says he expects the City Council will take up the loan request by the end of the year.

The project includes redeveloping the former hotel at 515 W. Sprague, and the attached four-story east annex, also known as the “Y” building, at the southwest corner of First Avenue and Stevens Street.

Wells also is a principal in Ridpath Club Apartments LLC which has been consolidating the fractured ownership of the property. Portions of the hotel property had been sold to a number of independent investors since 2006.

Ridpath Club Apartments plans to use some of the project financing to complete the consolidation by acquiring a portion of the hotel tower from a Las Vegas-based investment group.

Another Wells affiliate, Ridpath Penthouse LLC, is developing separately the top two stories of the 13-story Ridpath tower. Six two-floor condominiums under development there will range in size from 1,200 to 4,000 square feet of living space, Wells says.

The total project cost now is projected at upwards of $20 million, he says. That doesn’t include the cost of constructing six penthouse condominiums.

“The condominiums are completely separate,” Wells says, although he declines to disclose the development costs for the condo units.

Wells estimates that the first of the condominiums will be completed in February.

By that time, he plans to be ready to start work on the apartment project.

Construction plans for the apartment units are under review by the city, Wells says.

For the project to qualify for the tax credits, the micro-apartments will be reserved for tenants who earn less than 60 percent of the median area income, Wells says.

The target market for the apartments will be young professionals.