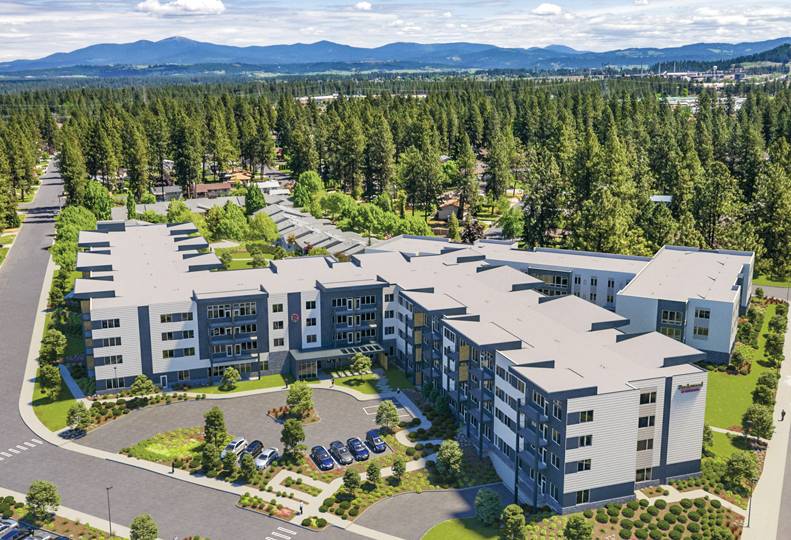 -NAC Architecture
Rockwood Retirement Communities hopes to complete the redevelopment of its Rockwood at Whitworth complex in two phases during the next three years.

The name is intended to honor the partnership that Rockwood formalized with the university earlier this year.

The 420,000-square-foot, 192-unit project, which is expected to be completed within three years, will house a mix of memory care, assisted, and independent living.

The retirement community has long been considering its options for redeveloping the Rockwood Hawthorne campus, at 101 E. Hawthorne Road, says Eowyn Sallis, director of marketing for the organization.

For a time, it considered building directly on the Whitworth campus, adds Larry Probus, vice president of finance and administration for the university. However, the campus didn’t have the necessary space, and the idea was scrapped in favor of replacing the existing facility, which is located just to the east of Whitworth across Division Street.

Sallis says Rockwood decided it wanted to avoid displacing current residents, instead electing to relocate current residents to one side of the building, to allow the other side to be demolished in phase one of the two-phase project, which is expected to begin in November.

Construction on both phases is expected to be completed in three years, with phase one expected to take 16 months.

NAC Architecture, of Spokane, designed the project, which is being built by Walker Construction Inc., also of Spokane.

The project will include three dining venues, an event center for large-scale lectures and dances, an exercise facility, a movie theater, an art studio, and a salon and spa, Sallis says.

The partnership between Rockwood and Whitworth will open opportunities both to students and Rockwood residents, says Probus.

While the parameters of the program have yet to be determined, Probus says some ideas include allowing Rockwood residents access to the aquatics center currently being renovated on the Whitworth campus, free participation in athletic events, discounted university courses, and access to theater and drama events.

On the student side, the partnership could include establishing an artist-in-residence program where an art or music student would live at the community and provide musical performances or art classes. It also could include mentorship or internship opportunities, and the ability for nursing students to gain clinical hours at the community.

Sallis notes, “There are lots of ideas. I would say the ideas are almost endless,” and that the planning committee, made up of about eight representatives from both organizations, is now working to narrow down the list.

Probus adds, “I don’t think either one of us know the extent to which this will help bring our two groups of people together, but there are so many opportunities.”

He says Whitworth plans to build a new health science building in the coming year that would house a new physical and occupational therapy program that could allow for students to practice therapy techniques with residents.

The new health sciences building is one of three projects planned in the coming year on Whitworth’s campus, says Probus. The university also plans to construct a new residence hall and relocate its facilities services building to Waikiki Road on the edge of campus.

Probus says the new health sciences building could be located at the former site of the facilities building, but Whitworth is also considering locating the new facility in the University District, in close proximity to other universities’ health sciences programs.

In total, the three university projects are expected to cost between $20 million and $30 million.

“What today’s seniors want in retirement living is very different than what they wanted not long ago, so to maintain marketing and being competitive in our industry, we really need to redevelop and add new amenity spaces and new apartments,” she says.

One other perk of the partnership lies in the increased access to Whitworth that university alumni living at the community would enjoy, Probus says. He adds that the university always is looking for ways to connect the alumni with the university.

“This is a tangible way we can do that,” he says.

Sallis adds that about 30% to 40% of potential residents who have already paid the 10% deposit for space in the new building have a Whitworth affiliation, whether they attended, worked, or had a relative attend the university. The facility already has over 300 potential residents on the priority list for living in the new facility.

Sallis attributes the high interest to the combination of Rockwood’s reputation and the Whitworth partnership.

“I think the North Side of Spokane has been wanting something like this for a long time, and the partnership with Whitworth has been received with a lot of excitement,” she says.

Probus says the partnership itself will require a nominal budget, and the university will need only to adjust for extra chlorine for increased pool usage, and other small expenses.

Sallis says, “There’s a lot of research behind the benefits of life-long learning and intergenerational programming, and it really enables us to do both by partnering with the university.”

Several studies have been performed regarding the benefits of intergenerational relationships for both the younger and older generations. A study released in 2016 by the Stanford Center on Longevity noted that such relationships promote understanding and respect between generations and that establishing such relationships helps diminish the impacts of declining physical and mental health in older people.

Probus adds that he believes increased activity for older people helps to stave off mental deterioration and has multiple health benefits.

Currently, only about 85 similar relationships exist nationwide, two of which are in Washington state. The Rockwood-Whitworth partnership is the first partnership of its kind in Spokane, according to data from retirement research company Retirement Living Information Center.