So Val, So Good: Developments to add 1,000 new housing units at southern end of Spokane Valley 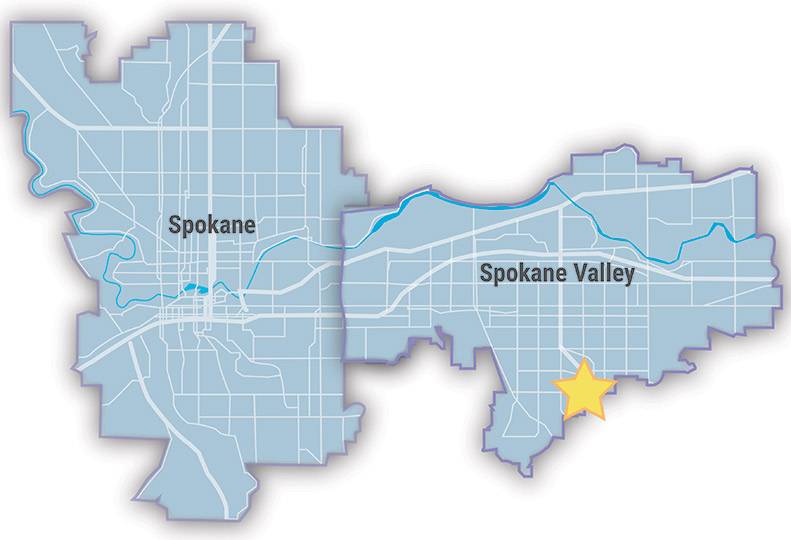 Six projects that could add 1,000 living units and some community open space in the Valley Urban Growth Area are proposed or under development at the south end of Spokane Valley—a neighborhood locals refer to as So Val.

About a 20-minute drive southeast of downtown Spokane, the developments are located in the general area of South Dishman Mica Road and state Route 27, south of East 32nd Avenue and north of South Mohawk Drive.

The neighborhood developments potentially will include 980 to 1,003 new residential units, according to permit applications on file with the city of Spokane Valley and Spokane County.

Belle Terre is planned as a 48-unit multifamily development. David Black, CEO of the Spokane-based real estate development company, says due to the hillside environment at the site, Belle Terre will be residential only. The project is in the design phase currently, and Black says permit applications will be submitted in the next 30 days.

Black says the Belle Terre development will be built in multiple phases over time. The first phase of development will have 48 units. The project will take about five years to completely develop.

“There’s going to be a lot of green space and a lot of views because it’s on a hill,” Black says.

“We hope to break ground as soon as possible, but we’ve said that now for a number of years,” says Black.

As previously reported in the Journal, after the initial project proposal was announced about eight years ago, it was opposed by many community members. About 380 public comments were submitted between two public comment periods in 2016 and 2018, the majority of which opposed the development.

Black says, “We finally finished the environmental impact statement that we voluntarily did for the project. That has been submitted to the city of Spokane Valley for final approval and review. And we’re very close to getting approved, I believe.”

Black adds that he expects the development will be approved this year and says he feels confident that the community’s concerns will be addressed, and groundbreaking will occur next year.

He says the project has two options for development. The first option will have 300 single-family homes and 280 multifamily units.

As previously reported in the Journal, the second option proposes 272 single-family homes and 325 multifamily units.

Both options would have the same infrastructure improvements, as well as 30 acres of open space, and a 10-acre park and wildlife travel corridor.

A contractor will be selected to build the homes after a development option is selected.

“We might build multifamily, and we might build commercial, but we won’t be building the houses,” Black says.

The Spokane office of D.R. Horton Inc., a national homebuilder, will add about 330 homes in south Spokane Valley in two separate residential developments.

The Madison Hill subdivision will have a total of 36 homesites with a mix of single-story and two-story homes, each between 1,600 and 2,600 square feet in size, says Stephanie Link, marketing manager for the Spokane division of D.R. Horton.

D.R. Horton has started construction on a model home at Madison Hill, which also will be featured in the Spokane Home Builders Association’s annual Fall Festival of Homes, in September.

The D.R. Horton Spokane division is the developer and the builder for the project, and the company also provides its own architectural services for its developments, Link says in an emailed statement.

Storhaug Engineering Inc., of Spokane, is the engineering consultant for Madison Hill.

Link says the lots at Madison Hill will be open for sale this summer with the first homes available in the fall.

D.R. Horton estimates the new homes will be completed in less than five months after they’re released for sale to avoid having customers waiting up to a year for a home to be built, Link says.

Construction in the subdivision is expected to last through early 2023.

Elk Meadows Estates is another, and the largest, D.R. Horton development in the south Spokane Valley area. The development is partially located on land formerly occupied by the Fairmount Memorial Association’s South Pines Cemetery, on the southwest corner of the intersection at East 32nd Avenue and State route 27.

“They’re moving a lot of ground there now,” Link says.

Grading work and utility installation are both currently in progress at the property. The development will have more than 300 homesites once complete. Roadwork and about 68 homesites are planned for the first phase of construction, Link says.

Link declines to disclose the cost of developing the residential subdivisions. However, Spokane-area homes marketed on the company’s website typically are listed at over $450,000, which could put the value of Madison Hill and the first phase of Elk Meadows at over $47 million.

Design plans are still ongoing for Elk Meadows Estates, but the company envisions having community amenities including open and green spaces with paved paths.

The final plat application for Elk Meadows Estates has been submitted and is currently under initial review with Spokane County, according to permit documents.

Since D.R. Horton announced its plans for the Madison Hill subdivision, the company has received calls every day from people interested in the development, Link Says. While there is limited availability in the smaller development, she says the homebuilder can now offer alternative homesites at Elk Meadows Estates nearby.

Link says there has been a gap in new residential construction in southern Spokane Valley which makes the area an ideal place for D.R. Horton to build.

“We’re excited to fill that need in the market to offer new construction homes around the schools, parks, and amenities of that particular area,” she says.

Another development in southern Spokane Valley, called Dishman Estates at the Alteneder Ranch, proposes the division of over 20 acres of land into 22 lots for single-family homes.

The property is located on the southeast corner of Dishman-Mica Road and Thorpe Road and is situated west of the D.R. Horton Madison Hill project.

The lots will be located on just over 7 acres of the property, with the remaining 13 acres left in an open space tract, in a low-density residential zoned area, according to permit information on file with Spokane County.

An open-space project is being planned in the area by the city of Spokane Valley.

The city has acquired 17.5 acres of land located south of East 44th Avenue and west of South Dishman-Mica Road from the Central Valley School District.

A statement from the city of Spokane Valley says specific plans aren’t available yet, but the site is one of several general locations identified in the city’s 2019 parks, recreation & open space master plan update.

Up to 4 acres may be made available for the Spokane County Fire District No. 8 to purchase for an upgraded fire station, after the creation of a joint site plan, the statement says.

The parcels were previously zoned single family residential R-3, which permits parkland. The change signals and clarifies the city’s intent to use the space as a park, according to the statement from the city.