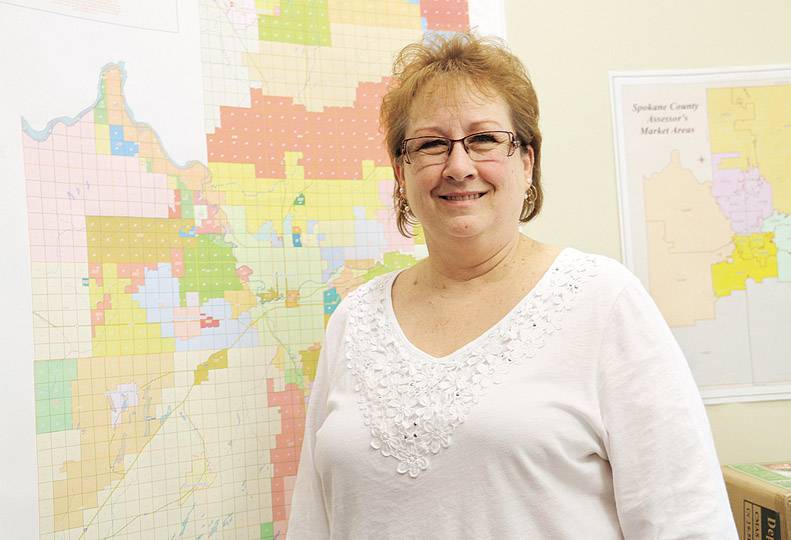 -—Judith Spitzer
Vicki Horton, recently re-elected as Spokane County Assessor, says the number of appeals filed with the office has declined. Property owners filed 827 this year, down from 1,018 last year.

With nearly 72 percent of the votes in the recent election, Republican Vicki Horton has four more years as Spokane County Assessor—and a mandate to keep doing what she’s doing.

To Horton, that means her office must maintain accountability and taxpayer trust, and provide exceptional customer service to county residents in a market in which property values are increasing and assessors are being asked to do more.

“I feel like taxpayers have been able to gain trust with our office and how we do business,” Horton says. “I feel privileged to serve the people of Spokane County.”

In her first run for public office, Horton was elected to the office of county assessor in 2010 after running against her then-boss, Ralph Baker. Before the election, she worked for Baker as an appraiser from 2000 to 2010. Previously, she worked as chief deputy appraiser in Clearwater County, Idaho. Her appraisal experience in commercial, industrial, personal property, residential and, mobile home, as well as disaster and contamination appraisals, topped her list of qualifications while running for office this year.

The job of the county assessor is clearly defined. Horton is tasked with leading a department of appraisers who determine precise valuations of county property. The office has to meet state’s deadlines and target dates to calculate levy rates and get the tax roll certified to the county treasurer in mid-January.

The tax roll provides the county auditor with an abstract of the tax rolls showing the total amount of taxes collectible in each taxing district. Spokane County has 56 taxing districts. Assessments for 2015 property taxes are based on 2014 valuations.

In 2013, the county assessed nearly 225,000 parcels, including almost 210,000 real property parcels, more than 12,000 personal properties, and 1,933 state-assessed properties. Revaluations of property must be completed by May 31, and then new construction totals are added in September. Several other steps are required by the assessor after the September deadline, including those required to calculate levy rates.

Property values are up overall nearly 3 percent, and have been climbing since 2012, Horton says. New construction is also up this year.

An earlier Journal article reported total property values took an upward turn in 2013 for the first time since 2009, and levy rates leveled off after edging higher every year since 2008. Spokane County’s total assessed value in 2013 was $37.2 billion, up 2.3 percent from a year earlier but still 3.9 percent below the county’s 2009 peak valuation of $38.8 billion.

Another way to gauge the success of the assessor’s office is the number of appeals filed. Appeals are markers for how much disagreement there is with the accuracy of appraisals.

Horton says that for the last three years, her office has been on time with revaluations, assessment of new construction, and appeals. The county also has met assessment standards.

“This staff works like the dickens,” she says. “We are not behind.”

During her tenure as an appraiser in the department, Horton says each appraiser had about 12,000 parcels to cover annually. Today, that number is almost 16,000 parcels per appraiser. Of those, 3,000 to 3,500 parcels must be inspected in person. The remaining appraisals are done by online market appraisals.

“I can’t imagine being back in those shoes with that many parcels to do,” she says.

On average, the budget for the assessor’s office is about $3.5 million, Horton says. She currently has a staff of 43—among them 13 residential appraisers, eight commercial appraisers, and three personal property appraisers. The remaining employees are administrative staff.

Horton credits her staff with the office’s success.

“We are very well staffed,” she says “The staff is phenomenal, and very conscientious.”

In this latest election, Horton ran for the office against Spokane Republican Roger Trainor, a certified real estate appraiser. Trainor criticized Horton for lack of standardized assessments and a dearth of technology, which means appraisers still use pen and paper in the field rather than downloading information from tablets or laptops to office computers.

Horton contends Trainor’s comments consisted of non-truths and half-truths. She says she wanted to stay out of the fray. “I didn’t want to get down to his level, so I just let it go,” Horton says.

Horton says her staff does more work, with fewer employees, than appraisers did before her tenure.

The office accomplished that by improving day-to-day processes that have allowed appraisers to more effectively do their jobs, she says. “Everything is computerized and we can run a whole neighborhood … we’re able to do things at a glance and it’s all bundled into one area,” she says. She contends her office is one of the most on time in meeting state deadlines.

“Our primary valuation software in appraising real property is an industry leader in ‘mass appraisal’ technology,” Hollenback says. “However, we have found that a more effective and accurate way for us to analyze this data is to review and analyze the data in spreadsheet format. We believe this approach has led to a more consistent and balanced approach to treating properties and taxpayers fairly and equitably,” he says.

Horton says appraisers are still doing appraisals in the field without the help of laptops or tablets because of a problem she inherited. In 2006, she says her predecessor bought field tablets, but she claims he hadn’t done any research to confirm they would work in the field.

“They didn’t work in the field. Then in 2008 he bought them all new laptops, which weren’t functional either, and they were even heavier than the tablets,” she says.

“I ditched them too and staff now works on central computers. In other words, they write notes in the field. And enter them into spreadsheets,” she says.

She says she has been researching the use of tablets and plans to add them this year or next.

“We do plan to go to field tablets or something like an iPad or another tablet. There are several counties using them now successfully. But I don’t want to buy something, spend the money and then not have it work,” she says. “I want to wait until the systems are all up and running right, and the bugs are out. And yes, it will increase our efficiency a lot.”

Horton contends she has spent considerable time and effort on communicating with the citizens of the county and that her office has provided them with good customer service.

Horton says she’s gotten the word out about exemptions, which exceptions to taxes for senior citizens and those who are disabled, as well as about claims to reduce assessments because of loss of value due to a declared disaster.

“We send out senior exemptions on assessor’s notices in June, so every taxpayer gets one. They get a postcard so every property owner knows,” she says.

She says the information on exemptions and filing for disasters is on the assessor’s office website, and the agency does a lot of outreach at assisted living centers, community centers, neighborhood groups and such, to communicate with the public.

Horton says her favorite part of the job is going out into the public.

“I like interacting with people, getting to know people’s problems. I feel more confident talking to people in the community. In person they can be honest,” she says.

The hardest part of the job?

“It is having to make hard decisions with staff when I’ve had to reprimand people, and reposition one person,” she says. “It’s not an easy thing to have to do that with people you work with, that you consider friends. I still use my heart as my guide. I pray before every decision I make, and I follow that guidance.”

Horton says her office functions well, but she anticipates needing more appraisers should it see a significant increase in property revaluations.

“We can still do the job, but if we have another boom, we’ll be in trouble,” she says. “Hopefully, we can hire another appraiser in the next couple of years.”