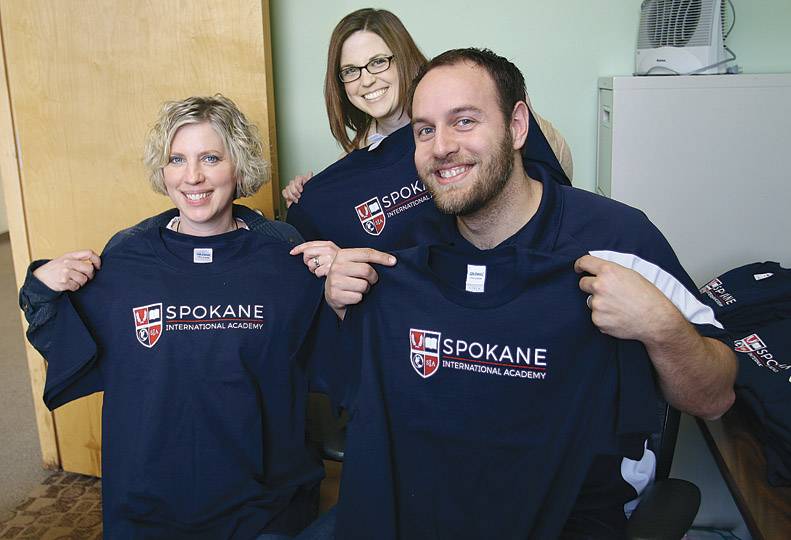 Spokane International Academy, one of two free charter schools authorized by Spokane Public Schools to open this fall, is putting the finishing touches on the 1914 building in Hillyard that will house its first students, says Travis Franklin, the school’s founder.

With an emphasis on challenging students academically, including through global learning, and language immersion, the new school will occupy the space that was formerly St. Patrick’s Catholic School, at 2706 E. Queen.

Franklin says the international academy is one of many choices parents and students have in the Spokane Public Schools portfolio system, and he’s excited families have the ability to choose what type of education their children will receive and “still get a great education.”

After graduating from Whitworth University, Franklin taught in the Mead School District for eight years, before deciding to pursue opening a charter school. He says he was fortunate to find a facility so quickly. A tip from a community member about St. Patrick’s imminent closing prompted him to start talking to staff at the school last year about leasing the facility. The former Catholic school has about 20,000 square feet of space with 12 classrooms.

“Because it was already being used as a school, there wasn’t that much that needed changing, only minor upgrades,” Franklin  says.

He says he started recruiting students last October, after being approved in September by Spokane school district administrators.

Charter schools typically start with a certain grade level and then add another grade level each year until reaching full enrollment.

Franklin says the school will be adding two additional grade levels each year until it reaches full enrollment. The school will open with kindergarten, first- and sixth-grade students to start and eventually grow to include eighth grade.

Charter schools are authorized for open enrollment in Washington state and follow the same state and federal curriculum standards as other public schools.

“We’ve had an amazing response,” Franklin says. “We have students from 11 different school districts represented in the student population, including families from Loon Lake, Cheney, West Valley, and all of the surrounding areas.”

Students in kindergarten and first grade were chosen through a lottery since so many students applied for the slots. Of the 160 available student slots, 150 have been taken.

Franklin says he received a $600,000 grant from the Washington State Charter School Association, which he says has been used for startup costs, including salaries paid to administrators who are already working at the school.

So far, he says he’s hired seven teachers and four administrators to staff the school, bringing the total employees to 12, including him.

Charter schools are funded through state and federal tax dollars like other public schools. Spokane International Academy will receive its share of local levy funding on a per-student basis from Spokane Public Schools in its first year. Per-student funding is based on the total approved levy funding, divided by whatever the total district enrollment is, in addition to typical state and federal sources of funding. Those payments aren’t distributed until the end of September.

Based on the internationally-recognized and highly-touted Cambridge curriculum, derived from Cambridge University in Great Britain, the curriculum at the charter school will focus on challenging students academically, behaviorally, and in developing a global worldview through internationally-focused activities, says Franklin.

“Habits of mind are 16 essential habits that allow student to be successful, such as flexible thinking, being open-minded, and persistence,” he says. “Global competence is awareness of what’s happening around the world and understanding (one’s) place in the world.” He adds that he wants students to know how their choices impact nature as well as other people.

“Conflicts in the world impact prices of certain goods, and it affects our economy and our lives,” he says.

“The name Spokane International Academy came out of where our school is, and what it’s about,” he says adding that “the word academy conveys a different attitude because it’s reminiscent of the first ancient academy created in Greece by philosopher and teacher Aristotle.

Pride Prep, a college prepatory school, which also opens this fall, was the first charter school to be authorized in Spokane, after Washington voters approved charter schools in 2012. Pride Prep is set to open this fall at 811 E. Sprague, near downtown Spokane, in 15,000-square-feet of leased space formerly occupied by the Social Security Administration.