Post Street Bridge project could last through this year 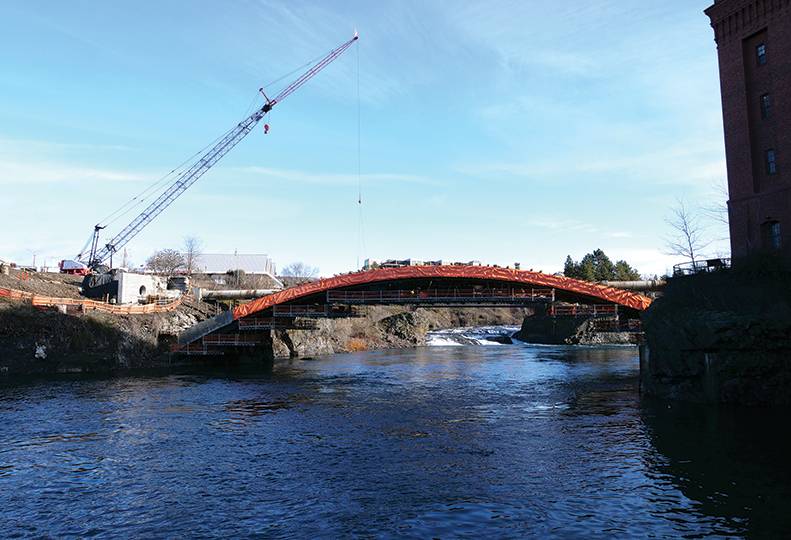 The work includes $80 million in new public works projects and $20 million in work carried over from last year.

Perhaps the most visible ongoing project is the Post Street Bridge replacement on the west edge of Riverfront Park, in downtown Spokane, where the city is spending $18.5 million to repair and replace the 105-year-old, 333-foot-long structure. In May 2019, the bridge was closed to vehicles after the city deemed it unsafe for motor traffic due to structural insecurities.

The bridge rebuild could last through the end of the year, possibly continuing into 2023.

Spokane-based Max J. Kuney Co. is the contractor on the project, and Seattle-based KPFF Consulting Engineers designed it.

On Riverside Avenue downtown, the city is preparing to improve the roadway from Division to Wall streets. Construction will involve reducing the four-lane, two-way street, to one lane each direction and a left-turn lane. Protective bike lanes also will be installed on Riverside, between the streetside parking and the sidewalk.

“This is the first time we’re actually installing something like that. This is a test to see how the community likes that approach,” Feist says.

The project is valued at $5 million. The bidding process to select the contractor for the Riverside project will begin in April.

In Spokane’s East Central neighborhood, the city will begin the reconstruction of the Thor-Freya corridor this spring, and construction is expected to last about six months, Feist says.

The project is valued at nearly $9 million for a complete roadway reconstruction, curb and stormwater facility replacements, and water and sewer replacements from Sprague Avenue to Hartson Avenue along both Thor and Freya streets.

Cameron-Reilly LLC, of Spokane Valley, is the contractor on the project.

Feist says the city is excluding four intersections from the project to be worked on in a separate project in 2023. The intersection work will cost another $1.5 million, Feist adds.

North of downtown, the city is planning a $1 million North River Drive sidewalk improvement project to upgrade the pedestrian entrance to Riverfront Park from Division Street to Washington Street. LaRiviere Inc., of Rathdrum, is the project contractor. The sidewalk installation will take about three months to complete and is expected to begin this spring, Feist says.