$25.5M in construction planned at separate sites near Moran Prairie 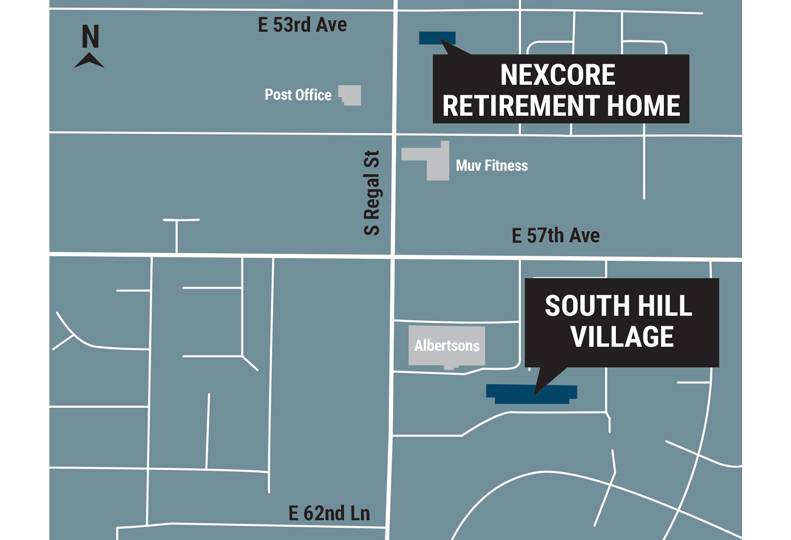 The Spokane County Building and Planning Department has issued a permit for the remodel valued at $1.5 million. Rob Jacobsen, sales and marketing director of South Hill Village, says he expects costs could reach up to $3 million for the project.

Minnetonka, Minnesota-based Schoenfelder Renovations Inc. is the contractor for the project; and Bellevue, Washington-based Wattenberger Architects Inc. is the project architect, according to Spokane County permit documents.

Renovations will be concentrated in the assisted-living facility, a three-story, 106,000-square-foot building, and in the memory care unit, a separate one-story building, on the 8.4-acre campus, Jacobsen says.

The retirement community has 160 living units in total, including 104 assisted-living units, 40 memory-care units, and 16 independent-living units.

Interior work has been pushed back a number of times, Jacobsen says, but fresh paint on the exterior has been completed. The interior remodel is set to begin this spring and include painting, replacing the furniture, and installing new flooring in all common areas. Renovations are expected to be complete within four to six months.

About half-mile north of South Hill Village, the city of Spokane has recently approved a grading permit for a planned $22.5 million assisted-living and memory care center, at 5311 S. Regal.

The site is owned by Vaughn’s 57th Avenue LLC, which is governed by Cyrus Vaughn, a restaurateur who co-owned Cyrus O’Leary’s Pies with Barclay Klingel, the company’s CEO, before selling Cyrus O’Leary’s to Sara Lee Frozen Bakery, in 2020.

•The Spokane office of Horrocks Engineers, a Pleasant Grove, Utah-based civil engineering company, has moved its office to a larger 4,000-square-foot space in the Iron Bridge Building, at 714 N. Iron Bridge Way, in Spokane.

Previously, Horrocks Engineers was in a 2,700-square-foot office in the Eldridge Building, at 1325 W. First, in Spokane’s Riverside neighborhood.

Brian Belsby, principal and office manager of Horrocks, in Spokane, says in a press release, “We will be able to provide full-service engineering services to new and existing clients in Washington, northern Idaho, and the Inland Northwest.”

Belsby Engineering was founded in 2000 and was later acquired by Horrocks Engineers in 2019. Horrocks has 15 employees in Spokane, and over 750 employees throughout 20 offices in eight states.

•The city of Cheney has been awarded two grants totaling $349,250 for the installation of a solar array at Cheney’s Wastewater Treatment Plant, located at 119 Anderson Road.

Washington state Department of Commerce provided a $189,250 grant from its Solar Grant Program. Canadian utility company TransAlta contributed a grant of $160,000 for the project, says Todd Ableman, public works director for the city of Cheney.

The Spokane office of Apollo Solutions Group is the consultant and contractor for the project, he says.

The solar panels will be installed in the fall. Aleman says he anticipates the assembly will be completed by year-end.

“The power provided by the solar panels will pretty much save what we’re paying now in electrical costs,” he says.