Whatever Happened With: The U District High-Rise Project

Old muffler shop to be demolished, but no construction plans are on file 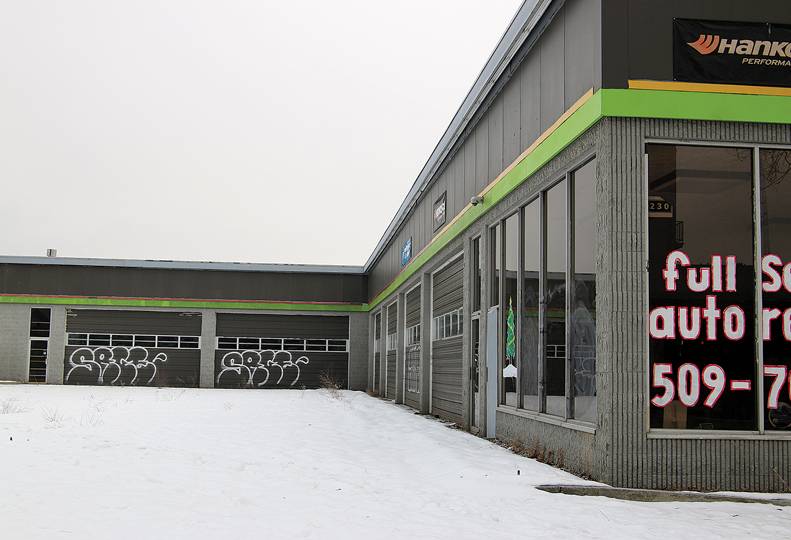 -MIKE MCLEAN
The former Downtown Midas Muffler building, at Spokane Falls Boulevard and Division Street, will be torn down after sustaining vandalism and multiple break-ins, one real estate agent says.

An old muffler shop on the high-traffic corner of Spokane Falls Boulevard and Division Street is to be demolished, but the high-rise apartment building once planned for that site doesn’t appear to be imminent.

The city of Spokane currently is reviewing a new application to raze the former Downtown Midas Muffler building, at 230 N. Division.

Spokane County Assessors’ records show the site on the east edge of the University District near downtown is owned by Riverside Apartments LLC, which is governed by prominent single-family and multifamily residential housing developer Lanzce Douglass.

While the demolition would be the first major contractor activity on the site since the building was erected in 1978, at least three mixed-use commercial and residential developments have been proposed there since 2014.

The most recent was in 2016 by San Clemente, California-based University Housing Partners, which explored developing a $20 million, six-story building to include 12,000 square feet of retail space and a 100-space parking facility on the ground floor and five floors of apartments.

At the time of that proposal, an affiliate of University Housing Partners had just completed the 940 N. Ruby, a $10 million 61-unit apartment building a few blocks north of the of the Midas Muffler site.

In 2015—three years before Douglass acquired the Midas Muffler site—he had proposed a 26-floor high-rise at that location.

For that development, Douglass had envisioned 16,000 square feet of ground-floor commercial space and a 10,000-square-foot commercial plaza on the ground floor.

A year earlier, Spokane Valley dentist Philip Rudy had filed a pre-development application with a preliminary concept for an even larger development—a $50 million, 35-story tower with retail, restaurant, office, and residential space.

None of the development concepts proceeded past the pre-development application, which initiates city’s planning phase.

The site is made up of four contiguous parcels totaling nearly an acre of land. It’s occupied by a long-vacant, 11,200-square-foot, L-shaped building, which is the subject of a demolition permit application submitted last week to the city of Spokane. As of Tuesday, the application was under review by the city’s building department.

The leasing agent for the site, Carl Guenzel, of Spokane-based commercial real estate brokerage Kiemle Hagood, says Douglass decided to raze the building because it was being damaged by transients.

“We have to tear it down because the homeless keep breaking into it, and no one wants to lease it,” he says. “It’s brutal.”

Guenzel says Douglass wants to redevelop the site someday. Meantime, “It’s not worth it to try to lease it.”

Rob’s Demolition, of Spokane, is the contractor for the demolition. The city’s description of the demo project says the concrete floor of the building will remain in place.

One such development is the $45.2 million River’s Edge Apartments, under construction in the Atlas District, which is on the north side of the Spokane River, in west Coeur d’Alene. The River’s Edge development will include 12 apartment buildings with 384 living units and a clubhouse.