What’s Happening At: The Falls project 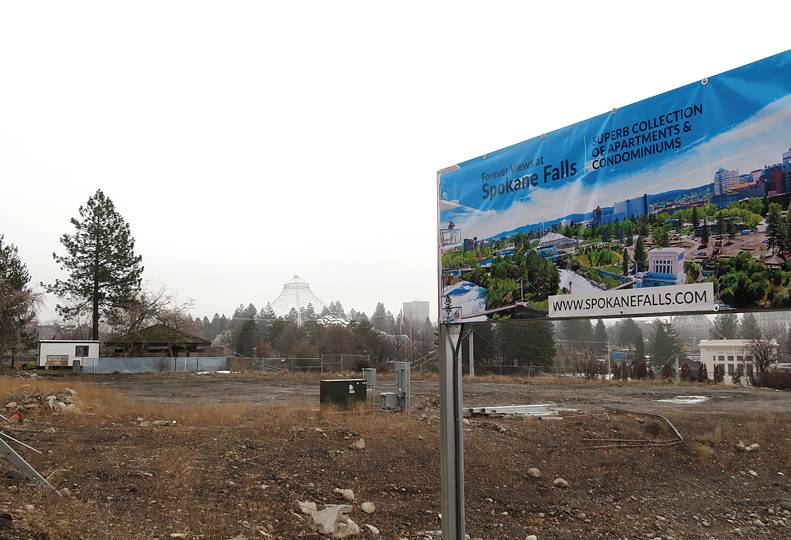 It’s been well over four years since the Journal broke the story about The Falls, a high-rise development planned at the former YWCA site near the Spokane River, and recent activity logged in planning documents indicates the project remains active and possibly a bit larger in scope.

The Falls LLC wants to construct the first of up to three high-rises at 650 N. Lincoln, just north of downtown. The company is led by Spokane developer Lawrence Stone, who also is president and CEO of Scafco Corp.

While a representative of the developer couldn’t be reached immediately by phone or email, Kirstin Davis, the city of Spokane communications manager for public works and community and economic development, says the developer’s team has been in frequent contact with the city’s planners.

A building permit application for The Falls Building 1, which was submitted to the city in early 2019, is currently under plan review, with an expiration date extended through May 5. A sign posted at the site says apartment and condominium units will be available in spring 2024.

The developer demolished the former YWCA facilities in 2019 to clear the site for planned construction. A grading permit approved by the city last summer to allow removal of 40,000 cubic yards of material at the site expired on Jan. 30, according to city records.

The site is at the southeast corner of Broadway Avenue and Lincoln Street, just north of Anthony’s at Spokane Falls restaurant and south of the of the recently redeveloped Wonder Building. Most of the site had an assigned address of 829 W. Broadway when it was occupied by the YWCA.

The latest architectural revisions to The Falls plans show Building 1 will have 24 stories above three levels of underground parking, which is two stories higher than earlier reported, when the project value was estimated at $58 million.

At an envisioned height of 337 feet, The Falls Building 1 would be the tallest structure in Spokane. By comparison, the 20-story Bank of America building, at 601 W. Riverside in downtown Spokane, is Eastern Washington’s tallest building at 288 feet tall.

Building 1 plans also show the tower would have 145 living units, which is 21 more than listed on the original building permit application for the structure. Plans specify 13 penthouse-style units on floors 17 through 23 and a mix of studio, one-bedroom, and two-bedroom apartment units on the lower floors.

UPA Construction Group Inc., of Herriman, Utah, is listed as the contractor.

The Falls LLC purchased the 2.3-acre development site from the YWCA for $3.2 million in late 2010.

The YWCA had earlier consolidated operations with the YMCA when both organizations moved their separate operations to a newly constructed Y building, at 930 N. Monroe, in 2009.

As earlier reported in the Journal, the developer’s long-range plans for the site include up to two additional 10- to 15-story buildings that could include apartment, condominium, hotel, and retail space.